The Years of Lyndon Johnson: Means of Ascent By Robert Caro

The Years of Lyndon Johnson: Means of Ascent
By Robert Caro
Copyright 1990

In his second volume chronicling the life of Lyndon Johnson, Robert Caro explores Johnson's time in the wilderness after losing the special election for the Texas senate seat in 1941. 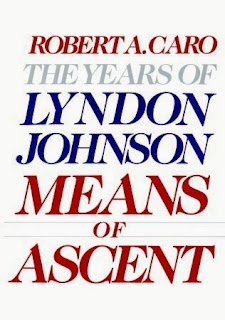 The period between 1942 and 1948 found Johnson at loose ends and without a power base. His most powerful ally, Franklin Roosevelt would soon die. Vice President Harry Truman had never been a fan of the Representative from Texas. After Johnson betrayed him in the 1940 presidential race, House Speaker Sam Rayburn ceased to be a power base. With little seniority, Johnson had nothing to work with.

Without a power base in the House, Johnson quickly grew bored with his position. Caro notes that Johnson had not introduced any meaningful legislation, nor did he speak on the House floor on any issue of particular importance during his tenure in the House. Instead of legislating, Johnson set out to make money.

Johnson acquired an Austin radio station with low wattage and low profits. Using his influence with the FCC, he was able to get the stationed repositioned on the AM dial and boost its power. It is part of the Johnson family history that it was Lady Bird’s business acumen that led the Johnson telecommunications interests to profitability. However, as Caro carefully documents, it was the hand of LBJ that drove the business.

Lyndon Johnson promised his constituents that, if war broke out, he’d leave his congressional seat and join the fighting. Conveniently, he was able to serve in the military while maintaining his seat in the House. He was commissioned as a Lieutenant in the Naval Reserve in 1942 and Caro dissects Johnson’s scant military career, telling the true story that Johnson often embellished through his political career.

Johnson was recruited by Navy Secretary James Forrestal to inspect navy installations in the Southwest Pacific. Johnson and three other naval officers spent much of their time in Texas and California, staying at the finest hotels and dining at the finest restaurants on the military’s tab. Finally, Johnson and his entourage made their way to Australia and reported to Gen. Douglas MacArthur.

Johnson was eager to get a taste of combat and eventually got it. The gods of fate smiled on Johnson that day because he was ordered out of his original seat by a Colonel who was also flying to observe the mission. He was forced to board another plane. The plane to which Johnson was originally assigned was shot down and all hands lost.

Johnson’s plane flew out over the Pacific to attack a Japanese base on New Guinea. Johnson’s plane came under attack and was forced to retreat from the mission. Those who flew with Johnson said he displayed unwavering courage as bullets hit the plane, looking out the windows with great excitement. When Johnson returned, MacArthur unceremoniously pulled a Silver Star out of his desk and presented it Johnson.

That Silver Star became a source of immense pride for Johnson. He soon returned to Washington when Roosevelt recalled active duty members of Congress. He wore that Silver Star on his suit lapel every day and would tell the tale over and over again in the cloak room, at dinner parties and in his district, with the tale growing taller with the telling. However, through interviews with those who flew with Johnson as well as documents from the Department of the Navy, Caro is able to document exactly what happened.

Much of the book is dedicated to examining the 1948 Texas Senate race between Johnson and Texas Governor Coke Stevenson. This election, and the circumstances under which Johnson won it were shrouded in mystery until Caro meticulously documents what transpired in Jim Wells County, specifically at precinct 13.

Caro opens this portion of the book with a thorough thumbnail biography of Coke Stevenson. Stevenson was a larger than life figure and the prototype of the mythical Texan. He was a cowboy from birth. He lived on a remote ranch that had no phone. From birth, the man was pure Texas.

Stevenson was known as a no nonsense politician, deeply conservative, and seldom willing to compromise. It would take a man like Lyndon Johnson to bring out the worst in Coke Stevenson, and Johnson managed to do it.

A loss in 1948 would have doomed Johnson’s career in politics. This time, he would do everything to win. Money was no object as the leadership of the Texas construction firm, Brown & Root were footing most of the bills.

Logistics had been a problem in the last campaign. A statewide campaign in Texas required enormous resources. While money could be raised, time was fixed and traveling across Texas to reach remote voters required a great deal of time. To overcome this, Johnson’s campaign leased a helicopter.

In 1948, most people had never seen a helicopter. Johnson’s whirlybird, dubbed the Johnson City Windmill, drew people from far and wide to see the aviation curiosity. Once drawn to the site, they would stay and listen to the candidate. The helicopter also let Johnson speak to the remote farmer or rancher by hovering over his home and shouting to him through a megaphone.

As before, Johnson pushed himself and his staff relentlessly with two advance teams leapfrogging each other to meet the helicopter. Johnson made slow and steady progress in his uphill climb to defeat Stevenson for the Democratic nomination, but was almost felled when he developed a kidney stone.

Caro documents Johnson’s illness with excruciating detail through interviews with those who traveled with Johnson. Johnson worked for two weeks in horrible agony, often doubling over in pain and vomiting right after leaving a public appearance. He lost weight and looked gaunt. Finally, unable to press on, he agreed to examination by a physician.

Johnson was told he needed surgery which would sideline him for several weeks. Instead, Johnson demanded that the stone be extracted by going in through the urethra. The surgeon was reluctant, but agreed. In what must have been an incredibly painful procedure, the surgeon extracted the stone, delving into the bladder two centimeters beyond what was recommended. Back on his feet the next day, Johnson resumed campaigning.

Johnson attacked Stevenson as a liberal and often misrepresented Stevenson’s positions on issues. Stevenson, behaving like a gentleman, refused to address Johnson’s accusations or even acknowledge Johnson. As his lead shrunk, Stevenson’s advisers begged him to challenge Johnson directly. That had never been the Stevenson way. Finally, in the waning days of the campaign, Stevenson went after Johnson, calling him a liar. Stevenson tried to explain his position on issues, but would never come out and say exactly how he would vote. Johnson goaded one of the most honorable men in political history into name calling and waffling.

When the primary election was held, the state Democratic central committee initially certified that Lyndon Johnson had won the election by just 87 votes. Stevenson immediately cried fraud and demanded an investigation – especially in the circumstances surrounding precinct 13 in Jim Wells County.

Caro documents through interviews with participants how John Connally was able to arrange with election officials in Jim Wells County to “find” an additional 200 votes for Lyndon Johnson in the county. The new voters mysteriously voted in alphabetical order and their handwriting was essentially the same. Stevenson demanded that the ballot box be opened and the actual ballots counted. Despite testimony from voters who said they had not voted election day, the party declined to do so and declared Johnson the winner.

Stevenson mounted a court challenge, but thanks to the able legal efforts of Abe Fortas, the challenge went nowhere. Johnson’s name appeared on the November ballot and he won election to the U.S. Senate.

The book ends with “Landslide Lyndon” arriving in Washington as the new senator from the Lone Star State.

This was the shortest and perhaps least interesting of Caro’s multi-volume biography of Lyndon Johnson. But it was fun reading and exceptional scholarship.

As he did in his first biography, Caro provides extensive biographical information on the subjects who were important in Lyndon Johnson’s life. In this case, his extensive biography of Coke Stevenson not only provided insight into Stevenson’s character and personality, it help cast the 1948 contest as a showdown between principle versus pragmatism. It also was illustrative of the development of Texas as a state at the start of the 20th century.

Caro put a great deal of effort into tracking down and interviewing those who were observers and participants in Lyndon Johnson’s quest for power, In doing so, he’s able to debunk the myth of Lady Bird being the mastermind behind the Johnson telecommunications fortune and, to tell the whole story behind the stolen 1948 Texas senate election.

AS he did in the first volume of what will be a five volume biography, Caro examines the minutia of Lyndon Johnson’s life and in doing so, reveals that Lyndon Johnson was one of the most Machiavellian men in the history of the Republic. The man had no scruples, no conscience, and no morals. He was a man driven by a need to be somebody. As Caro points out, his eyes were already on the presidency.

Caro asks, but does not answer the question, how different would the world be if the Texas Democrats just opened that little black box from precinct 13 and counted the votes?

There’s nothing negative to say about Robert Caro’s exhaustive examination of Lyndon Johnson’s years in the wilderness. He took the least interesting period in Johnson’s life and described it in painstaking detail, giving the reader much greater insight into the man who would shape American foreign and domestic policy long after his