Do Androids Dream of Electric Sheep By Philip K. Dick

It is a common refrain among active readers that the book is always better than the movie. Most of the time, this is true. The written word allows the active exploration of moods, emotions, and motivation. Reading is an active engagement. Movies, on the other hand, are passive. You sit and the action unfolds before your eyes. 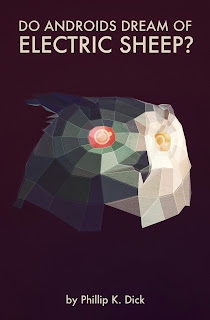 Do Androids Dream of Electric Sheep and the movie based upon it, Blade Runner, are an exception to this. The short novel is a linear story with little character development based primarily on action. The move, however, is a dark, moody affair, bringing to life a bleak dystopia that is the 21st century where men hunt androids and androids are dangerous.

The book opens in the home of Rick Deckard, a bounty hunter who “retires” androids who escape the Martian colony where they function in servitude. The earth is a bleak wasteland following the last world war and the government is encouraging people to move to the new Martian colony. Many sections of Deckards hometown of San Francisco are abandoned.

On the roof of his apartment building, Deckard cares for an android ewe. In the postwar world, all life is valued since so much of it has been destroyed. Those with status own real animals which are quite expensive. Deckard can only afford an artificial animal, but longs for the real thing.

Deckard and his wife are fighting and she plugs into a mood altering device that links her to the world's leading religious figure, Mercer, to distract herself. He receives a call from a local police agency from who he frequently receives cases. The regular bouny hunter for the northern California district has been wounded by an android he was trying to retire. They need Deckard to hunt down and destroy six Nexus-6 androids. Deckard accepts the case.

Meanwhile, in an all but abandoned apartment building in San Francisco, Rick Isidore leads the droning existence of a man with a low IQ. He is intrigued when, out of nowhere, a woman moves into one of the many vacant apartments in his building. He introduces herself to her and they become acquaintances.

Deckard travels to Seattle where he meets with the head of the Rosen Corporation that manufactures the Nexus-6. He administers an empathy test that is used to determine whether or not a being an android to Rosen’s niece, Rachael. Deckard suspects Rachael is an android and his suspicions are confirmed when she tries to bribe him into abandoning his assignment with the gift of a real owl.

Deckard retires the first two Nexus-6 androids he finds with little difficulty. With some cash in his pocket, Deckard buys a real goat to keep on his roof.

When Deckard retires his third Nexus-6, he has an attack of conscience and begins to doubt his own humanity. He wonders if he, in fact, has any empathy in him when he is able to dispatch his targets with such dispassion. His doubt deepens when he is arrested and forced to escape from a police station staffed entirely by androids. He escapes with the assistance of a fellow bounty hunter who he suspects is an android.

Meanwhile, the three remaining androids have gathered at the apartment building where Rick Isidore lives. They con him into helping them hide from Deckard who is closing in. When Deckard arrives at the building, he finds Rachael there. With his doubts of his own humanity in his head, he makes love with and professes his love for Rachael.

Rachael reciprocates by telling Deckard that she has slept with many bounty hunters to dissuade them from killing androids. Angry at her and at himself, he tells Rachael to go home. She leaves and he resumes his hunt.

Deckard eventually finds the androids holed up in Isidore’s apartment. He dispatches them with little difficulty and leaves. He flees north to Oregon to meditate. There, he finds a toad. Toads are thought to be extinct and are held in high esteem by the postwar’s leading religious figure, Mercer. He discovers that Mercer is simply a drunk in a makeshift television studio in Indiana. He also learns that the world’s leading television host is an android.

He returns home to his wife, beguiled by the toad and convinced of his own humanity. His wife tells him that Rachael has paid them a visit and pushed their goat off of the roof, killing it. The book ends with Deckard’s wife discovering that the toad is artificial.

Do Androids Dream of Electric Sheep was selected by my book club. The theme was “a book that was inferior to the movie.” We watched Blade Runner after discussing the book and we unanimously agreed the movie was superior.

The book, despite its linear plot, was an exploration of what it is to be a human being. Is empathy an essential requirement of humanity? Can machines ever feel empathy? The obvious answer to the second question is no, not as technology exists. If we are to believe that our humanity rests within a soul, then machines will never acquire empathy.

The answer to the first question is much more difficult and the essence of Dick’s challenge to the reader. As we discussed the book, I related it to a real world incident where it would seem that a human being voluntarily divested himself of humanity.

In his defense of his conduct during the My Lai massacre, Lt. William Calley described how the military had taught him that the enemy was not human. It was a being to be destroyed with dispassion. If one reads an account of what Calley and his men did to the people of My Lai, it is apparent that he took that lesson to heart. Did Calley ever possess empathy for his fellow man, only later to have the military drive it from him? Only William Calley knows.

The other real life event that I related to this book was the 16th Street Baptist Church bombing in 1963. Four young girls were killed when members of the Ku Klux Klan bombed the church. I recall, as a youngster, seeing an interview with an Alabaman Klansman who said, “When I find a nest of rattlesnakes, I don’t just kill the momma. I kill the babies too.” Obviously this man was devoid of human empathy.

Philip K. Dick, like so many of the science fiction writers held in high esteem today started out writing for the pulp magazines in the 1930s and 1940s. Pulp writers tend to tell fast paced stories with linear plots. That was what editors demanded and readers wanted. When one reads the works of Richard Matheson, Ray Bradbury, and Philip K. Dick, this is what one finds. Sometimes, the story suffers for it.

The chief criticism of this book was what wasn’t there. There was little character development an absolutely no subplots. The battle scenes which should have generated excitement, were rather anticlimactic and disposed of quickly, reminiscent of Edgar Rice Burroughs. Although Dick tells us there is a meaningful relationship between man and nature after mother nature is nearly destroyed, he did little to explore this relationship.

I’ve not read a lot of Philip K. Dick and this is the first novel I’ve read by him. I’ve been told it is not one of his best. I hope not. While Blade Runner is a visually stunning, exciting chase movie with great battle scenes and an interesting plot twist at the end. Do Androids Dream of Electric Sheep leaves the reader longing for excitement and just a little puzzled by its ending. But the introspection it generates makes it a worthwhile read.

Posted by Brian Schwartz at 2:26 PM