New Introduction
After the successful publication of the Dangerous Visions anthology in hardback in 1967, the anthology was broken up into three paperback volumes. In volume 2 of this cycle, Ellison writes a new introduction to describe the impact the anthology has had on the publishing industry and the effect it has had on writing science fiction. He also takes a moment to excerpt a couple letters written to him and to discuss the censorship efforts directed at the anthology. 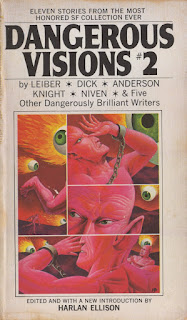 The Man who Went to the Moon – Twice by Howard Rodman
A little boy caught in a hot air balloon returns to terra firma claiming he has traveled to the moon. He is an instant celebrity and visited by many dignitaries. Decades later, as an old man, he repeats the accomplishment. This time, he is dismissed as an old quack and people care very little for his accomplishment.

Rodman would have us reflect on technological marvels and accomplishments and how they cease to be marvels and become parts of ordinary life with the passage of time. Rodman’s writing has a Twain tone to it in the beginning, then takes on a much more morose tone of perhaps Bierce at the end. A worthwhile entry in Ellison’s groundbreaking anthology.

Faith of Our Fathers by Philip K. Dick
Many years after the Vietnam war, the communists have won and taken over the United States and other parts of the world. A low level party official is provided an opportunity for advancement within the party. But one evening, he takes some snuff provided by a street vendor and has his eyes opened to the nature of his government and its leader.

Philip K. Dick was well known for his use of psychedelics. Here, he explores the oft-reported religious experience many LSD users experience and how it might be useful in discerning the nature of God, the government, and religion. The end of this story left a little to be desired. But, like many Dick stories, leaves you pondering its meaning while providing a worthwhile narrative.

The Jigsaw Man by Larry Niven
A condemned prisoner escapes death row in a society that harvests organs from those executed. He strikes back at society by destroying an organ donation center. When he is captured and tried, the prosecution doesn’t even bother introducing those charges. They have other charges that are easier to convict him on.

Maybe it rang ominous in 1966. Today it’s just shrill and alarmist. One of the few tales in this anthology completely destroyed by the passage of time.

Gonna Roll the Bones by Fritz Leiber
A man enters a casino in Hades to gamble with a demon. They dice for the man’s soul.

I so wanted to like this story because Leiber is a legend and I’ve not read him before. But this story, which Leiber admitted was an oft-told tale, was overwritten with long, run-on sentences and needless alliteration. It would appear many disagree with me since this story won both the Hugo and Nebula Award for best novella.

Lord Randy, My Son by Joe L. Hensley
A middle-aged lawyer deals with day to day life with his mentally challenged (autistic?) son. His son, Randy has the ability to mete out justice to the wicked and conjure kindness from the misunderstood. But all his father can see is the disability.

Autism is not quite the mystery today it was in the 1960s. It may have been quite revolutionary (dangerous) to assign special powers or savant skills to the mentally challenged. Today, it’s an old trope. Nonetheless, Hensley writes an effectively moody story that hits all the right emotional chords to achieve his goal.

Eutopia by Poul Anderson
In an alternative world, a cultural researcher flees a land after seducing the child of its ruler. He is pursued into a neighboring land and the leader of that land agrees to give him refuge and transport him home. When he arrives in his homeland of Eutopia, he complains to his boss of the crude and barbaric behavior of other lands. But it is revealed that our hero has engaged in some of the most verboten behavior himself.

I didn’t see the twist coming and I didn’t see that Anderson provided many clues. His lyrical prose made this story sometimes difficult to read, but he paced it well and with the last sentence demonstrated why this story was indeed a dangerous vision.

Incident in Moderan by David R. Bunch
A war is fought for the sake of war. A cease fire is declared to allow an enemy to repair his weaponry and defenses so that hate of the enemy can continue to feed the war. But the enemy mistakes it as an earnest cease fire to allow them to honor their dead.

The subtext of the futility of war and the need for a propaganda machine to feed hatred of the enemy is not subtle. The story is well paced and just the right length to make it enjoyable without repeatedly ramming the subtext home.

The Escaping by David R. Bunch
A being performs a daily stunt for those who watch him perform. One day, while folding air, he thumbs his nose at his audience and escapes in his space egg.

I just hate when sci-fi becomes literary garbage. That is what this is. David Bunch got two stories in this most famous anthology and the second one a stream of words marching across the page in search of an idea or a plot.

The Doll-House by James Cross
A man and his family are living well beyond their means and robbing Peter to pay Paul, waiting for the inevitable crash. The man appeals to his wife’s uncle who he believes is wealthy. Instead of giving him money, the uncle provides a doll house inhabited by a tiny prognosticator. He uses it to build wealth until it once again comes crashing down around him.

This is a retelling of that timeless classic about the goose who laid the golden eggs. Cross gives the tale just enough twists to make it worth reading. One of the best in the book so far.

Sex and/or Mr. Morrison by Carol Ermshwiller
A petite creature secludes herself in the boarding house room of her obese neighbor and watches him undress, fascinated by human nakedness.

Not as lurid as it sounds, nor as interesting – and not because it is not lurid.

Shall the Dust Praise Thee by Damon Knight
The Christian God comes to Earth to judge mankind and finds that they have annihilated themselves in war. Man’s final plea is etched upon a stone in Britain: “Where were you?”

Difficult prose sometimes concealed what was an interesting story about God written by an atheist.

Posted by Brian Schwartz at 2:22 PM