Paul Annendale takes his children, Mark and Rya, camping near the small, New England town of Black Water. Little does he – or the residents of Black Water – know that the town has been brainwashed by an evil corporate mastermind as a test case for eventual world domination. 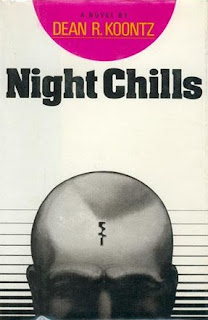 Scientist Ogden Salsbury and millionaire Leonard Dawson have concocted a scheme to pollute the town’s water supply with a serum that will make the residents particularly susceptible to subliminal advertising. Then, using various media purchased by a dummy corporation, inculcate the residents with subliminal suggestions through advertising and messages inserted in movies, opening their mind to absolute control using simple keywords.

Young Mark stumbles onto Salsbury toying with one of the town’s residents and pays the price. Paul, his girlfriend and her father search the town for Mark and learn the horrible secret of Salsbury’s domination. Untainted by exposure to the poisoned water, they are the only ones left in Black Water that can fight the evil.

This was an early entry by Dean Koontz and it is strongly plotted. It moves along quite nicely and has a little love story as a subplot. Koontz certainly can tell a story and his use of flashback to explain the development of the serum and the program to dominate the world is particularly effective.

What stands out strongly in this book is the erotica. This has always been a Koontz strength and what sets him apart from most other writers in the horror genre. It is entirely sadistic with Ogden Salsbury either dominating or thinking about dominating women sexually with his mind control technique.

I’ve read reviews – mostly by women – who feel this is gratuitous and unnecessary sexploitation in the novel. I disagree wholeheartedly. It establishes the effectiveness of Salsbury’s programming. It shows the reader just how strong and effective it is. Without these two or three scenes, the novel would have been rather flat and dull.

The characters are a bit thin. But they do reflect a writer still honing his craft. Paul is well developed as the pining widower looking to move on with his life with a new woman. But Ogden Salsbury is just a bit cartoonish. He really lacks complexity. All we know is that he has mommy issues and horrible fear and hatred of women. Koontz doesn’t give us much more than that. But it’s enough to make this short novel work.

This is one of the earliest Koontz novels I’ve read and, to my knowledge, this is the first use of a frequent Koontz villain – the evil corporation. Koontz employs this device again and again in many books with varying results. It worked well in the novel, Midnight. Here, it works on a superficial level as a vehicle for a mad villain. Again, we are talking about a fairly short novel. So, it only takes the bare essential elements to make it work.

I’ve always had mixed feelings about Dean Koontz. I enjoy his early work much, much more than his later stuff. He’s always been a bit of a novel factory. But, in his later work, the heroes were all great overachievers and there was always a dog. I like dogs well enough. But one dog novel is enough for anyone.

That said, Night Chills is a work by a young author who was not yet trapped in a formula or recycling characters. It is thin and short. But sometimes, that can be fun and Night Chills was an easy, fun read.

Posted by Brian Schwartz at 1:04 AM