House of Reckoning By John Saul 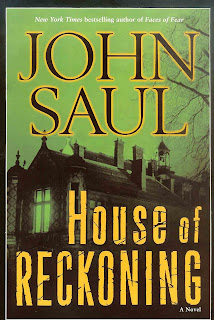 John Saul has published 31 novels over 32 years and has had several of his works appear on the New York Times Bestseller List. For all of his success, he is rarely mentioned in the company of better known, but less prolific writers.

I first read John Saul in the early 1990s when a friend lent me a copy of Second Child. Since then, I’ve read his entire body of work at least twice. Saul is a consistently good writer. Some of his books are not so good, but none of them are so bad that they are unreadable. Dean Koontz can’t make that claim. And while he’s published no magnum opus or great work that will define him like Robert McCammon did with Swan Song, he published many good and a few great books.

Saul relies on just a couple simple plot devices to tell his stories. They almost always have adolescents as their central characters. Those adolescents are usually social outcasts. Sometimes they are unloved and tormented at home as well. And there is always some malevolent force present to exploit those children’s alienation.

Such as it is in Saul’s latest book, House of Reckoning. Fifteen year old Sarah Crane is left to tend to her father’s farm after her mother dies because her father has fallen into an alcohol lubricated pit of despair and self pity after the death of his wife. One night as she walks to the neighborhood bar to find her father, she is struck a pickup truck on a country road – a pickup truck driven by her drunken father. Her father is on his way home having accidentally killed a man in a bar fight.

Dad ends up going to prison and Sarah is moved to a new town to live with a foster family whose father is a guard at the prison where Sarah’s dad is incarcerated. They welcome Sarah’s arrival in their home because she is a source of revenue from the county and a source of cheap labor as they immediately make her into a house servant.

Her status as the new kid and her pronounced limp permanently inflicted upon her by her accident, make her the subject of derision and scorn at the local high school. The only person who is nice to her is her art teacher who is also scorned in this conservative religious community for being a witch. Teacher Bettina Phillips inhabits an ancient mansion that is her ancestral home and served as the living quarters for her great grandparents several generations back who served as wardens of that prison for the criminally insane. Local residents socially shun her and her slowly decaying mansion.

Elsewhere in this small Vermont town there is a fifteen year old boy who hears voices in his head almost constantly. His strange behavior makes him the object of the school bullies who verbally torment him which they know makes the voices in his head yell louder, driving him to the brink of insanity. A chance encounter with Sarah reveals that her presence silences the voices. As outcasts, they are drawn together emotionally.

Sarah’s talent as an artist begins to manifest itself in ghastly ways. Without conscious thought, she paints scenes of murder and death, all taking place within the confines of her art teacher’s home. As Sarah paints, Eric lives out the horror that Sarah conveys to her canvass. It becomes apparent that the two children have a mystical link to each other and to the mansion known as Shutters.

Bettina, while exploring the ancient files left from the prison by her great, great, great grandfather, she finds a manuscript of short stories that describe acts that would make Poe cringe. When Sarah’s paintings begin to depict these unspeakable acts set within the confines of Shutters, Bettina suspects that these are not works of fiction, but rather documentation of actual events.

These suspicions grow as Sarah and Nick inadvertently act out some of these macabre tails. After having painted a picture of a man disemboweling a dog, the two are attacked by a dog set upon them by a school bully who is also the son of the sheriff. As the dog leaps to attack, Nick cuts it from chest to anus, neatly and cleanly. The dog falls dead, disemboweled. This, despite the fact that Nick had no weapon his hand.

Later, after Sarah has painted a picture of people burning alive, the sheriff’s son and the daughter of Sarah’s foster parents try to run them down on a country road. Nick, without thinking, sets the car afire and careening off the roadway. The sheriff’s son dies and only the wicked foster sister is left to tell an insane tale of witchcraft.

Sarah’s association with the art teacher has earned her the scorn and anger of her foster parents who lock her in an attic at night. Nick becomes increasingly concerned that his father is going to send him back to a mental hospital where he might never leave.

Both flee to the Shutter and Bettina Phillips to put an end to the madness. They delve deep into the endless catacombs of the ancient home. The sheriff, Nick’s father, and Sarah’s foster parents all arrive at the house and are drawn by a irresistible force to another time when the catacombs served as a private playground for a sadistic warden. To that time and that hell, each are consigned.

While this unfolds, Sarah learns that she has deep ties to the Phillips family and to Shutters and the grounds of the old asylum. She also finds she has blood ties to Nick. With the evil foster parents gone, the social worker places Sarah to live with Bettina Phillips and they all live happily ever after. . .

I would rank this as one of Saul’s average works. As I stated, this is a plot device that Saul has employed often and one has to think that this book was written on autopilot or with software assistance. Saul has been successful reusing formulas in the past because he makes each setting different and creates distinctive, if not well developed characters. These characters are atypical of Saul’s work for their lack of distinction in their development.

Saul develops adolescent characters well and has honed his talent for it over the years. He makes his pitiful heroes incredibly sympathetic and their tormentors purely hateful. It is not through introspection that Saul develops these characters, but through actions. He doesn’t achieve that effect in this story.

We have absolutely no backstory to provide motivation for the chief antagonist, the sheriff’s son. We learn nothing of his personality, his upbringing, some prior grudge he might hold. Nothing seems to motivate him. The foster parents get slightly better treatment and are well developed as greedy, uneducated, lower middle class with a wide narcissistic streak. Their frequent conflicts with Sarah are the only effective character development in the book. Eric is developed through minimal introspection. In the narrative, we experience Nick’s frustration and torment with the voices that bedevil him, but we could have felt more sympathy for him had his torment been given more development through a little more backstory.

The chief failing of the book is the underdevelopment of Shutters. Saul tells wonderful haunted house stories and frequently uses a prologue to the story to develop whatever malevolent force inhabits the dwelling. With Shutters, there is no prologue to give us a hint of the evil. Having Bettina read to us from the uncovered manuscripts might have done a great deal to make the house more terrifying. Other than the recollections of what Bettina was told as a child, we are told scant little about the horrific events that played out in the home’s cellar that lead to the downfall of Sarah and Nick’s tormenters.

Finally, for a reason that is never explained, Saul lifts a few pages from Robert Marasco’s Burnt Offerings as Shutters seems to repair itself a little with each event that transpires. The source of this rejuvenation is never revealed. It’s purpose never explained.

When Saul fails, it is usually because he leaves a lot of story on the table. There were so many subplots that could have been developed in this book. Nick doing battle with the voices, motivation for the sheriff’s son’s hatred of Nick, the evil history of the house. Saul touched none of it.

Saul has no lengthy tomes to his credit. His books average around 300 pages each. If he would free himself of this page constraint, there’s no telling how terrifying tale he could tell.
Posted by Brian Schwartz at 3:58 PM