When King wrapped up Needful Things, he made it clear that he was going in a different direction with his writing. He wiped out Castle Rock because he’d felt that he’d visited the “strange little town,” once too often and might be tempted to do so again. In Gerald’s Game, King indeed takes his writing in a much different direction, much to the dismay of the fans of his horror novels. 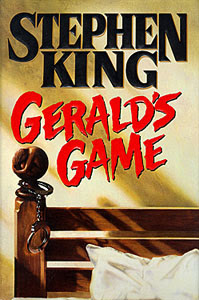 Jessie Burlingame and her husband, Gerald are at their cabin in the Maine woods. Gerald has just handcuffed Jessie to the bed in preparation for a little bondage sex. Jessie’s not into it today and tries to tell Gerald so, but he’s not listening. He thinks it’s part of the act. When he prepares to mount her, Jessie kicks him in the crotch. Gerald is momentarily stunned by the kick to the gonads, then dies, presumably of a heart attack.

Jessie Burlingame is handcuffed to a bed in a remote cabin in the woods of Maine. She is alone.

After a few vain attempts at escape, her mind starts to wander and various voices – voices she’s heard her entire life – start talking to her. The voice she calls Goodwife Burlingame – or Goody for short – tells her she should have just let Gerald do his thing and be done with it. Had she done that, they’d be enjoying dinner. The voice of her old college roommate, Ruth Neary, tells her to hang tough and that Gerald got what he deserved. Ruth, we learn was part of the Women’s Lib movement in the early 1970s.

After several hours in the uncomfortable repose, Jessie becomes quite thirsty. Gerald – ever the creature of habit – always places a glass of ice water on the headboard before sex. For several pages, we follow Jessie’ struggle to get that glass of water and fashion a straw out of a subscription card to allow her to drink.

Hours later, a stray dog enters the room. It is near starvation, being a former pet dumped in the Maine wilderness to fend for itself. To this dog, Gerald is a banquet. While Jessie lies helplessly trapped, the dog dines on her late husband.

The smell of minerals in the water trigger something in Jessie’s memory – something unpleasant. She resists remembering. She recalls that she was going to a therapist several years before and when the therapist had delved toward these memories, she quit going. When her roommate noticed that she was about to spill the beans on something at a feminist consciousness event, she pressured Jessie to reveal her secret. Instead, Jessie moved out of the room she shared with Ruth.

With her thirst sated and no new escape ideas coming to her, she lapses into a light sleep. The voices begin arguing. Goody says to leave the memory buried. A new voice called, “Punkin” says out with it. Despite her best efforts to repress it, the events during the solar eclipse of 1963 reemerge in Jessie’s mind.

Jessie is just 12 years old. Everybody who has a summer home on Dark Score Lake in Maine is excited about the imminent eclipse because Dark Score Lake is in the path of totality. All of the residents plan to travel to New Hampshire’s tallest mountain to view the event. But Jessie is staying at the cabin with Daddy while the rest of the family goes.

Jessie recalls with clarity how her dad fashioned an eclipse viewer out of panes of glass smoked over an open fire. He then invites Jessie to sit on his lap and look through the viewer at the eclipse.

Jessie, with just the vaguest notions of what sex is and the anatomy of the human male, is oblivious to her father’s arousal. She moves and squirms with excitement over the disappearing sun, intensifying her father’s arousal. As the eclipse reaches totality, he has an orgasm, leaving semen on her dress. She then realizes that something very bad has happened.

During the eclipse, Jessie’s mind glimpses a middle aged woman looking down into a hole. Behind the woman, the eclipse has blocked out the sun. Jessie has no idea who this woman is. We will learn about her and her experiences during the eclipse of 1963 in King’s next book.

Jessie is distraught about what just happened. She goes to the bathroom, vomits, and begins to clean herself up. Her father comes in and apologizes. They agree that it will be their secret. Jessie’s father never molests her again. When she awakens from the dream with the memory completely recovered, she is angry at the voices for making her remember it and angry at her father, although she finally decides that many men have done many worse things to their daughters and lets him off the hook in her mind.

During the night, she is visited by what she can only believe is an apparition. A tall man enters the room and sits in a chair near the bed. Most of his features are concealed by shadows. He carries with him a wicker fishing creel. He leans forward so Jessie can see the elongated, distorted features of his face. He smiles and opens his creel which is full of bones and jewelry. Jessie passes out from fear. When she awakens, he is gone. But a single earing lies on the floor, positive proof that the apparition was not in her mind, but very real.

The next day brings a realization to Jessie that she has to get out today or she will never get out. Her muscles are failing from being stretched and pulled. She has run out of water. The keys are on the dresser many feet away. She has no idea how she will get free.

The voice in her head she calls “punkin” for its childish demeanor continues to coach her. Finally, she comes to the realization that if she cuts herself, the blood might act as a lubricant to allow the cuffs to slide over the bony protrusion of her thumb and free herself. She breaks the drinking glass and cuts her wrist deeply enough to get a good flow of blood going. She then pulls hard, tearing skin and literally peeling her hand until one is free.

The sun has gone down and the voices in her head tell her the apparition she has named “The Space Cowboy” is going to return. She pulls the bed over to the dresser and reaches for the keys. She drops the first one. She is able to fit the second one into the lock. She then passes out from blood loss.

She awakens and it is night. The Space Cowboy has returned and is in the room with her. She shouts at him and he remains motionless, just studying her. Finally, she throws her wedding ring at her and flees. She grabs her husband’s car keys and jumps into their Mercedes. She gets it started and starts out of the driveway. She reaches the country road and turns toward the main highway when she looks up and sees the Space Cowboy in her backseat. She loses control of the car and crashes it.

We flash forward several months. Jessie is recuperating with the help of a nursemaid. Her hand is badly damaged and it will take many months to heal. She is typing a letter to her old college roommate, recounting the events. Some of it is philosophical about the evil men do and other parts of it tell a tale about a necrophiliac who has recently been arrested.

It seems that Raymond Andrew Joubet has been robbing graves all over rural Maine for more than a decade, stealing jewelry and defiling corpses. He himself was a victim of sexual abuse at an early age and had a disease which caused his features to be misshapen.

Jessie is eager to find out of Raymond Andrew Joubet was the man in the house with her that night, so she attends his arraignment. While in court, Joubet turns to her and mimics her position in that bed that night with her arms splayed. She spits in his face as her lawyer pulls her from the courtroom.

Her letter to her old feminist friend completed, she feels a catharsis. She insists that someday, she will be all right. After completing the letter, she lays down to sleep and for the first time since the incident, her dreams are not haunted.

I hated this book and hated it for so many reasons. I rank it as his second worst, only better than the dreadful Lisey's Story.

Primarily I hated it because it was not a good story. Stephen King always preached that stories did not have to be allegories or contain a sermon. Yet, with Gerald’s Game, we get nothing but a lecture about how men abuse women. Before Gerald’s Game King’s Constant Reader could count on a story told for the sake of a good story. This book tries to lecture the Constant Reader. Thank you Mr. King, but I have my own ideas on men and women and how they relate!

The worst part was the end where King said, “Oh yeah, I need to explain that apparition I put in the story to inject a little tension and horror.” That’s a story teller’s cop out. The framework of this book is so bad that I can’t begin to suggest how Joubet’s identity could have been woven into the fabric rather than tacked on. But the entire resolution of the book was Stephen King saying, “Let me explain to you what you just read.” If he has to explain it to me, he didn’t tell me a very good story.

King would follow Gerald’s Game with Delores Claiborne, a slightly better novel about the mean things men do to women. Then he would move on to lecture us about how men oppress women via abortion policy and spousal abuse in Insomnia. He would end his five year obsession with gender politics by giving us the ultimate predator husband in Rose Madder. In between, he’d release Nightmares and Dreamscapes which was an average (and his worst) collection of short stories.

Perhaps part of my intense displeasure with Gerald’s Game is that it kicked off this period in King’s writing career that was so dissatisfying for me -- King’s Constant Reader. I read Stephen King because he tells a tale – be it horror or mainstream suspense – better than anyone else in the business. I’ll get my politics elsewhere. I don’t want them mixed with my escapist fiction.

Posted by Brian Schwartz at 6:29 PM