Back in the present time, Paul tells us more about the rest home where he resides and how he passes his days. He has a “ladyfriend” named Elaine in whom he confides. One night, Paul falls asleep in the TV room and has a nightmare about the fight with Billy the Kid and wakes up screaming. Elaine is there to comfort him and Paul again takes us back to 1932 and the Green Mile. 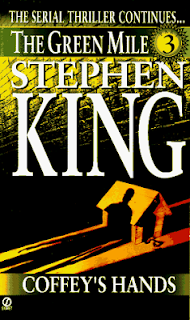 The fight to secure William Wharton is brutal with Brutus’ throat being badly injured. The guards eventually knock him unconscious and secure him in his cell. As the days pass, Billy the Kid makes a nuisance of himself and is subjected to the occasional club over the head and days secured in a straight jacket in the padded cell.

The pain of Paul’s bladder infection has become nearly intolerable. One day, Paul is alone on the Mile and John Coffey asks Paul to come into his cell. Against regulations and every instinct, Paul goes in and sits down next to Coffey on his bunk. Coffey reaches over and grabs Paul’s crotch. Paul feels a charge of something resembling electricity pass through his body. Coffey removes his hand and Paul’s urinary tract feels fine. He asks, “What did you do?” Coffey responds with his own question: “I made it better, right?”

Meanwhile Warden Moore’s wife is getting worse, her tumor working its way deeper into her brain. Paul and his wife visit the Moore’s and are stricken over how badly this once vital woman has become weak and frail.

Curious about John Coffey, Paul takes a day to visit the reporter who covered Coffey’s trial. He asks the reporter about Coffey’s history. The reporter says it’s odd, because as far as he could tell, no one knew John Coffey or had seen him prior to his arrest.

The time comes to prepare Eduard Delacroix to walk his final walk. He is taken off the Mile to put on a show for some prison officials with Mr. Jingles. Percy is promised the role of being out front on the execution. Paul shows him how it is done. They rehearse twice and everybody knows their part.

Delacroix knows the end is near and wants Paul and the others to promise him they’ll take care of Mr. Jingles. Brutus says they’ll send him to “Mouseville” in Tallahassee, Florida – a tourist attraction featuring trained mice. Brutus conjures this fictional place to calm the worried Delacroix. He is pleased that Mr. Jingles is going to be a star somewhere.

As Delacroix is basking in his relief, Mr Jingles emerges from his cell. Without warning, Percy stomps on him and crushes him. He nonchalantly says, “I knew I’d get him sooner or later.” The book ends with Delacroix crying out in anguish.

We now have two mystical beings on the Mile. The mysterious mouse who shows incredible intelligence and brings comfort to a doomed man. We have the convicted pedophile who raped and murdered two girls who seemingly performs a miracle of healing. The first three books have been about setting the scene and developing the characters. The story will kick into high gear in book four, the title of which foreshadows bad events. The Bad Death of Eduard Delacroix.

King waits until his third volume (of six) to get underway with the development of his main character. Such is the way of Stephen King. He creates an enigma in the enormous, seemingly gentle giant who was convicted of the most heinous crime our society knows. It is in this installment that we get the notion of something, "divine" occurring in Hell's waiting room.

The essay contest at the end of Coffey on the Mile asks: “King constantly portrays Percy as much less sympathetically than Delacroix or Coffey. What is he trying to say?”

Posted by Brian Schwartz at 6:26 PM