Paul Edgecombe brings us into his present by introducing the reader to the nursing home in which he is living out his final days. In that nursing home is a nasty orderly that reminds Paul very much of Percy Wetmore. 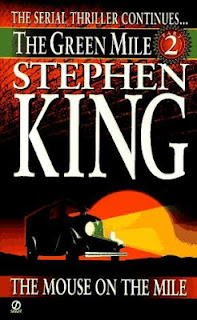 He then flashes back to the time before the arrival of Eduard Delacroix and John Coffey when a Cherokee Indian and a man they dub, “The President” are the inhabitants of the Green Mile. This is when the mouse that would become Eduard Delacroix’s pal, Mr. Jingles makes his first appearance.

Mr. Jingles shows up one day, weeks before Eduard Delacroix is locked up on death row, running out of the restraint room where unruly prisoners are kept for safety. It is empty of people and full of supplies. The guards watch as the mouse makes an inspection of vacant cells, then approaches the desk. The guards feed the mouse and watch with fascination as he delicately dissects the piece of sandwich before eating it. They name him “Steamboat Willy” after the famous forerunner to Mickey Mouse.

Steamboat Willy makes daily appearances on the Mile, searching the cells. He interacts with the guards on the mile, but ignores the people who pass in and out of the area. He is only interested in interacting with death row personnel. Percy, being a pain in the ass, makes several attempts to kill Steamboat Willy. But the wily mouse avoids him. Willy eventually finds what he’s looking for in Eduard Delacroix and befriends the doomed man. They are fast friends and Delacroix rechristens him, Mr. Jingles.

The time comes for The Chief to die in the electric chair and Paul explains the rehearsal prior to the actual execution and the final moments of the Indian’s life as the real event occurs. After the rehearsal, the Chief makes the walk down the Green Mile and meets his maker.

After taking us back in time, before the arrival of Eduard Delacroix and John Coffey, Paul Edgecomb takes his narrative forward to when Mr. Jingles and Delacroix first make their acquaintance. The mouse, Delacroix claims, whispers things into his ears and performs amazing tricks like pushing a spool across the floor. The guards are amazed and happy because with something to entertain him, Eduard Delacroix will be less of a problem.

But problems are coming for the men on the Mile. Paul learns that Warden Moore’s wife has been diagnosed with a brain tumor. It’s not operable and certainly fatal. Then Paul learns that he’s getting a real bad apple in his block in the form of William Wharton – self dubbed “Billy the Kid.” Billy is a bad actor and Paul is not looking forward to his arrival. With his bladder infection raging worse than ever, Paul is miserable.

William Wharton arrives on the Mile and trouble ensues. He is able to wrap the chain of his cuffs around Brutus’ neck and try to strangle him. Percy freezes. Paul comes out of his office and looks into the eyes of William Wharton and sees the eyes of an animal.

Reading the story straight through, the flashback in a flashback is not disconcerting and is seamlessly weaved into the story. When I read it as it was being serialized, I felt a little cheated because I wanted the story to move forward. It did, a little. But reading The Mouse On the Mile the first time was a frustrating experience.

We did get more backstory on Paul. We learned the procedure for executing inmates in the electric chair (this information will become important as they prepare to execute Eduard Delacroix). We also get the development of a key character in the story – the mouse, Mr. Jingles.

The book ends with another essay contest. The question to be answered is: “It is said in the book that the guards have no real power over the prisoners on The Green Mile. What does this mean?”

Posted by Brian Schwartz at 3:14 AM

Labels: Mouse on the Mile, Stephen King, The Green Mile