A Clash of Kings By George R.R. Martin

A Clash of Kings
Book Two of A Song of Ice and Fire
By George R.R. Martin
Copyright 1998

Volume two in George R.R. Martin’s epic tale about the land of Westeros introduces elements commonly found in traditional fantasy novels that were missing in A Game of Thrones. Dragons, mages, and magic are brought into play.

The story picks up just a short period after A Game of Thrones. Five men have now declared themselves King of Westeros. The demented boy king, Joffrey sits upon the throne at King’s Landing. Robb Stark is at Riverrun, having declared himself king of the north. Stannis Baratheon and his brother Renly, have laid claim to the throne as heirs of the late King Robert Baratheon. Balon Greyjoy has declared himself king of the seafaring people of the Iron Islands. 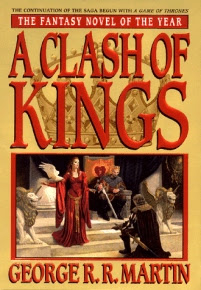 A Clash of Kings contains much strategizing, diplomacy, and stealth, but is short on action until the climactic battle at King’s Landing.

Stannis and Renly squabble over who is the rightful heir to their brother. Stannis has found a new religion in the goddess, R’hlorr and her priestess, Melisandre. Catelyn Stark arrives in Stannis’s camp to seek an alliance on behalf of their son so they can combine their forces to defeat Joffrey, upon whom the Starks want revenge for killing Catelyn’s husband, Lord Eddard Stark.

Stannis politely rebuffs Catelyn’s overtures, determined to defeat his brother on the field to dominate the lands of south Westeros. As Caitlyn and Stannis are talking, a discorporate shadow appears with a sword and runs it through Stannis. Caitlyn escapes from Stannis’ camp with a warrior woman, Brienne, to return north empty handed. Most of Renly’s men switch their allegiance to Lord Stannis who prepares to march on King’s Landing.

The dwarf, Tyrion Lannister returns to King’s Landing where he’s to serve as The Hand of the King to young Joffrey – much to the consternation of his sister, Cersei. While Cersei and Joffrey are willing to stand by while people starve and grow to hate the Lannisters, Tyrion works to feed them and, if not earn their loyalty, to stave their hate just some.

Tyrion also starts to develop a strategy for the defense of Kings Landing should one or both of the Baratheon brothers march against it. Beneath the castle in King’s Landing rests many casks of a quick burning incendiary liquid that Tyrion sees as the key to that defense.

In the north, Winterfell falls when Theon Greyjoy, acting on behalf of his father, Balon, takes the castle while eight year old Bran Stark commands. Bran and Rickon are forced to flee with assistance of two mystics of their kingdom. Theon pursues the two princes and would have the people of Winterfell believe he captured and beheaded them by posting two tarred and disfigured heads on pikes outside Winterfell.

Theon only has thirty men and realizes his position is weak. He tells an aide, Ramsay Snow that he can have any woman of his choice within Winterfell if he can raise 200 men. Snow returns with 300 and is welcomed back into Winterfell. However, Ramsay Snow has a different idea and turns on Greyjoy. The former allies battle it out as Winterfell burns. Beneath the castle, Bran and Rickon hide, waiting for the opportune diversion to escape into the woods.

Although the reader is afforded no narrative or eyewitness accounts of the battles, we learn that Robb Stark continues his march against Tywin Lannister and scores several victories before Lannister heads south to join in the defense of King’s Landing.

Young Arya Stark continues to move north with a caravan of brigands and thieves on their way to serve on The Wall. Eventually, the group is cornered within an abandoned keep by Lannister troops and their leader is killed. Arya and several others escape, only to be captured later. Arya, who’s been posing as a boy to hide her identity is forced to reveal her gender. She poses as a serving girl and is pressed into servitude under the Lannisters at Harrenhal.

While serving and biding her time, Arya is offered the services of a mysterious man at arms whom she helped avoid death in the battle where she was captured. Jaqen H’Ghar offers t o kill three people of her choice, no questions asked. Arya has plenty of hate to go around, but chooses her targets wisely. She offs two Lannister men who have abused her and her friends. She picks as her third target H’Ghar himself. Not wanting to commit suicide, H’Ghar is willing to make a deal with her. She uses him to help gain the release of several of Stark’s men who repel the Lannisters and take Harrenhal.

The debt paid, H’Ghar departs. Before leaving, he gives her an iron coin and tells her it will aid her someday and to hang onto it. Arya stays at Harrenhal for awhile, maintaining her disguise, but eventually escapes into the wilderness.

Far north of Winterfell, beyond the Wall, Jon Snow has joined a scouting party of Night’s Watch to search for wildlings and the renegade wildling leader, Mance Rayder. They find most of the villages on the old maps dead and deserted. They do find the keep of Craster’s Keep still under the leadership of Craster, a vile man given to wedding his daughters, but friendly to the Night’s Watch. The group spends the night there.

Snow and another man are sent as an advanced scout on Rayder’s believed position. They encounter a group of wildlings. Snow and Jeor Mormont ambush a camp and Snow takes a hostage. He interrogates her and is ordered to kill her. But Jon can’t bring himself to kill a woman in cold blood and lets her go.

Soon, however it is apparent that they are being pursued and outnumbered. Jon is ordered to act as a traitor to gain information on Mance Rayder’s plans. Jon plays the part, even going so far as to kill his commander with the aid of his dire wolf. Snow is brought into the fold where he learns that Mance Rayder is advancing south toward the wall with thousands of troops.

In the east, Daenerys Targaryen has led her people through the desert to the trading town of Qarth. Her three baby dragons have hatched and enchant the people of Qarth. They want her to stay among them. They also want her dragons. She tries to secure passage back to Westeros to claim her throne, but all of the traders want her one of dragons in exchange.

To demonstrate to Daenerys how precarious her situation is, the leaders of Qarth invite her to enter the mystical House of the Undying. There, she will be shown possible pasts and futures of her life. She is guided to always turn right. She enters and finds that it is not always possible to turn right through the corridors. She sees different images that confuse her. One of the dragons sets fire to the house and it burns.

Daenerys and her retinue go to the docks determined to secure a ship. An assassination is attempted and Daenerys is rescued by two men whom she has not met before. Strong Belwas and Arstan Whitebeard are agents of her father’s ally, Illyrio Mopotas. They have come to take her back to Westeros to reclaim her throne. Her story ends with her preparing to leave.

The book climaxes with the battle for King’s Landing between the armies of Stannis Baratheon and the Lannisters. Tyrion has taken control of the greycloak troops that represent the Lannisters and has implemented a plan to thwart Stannis’ plan to enter the city via ship up the river. After the ships have entered the river, full of troops, a chain is raised across the river behind them. Then the magic, flammable elixir he’s had the maesters working so hard to concoct is dumped from the walls into the water and onto the ships. The ships burn. Their troops jump into burning water and are incinerated. Tyrion is badly injured in the battle.

The day is saved because Tywin Lannister has moved south from his skirmishes with Robb Stark to assist in the defense of King’s Landing. Tywin’s troops defeat Stannis’ forces on the ground and Stannis is killed. Tyrion, badly injured, starts his recovery under the watchful eye of his sister.

So ends the second installment of a Song of Ice and Fire.

This book read very much like an installment in a story rather than a stand alone book. Many events were related to the reader, such as Robb Stark's several defeats of Tywin Lannister’s army, but not told in the text. Most of this book was about planning and positioning and plotting. The first battle has been fought and two contestants – the Baratheon brothers – have been eliminated. With Daenerys Targaryen on her way back to the mainland and Mance Rayder leading an army of barbarians from the now unprotected north, the fight for control of Westeros will continue.

We saw the introduction of a few of the more traditional elements of fantasy in the second installment. The dragons have been born and are growing. They will certainly be a factor in coming events. We saw the super human being with god like powers help Arya and provide her with what is certainly a magic coin that will help her find her way to safety and perhaps her family. We also saw the introduction of the maesters preparing potions to assist in battle. The story has evolved from a Medieval game of chess on a continent into something more fantastical. I hope these developments continue.

The book was more than 800 pages long. The stories it tells are expansive and characters are developed well. Especially well developed are Arya and Tyrion. Arya is the person everybody is rooting for. Well raised and a genuinely nice little girl, the reader wants to see her beat the odds and find her family, even knowing that that reunion will be sad.

Tyrion Lannister the reader is still unsure about. We know that he is an underdog and perhaps an anti-hero. His family loathes him because of his size and intelligence. But, the reader witnessed no true skullduggery against his inept nephew as Tyrion took control of leadership of the city. In taking control, Tyrion acted, at times, as a humanitarian to try to feed people to keep them from hating the Lannisters. His love for his prostitute seems genuine. While he loathes his sister, he has not plotted to supplant her either. Of all the characters in Martin’s story so far, Tyrion Lannister is the most interesting and most complex.

The reader may learn about those events in the north where Robb Stark defeated Tywin Lannister. The introduction to book three, A Storm of Swords, says that some of what is related in that book took place simultaneous to events in A Clash of Kings. Martin apparently has a lot of story left to tell.

The book was an easy, enjoyable read. It was not as exciting and interesting as the first book where the reader was first getting to know the characters and learn the lay of the land of Westeros, but Martin moved his story forward in an interesting way and kept the character development going. That’s all you can ask of an author in such a expansive, multi-volume story.

Labels: A Clash of Kings, A Song of Ice and Fire, George R.R. Martin