Hakiem the storyteller is sitting in the Vulgar Unicorn lamenting the failing fortunes of his city. Sanctuary – never a town of booming “legitimate” commerce – is now on hard times. Hard times lead desperate people to desperate acts and Hakiem fears that Sanctuary’s already dangerous streets and alleys will become more dangerous. He is stunned from his revelry when in walks One Thumb, the inn’s proprietor thought by all to be dead. One Thumb tells his story to Hakiem who is an expert at stories. He finds One Thumb’s story to be second rate and not worth retelling for profit. 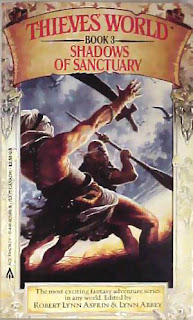 One Thumb was the character introduced and killed by author, Joe Haldeman, in the first book of the series. The way Asprin writes Hakiem’s evaluation of One Thumb’s story, it is entirely clear that Asprin didn’t care for Haldeman’s story or the elimination of a potentially interesting character. One reviewer called it “bitchy and funny.” I agree.

Looking for Satan by Vonda McIntyre
Four travelers unfamiliar with Sanctuary and its customs (or the customs of normal humans) arrive in the town looking for their missing friend, Satan – a red, winged humanoid. Through the help of the mage, Lythande, they learn that he was captured and is being held as a freak show exhibit at a carnival. They scheme to get him released and exact a little revenge on one of the Vulgar Unicorn’s more vulgar patrons who tried to rape one of them.

Other Thieves' World fans seem to hold this story in low regard. One called it, “too touchy, feely.” I think it’s the best Thieves’ World story yet. McIntire writes her fish out of water characters brilliantly – eschewing laugh lines and incorporating genuine cultural gaps that are interesting and thoughtful. She also tastefully and artfully injects sex into her story – something other Thieves’ World writers have been a little ham handed at doing.

Ischade by C.J. Cherryh
A new thief has arrived in Sanctuary and she specializes in ripping off mages. Coupling with her means death for her mate. She hires a local thief to assist her in her efforts. The mage, Lythande, hires the thief Hanse to protect his/her interests. The two play a cat and mouse game through the Maze and the temples of Sanctuary.

All I can say of this story is it was incredibly dull. The motivations of the principles were difficult to discern. Ischande was an intriguing character because of her Black Widow nature, but the story was sorely lacking.

A Gift in Parting by Robert Asprin
A young man is eager to blow out of Sanctuary and his boring life as the son of a fisherman. He’s counting on his father, to whom he is not close, to provide him with a little coin before he heads to the capital. The father promises him his coin and a life lesson. All of the fishermen in Sanctuary are going broke because some creature has invaded the fishing waters and scared off the fish. The old fisherman teaches the young man a couple things about making things happen rather than waiting for things to happen.

Of the stories I’ve read in the Thieves’ World series, I think I like this one best. I now put it above In Search of Satan. It need not have been set in Sanctuary. It needed no fantastical element. It was, at its core, a well conceived, well told short story with well developed characters. That’s all one can ask for in a story.

The Vivisectionist by Andrew Offut
Hanse the thief is called upon, once again, to aid the prince, using his thieving skills. The prince’s most elite of his elite Hell Hound guards has gone missing. Hanse will be richly rewarded for finding him. Hanse locates him, imprisoned in a ghastly chamber of horrors operated by a madman who delights in inflicting pain in the name of medical research.

This story was well conceived, but poorly written. Inasmuch as the A Gift in Parting was the finest of the Thieves’ World tales to date, The Vivisectionist was by far the worst. That’s too bad because Offut tried to introduce an element of horror into this fantasy anthology. The writing is just horrible. The first ten pages had no connection to the story. Offut simply stopped that story and started over. The prose is awkward and stilted. The dialogue is stilted and the narrative hard to follow. What a waste!

The Rhinoceros and the Unicorn by Diana L. Paxson
A struggling, middle-aged artist reflects on the failures of his life. Lalo’s once promising career never took off. His once beautiful wife has aged and gone lumpy. He lives in a small apartment with his wife and kids in one of the worst parts of Sanctuary. One evening, he is in the Vulgar Unicorn and the wizard Enas Yorl invites him to paint his portrait. It is difficult since the wizard’s cursed body constantly changes form. In payment, Yorl offers him the ability to paint the souls of people rather than their appearance. He is invited with other artists to submit work to be displayed in a new temple. Lalo finds beautiful women to serve as models, but they are whores, cutpurses, and deviants and their souls transfer to his canvas as ugly. Scared and desperate, he searches in vain for a beautiful woman with a beautiful soul and cannot find one. He finally decides he will use his wife as a model. In painting her, he finds out what a beautiful soul she is. That inner beauty, revealed on canvas, is the hit of the show and Lalo finally realizes his life’s dream to be a successful artist.

This story had just touches of femininity to it that provided an interesting perspective on inner beauty versus glamour. Paxson develops a rich subtext and combines it with a clever, well paced plot to write a wonderfully enjoyable story.

Then Azyuna Danced by Lynn Abbey
A slave girl, Seylalha, is chosen to represent the sister of the god, Vashanka, at the Festival of Vahsanka. Once she has finished her ritual dance, she will mate with the man picked to portray Vashanka for the legend says that Vashanka bedded his sister to produce an heir. The local priest wants Prince Kadakathis to portray Vashanka. Kadakathis agrees, but knows, as royalty, it cannot be commonly known that he slept with a common slave girl. So, Tempus Thales is asked by the Prince to step in and fulfill his role. Seylalha dances her dance and she and Tempus copulate. She knows that if she is with child, she will be free and live a life of leisure as a resident of the temple of Vashanka. She is left hoping.

This story left me thinking, so what? Perhaps it was written as a character development piece for Tempus Thales. We do learn more about his background as a disciple of Vashanka. But as a stand alone story, the plot had no purpose.

A Man and his God by Janet Morris
Tempus has survived his imprisonment with the vivisectionist, has participated in the ancient rituals of his god, and is now ready to return to the fold. His old friends come to Sanctuary to help him mete out justice to his tormenter and his constant adversary, the slaver, Jabu.

This story ranks in the top ten worst stories I’ve ever read! I didn’t even finish it it was so bad and I can’t recall the last time I gave up on a story! There was absolutely no coherence in the plot. The words just marched across the page in search of a plot! If the next book contains a story this bad, I will not finish the series.

Essay: Things the Editor Never Told Me Author: Lynn Abbey
Author Lynn Abbey discusses how difficult it has been to maintain the momentum of the Thieves’ World series.

Shadows of Sanctuary contained the finest writing of the first three volumes of the Thieves World series. It also contained the two worst stories of the collection. Poor writing coupled with little or no editing took what could have been an outstanding collection of short stories and made it average.

One cannot help but notice the stature of the writers selected for the volumes declining. The likes of Mercedes Lackey, Theodore Sturgeon and Joe Haldeman have given way to the likes of Robert Asprin, Lynn Abbey, and the hapless Janet Morris.

Posted by Brian Schwartz at 9:42 AM