On Writing By Stephen King

On Writing
By Stephen King
Copyright 2000

The master of the craft of writing popular fiction writes a non-fiction “how-to” book that should be on every writer’s shelf. The book provides inspiration, instruction, and reinforcement to any person who’s ever had the desire to tell a story in writing. 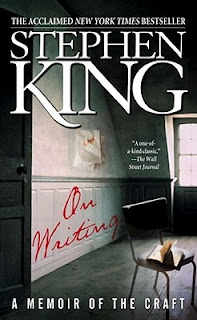 The book opens with an autobiographical section. King seems to have little recollection of his childhood except for pain. He does discuss at length his frequent ear infections as a child and the painful process of having them drained. King’s small family – his father having abandoned him, his mother and brother when he was two years old – was nomadic, moving from Maine to Wisconsin and back to various parts of Maine through his childhood.

King wrote quite a bit as a child and as a teenager. He and his brother, Dave, published a newsletter called Dave’s Rag to which young Stephen submitted short stories. He worked as a sports reporter at a small Maine newspaper where he learned that essential lesson taught by Strunk and White, “Remove all unnecessary words.” A valuable lesson for any writer.

He learned that writing could be subversive when editing his high school newspaper. King confesses he was not an enthusiastic editor. But when he and his buddies cooked up a spoof newspaper called The Village Vomit, he got enthused and got in trouble. The newspaper made up funny stories about the high school faculty, calling them by their nicknames. The school administration was not amused.

King was inspired to publish, not by some great, inspiring work of fiction, but by a bad one written by an otherwise decent writer. Murray Leinster’s Asteroid Miners, King says, was an atrocious story laden with silly adverbs and poorly written. (King admonishes all aspiring writers to avoid using adverbs). He thought, if that story can get published, my stories can get published.

His first published story was I Was a Teenage Graverobber. From there, he’d go on to publish hundreds of pieces of short fiction.

He discusses going to college and meeting the love of his life, Tabitha Spruce King. The story of the early years of the King marriage is one he’s told a few times before. They were poor, barely getting by, with a few young mouths to feed. King worked in a laundry and as a school teacher. Tabitha worked at a Dunkin Donuts and they lived in a crappy little mobile home that sat up on a hill. In the evenings, King wrote in the small laundry room, balancing a desk and typewriter on his lap. In that little room, several King novels were born.

The most famous of those early novels was Carrie. The story of the manuscript that became Carrie is another oft told tale in King lore. He got frustrated with the novel and threw it in the trash. Tabitha saw it there and rescued it. She read it and thought it had potential. He slogged on with Tabitha helping him with the psychology of adolescent girls. Carrie White was an amalgamation of a girl he knew growing up and a girl he taught. Both were pitiful and the subject of ridicule and cruelty.

King sold Carrie for an advance of $5,000 which was a small fortune for the struggling King family. Later, the paperback rights were sold for $400,000 and King became a full time writer.

In this autobiographical section, King discusses, for the first time in depth, his problem with drugs and alcohol. He’d been a beer drinker since high school. Later, he picked up a cocaine habit and abused Xanax and other pills as well. He says he frequently wrote with toilet paper in his nose to staunch the bleeding from the cocaine use and was so heavily sedated during the writing of Cujo he has no memory of it. While he discusses his problem and the intervention Tabitha staged for him, he does not discuss his treatment for his addiction. All we know is that he’s clean today.

King moves on from his short autobiography into a section on how to write. He discusses tools in a writer’s toolbox such as vocabulary and grammar. He says one must have a place to write where he will not be disturbed. Most importantly, a writer must write, daily and read daily. A writer who does not read is not going to have the tools to write.

He talks about plotting and how he avoids it. He lets the story tell itself, equating it to an archeologist unearthing an already existing. The story already exists. The writer must bring it out. He says he plotted two novels – Rose Madder and Isnomnia – and admits that neither book is very good.

He really gets into the nuts and bolts of writing by admonishing writers to strike adverbs on rewrites. He constantly refers to Strunk and White and their admonition to strike all unnecessary words. He even provides a sample exercise with the opening section of the short story, 1408. He lets the reader read the unvarnished first draft. From there, we see his proofreading marks and he explains the explanation for each change.

He discusses audiences and editors. Every writer must write for an audience. His audience is Tabitha. It is she that he wants to impress and please. Every writer needs that person. Tabitha is unrelenting in her criticism as well as her encouragement. One has to believe that we would not know Stephen King were it not for Tabitha because King says, she’s always right in her criticisms. She certainly was in the case of Carrie.

After a thorough and informative course on how to write fiction from someone who does it better than most, King goes on to tell the story of how his career and his life were nearly taken from him in a tragic and scary accident in 1999.

Most people know the story. King was hit by an SUV while walking along a country road near his home. King tells the tale in excruciating detail, providing graphic descriptions of his injuries which were severe. The lower half of his body was mangled badly and his head was gashed badly. He had many surgeries to put his body back together and endured grueling physical therapy to rebuild his body.

The accident also hampered his writing. On Writing was the book he’d nearly completed when the accident happened. Sitting was an ordeal for him, causing him great pain. But he was determined to pick up the project and press forward. The words came excruciatingly slow and he feared that perhaps he would no longer be able to write. But, with Tabitha’s encouragement, he kept at it and managed to deliver On Writing to his publisher.

He winds up with a list of suggested books. He says they are books he’s read over the last couple years and that they inspired him, made him think, or just provided enjoyment.

Anybody who writes or wants to write should own this book and have it thoroughly highlighted. The autobiography is inspirational. Stephen King made it because he wrote and wrote daily. He inspires others with his writing to undertake the craft.

The how-to section is as instructive as any textbook. King says that some people just can’t write and no amount of training is going to make them writers. He adds that there are many people who have it in them to write and write well if they’ll practice the craft and dedicate themselves to it. The nuts and bolts advice are lessons King has learned from publishing more than 50 books and more than 100 short stories over the years. If you’re going to take advice, you should take it from someone who learned it the hard way and became successful.

On Writing is King’s finest non-fiction effort and one of his finest books in his body of work. I would challenge any person that practices the craft of writing at any level to read it and not be inspired, to not have learned something new about the craft, and not be thoroughly impressed with King’s awareness of how he does what he does.

On Writing and Strunk and White’s Elements of Style are two essential books for any writer.