Introduction by Robert Asprin
Hakiem the Storyteller relates to several Sanctuary youths the tale of how he was at the beach watching as the Beysib – an amphibious humanoid race came ashore. Sanctuary is now full of the foreign creatures who have brought commerce and wealth to the city. But beneath the booming economy lurks uncertainty of war. 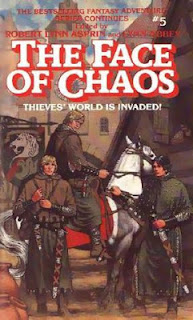 High Moon by Janet Morris
Under a full moon, two Stepsons hunt the witch Roxanne, but are diverted when they learn that some teenagers have wondered into one of the worst parts of Sanctuary. Their pursuit of the teens leads them right to Roxanne and they are captured.

I might be able to give a more complete plot summary if I’d actually have finished the story. However, as it has been with most of Morris’s writing in this series, I’ve found the story too atrociously written to read! It goes on and on, seemingly without purpose or development. It’s entirely too long and covers too much ground and none of it well.

Necromant by C.J. Cherryh
The witch Ishande is at it again. While a militant group called the Beggars kills the feuding Hellhounds and Hawkmasks with equal hatred, Ishande manipulates her involuntary followers into expanding her powers in Downwind.

Another tepid entry by Cherryh that was hard to follow. Perhaps Cherryh’s works suffer so because they follow Morris’. Some of the action in this story was apparently connected to Morris’ horrible story that I could not finish.

Art of the Alliance by Robert Asprin
With the Beysibs mounting a strong presence in Sanctuary, the native Stepsons and Hawkmasks – once bitter enemies – have formed an alliance. But the Stepsons -- the promoters of law and order in Sanctuary are a shadow of their former selves. The real Stepsons have gone north to fight a war. Behind, they have left a group of incompetents who are incapable of fighting. Saliman, right hand man to Jubal, the slaver who runs the Hawkmasks, hopes to use this alliance and “help” to the Stepsons as a means of discrediting them.

It’s becoming clear that Asprin himself is the only person who understands his vision for this series of books. This story is well told with a clear narrative and clear character motivation. It relates directly to the central theme of this book, which is the presence of the Beysibs in Sanctuary and how the population of Sanctuary is reacting to them.

The Corners of Memory by Lynn Abbey
The Beysibs have installed their own government and Prince Kadakathis is a reduced authority in Sanctuary. Someone is assassinating Beysib soldiers in the night. The Beysibs are responding by rounding up residents of Sanctuary and executing them. Meanwhile, someone is also killing Hawkmasks. Cythen, the only female member of the Hawkmasks is directed to an elite group of Beysib assassins who use snake venom to kill. Cythen learns that the assassins were not responsible and that perhaps just one person is responsible for all the murders.

Earlier, I said Asprin was the only person left writing for this short story compilation that still understood its vision. Add Abbey to that equation as this story demonstrates that she, too understands Sanctuary and its characters. She also knows how to write a short story with a strong main character, a riveting plot that contains twists and turns, and a satisfying resolution. Best story in the book.

Votary by David Drake
Samlore Hil Samt returns to Sanctuary to find his niece, Star who was born to his late sister four years prior and put up for adoption. She has disappeared into Sanctuary’s underbelly. After contacting Cappa Varen and the Hawkmasks, he is able to track her to a Beysib cult who is holding her near the waterfront. He sneaks into the cult’s hidden lair inside a cave and rescues her. However, as they are about to escape, their route is cut off. That’s when young Star shows she has some special powers over creatures of the deep.

When I first started the Thieves World series, this is the type of story I was hoping to get over and over again. We learned about Samlore’s ill fated sister in an earlier volume. This is a worthy follow up to that storyline.

Mirror Image by Diana L. Paxson
Lalo the artist paints not what he sees, but what is inside his person so his art reflects the character of the person being painted. This ability has helped him rise above poverty to a better station in life. One day, he decides to look into a mirror and do a self portrait. As he works, he finds himself transported into the world of the gods where he asked to paint a portrait. Meanwhile, his loyal and dutiful wife pulls out all the stops to bring him back.

Lalo is the most interesting of all of the characters in Thieves’ World and his stories are always interesting. Paxson doesn’t do much to develop Lalo more, but spins an interesting and well written yarn that closes the book nicely.

This series really lost focus at this point. Abbey, Asprin, Drake, and Paxson keep their stories focused on the assigned scenario of each book – in this case the occupation of the Beysib. But Morris and Cherryh seem to be clueless about Sanctuary or just didn’t care about the guidelines. Their stories were poorly written, bore little upon the premise, and dragged down the book, making it difficult to read and the worst installment in the series to date.

Posted by Brian Schwartz at 1:40 AM