Book to Movie: Thinner (1996)
Director: Tom Holland
Screenplay by Michael McDowell and Tom Holland
Based on the novel, Thinner by Stephen King (writing as Richard Bachman)

Thinner was the second of Richard Bachman’s books to be made into a movie – the first being The Running Man. Thinner was a better movie than The Running Man, but still was not a particularly good movie. Of course, the source material wasn’t that good either. In many ways, this average movie improved upon the novel. 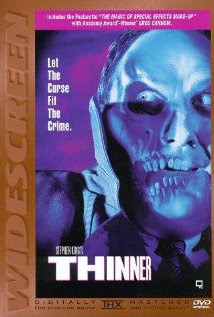 The book opens after Billy Halleck (Robert John Burke) has faced a judge and cleared of all charges in relation to the death of the old gypsy woman. The movie opens prior to the accident. We establish that Billy Halleck eats too much and his wife is on him about it. We also establish that gypsies are in town and, while Billy Halleck could care less about the gypsies, his buddies the town judge and town police chief are mighty angry.

From there, the movie very closely follows the book until the end. Unlike many King adaptations, they went with what King wrote rather than retool the ending for movie audiences.

The movie was not bad in its execution. The script was solid. The acting (other than Burke in a fat suit just wasn’t convincing as a fat man) was par. The special effects were solid and not overdone. It was just not a particularly exciting or scary movie.

The movie was different in its treatment of the deteriorating relationship between Halleck and his wife. This is thrown out there by King a few times in the book, but he never really develops it into a cold, deep hatred that would inspire a man to kill his wife in a horrific manner to save himself. The film develops that cold hatred by having Billy conjure an affair between Heidi and the doctor. Again, this was mentioned in the book, but not developed.

Give credit to Holland and the makeup department for making Taduz Lemke (Michael Constantine) as ugly and bitter as he was in the novel. If there was anything that lent this novel a major creep factor, it was Lemke’s appearance.

Thinner is an average movie based on an average novel. Neither really deliver any major thrills or creepiness. While there is nothing so bad in the movie to make a viewer groan, there is little there to excite him either.