Book to Movie: The Thing (1982)
Screenplay by Bill Lancaster
Directed by John Carpenter
Based on the novella Who Goes There by John W. Campbell

In 1982, John Carpenter and Bill Lancaster made a second adaptation of John W. Campbell’s classic novella of doppelgangery and paranoia. In their take on the classic, they dispensed with the opening scenes and got right down to the nitty gritty of the action. 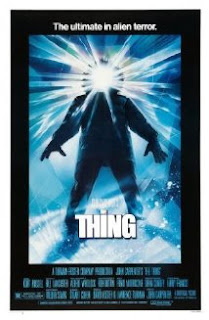 The opening scene has a Siberian husky running across a frozen tundra, pursued by a helicopter. A passenger in the helicopter is taking shots at the dog. The viewer is immediately taken in by this bizarre scene of men so determined to kill one dog. It is one of the most powerful openings to a movie in Hollywood history.

Eventually, the helicopter lands near an American scientific station in Antarctica and the men continue to pursue it. The helicopter explodes when a grenade lands near it, but the lone gunman pursues his quarry. The dog runs to the Americans on the base like a bullied kid runs to a teacher. The Norwegian pursuing the dog tries desperately to tell the Americans why he is pursuing the dog. Finally, to get at the dog, he shoots one of the scientists. Another American takes him out with a shot to the head. The dog is placed in the kennel with the American dogs.

Perplexed as to why the Norwegian was pursuing the dog, the Americans travel to the Norwegian camp. There, they find everyone dead. They also find a block of ice that once had something shaped remotely like a humanoid inside it and a dead creature nearby. They take the creature back to their camp.

A necropsy is performed and the doctor informs them that the creature was transforming itself into a human when it was killed. The Americans put the pieces together. About that time, the dogs go crazy and they find the creature has tried to absorb one of the dogs. The party leader McReady (played by Kurt Russell) kills all the dogs. He also suspects that some of his fellow scientists may have been compromised.

The doctor goes crazy, just as he did in the Campbell novella and is locked in a remote shed. A few of the scientists are revealed to be aliens and are killed.

Paranoia reigns as everybody suspects everybody else of being an alien. Nobody wants to be alone with another person. McReady decides to tie up those he suspects may be infected. Two men searching one of the buildings finds one of McReady’s shirts torn open and a member of the crew burned to a crisp. The crew turns on McReady. He gathers dynamite and threatens to blow up the camp if anyone acts against him. He then has the men tied up and prepares to administer a test of their blood, just like in the novella.

McReady tests his own blood first to show the men he’s not one of the creatures. He then, one by one, takes blood from the men and tests it. The last man tested is an alien and tries to break loose. McReady and another member of the crew kill him.

They go out to the shed to test the doctor. There, they find that he’s tunneled out of the shed and been scavenging equipment. In a cavern under the shed, they find a partially assembled spaceship. The doctor is gone.

McReady decides to blow up the camp. As he is preparing to detonate the explosives, another creature appears and destroys the detonator. McReady triggers the explosives with a stick of dynamite and the base is destroyed, along with the creature that was crewman Blair.

As the base burns around him, McReady is approached by a man named Blair who is the only other survivor. Each man suspects that the other is a creature. They surmise that the doctor is in hibernation, awaiting the arrival of the spring replacements. With the camp burning around them and no hope of survival in the harsh elements, McReady and Blair put aside their distrust and share a bottle of scotch as they await death.

The Thing is superior to The Thing from Another World in building suspense and paranoia and far surpasses the source story in the same way. Carpenter and Lancaster weave a tense, taut, thriller that has the perfect balance of action, slow suspense, and mounting horror. The special effects were superb and rival today’s computer generated material.

Carpenter was true to Campbell’s notion of paranoia while leaving out much of what was not exciting in the novella. The discovery of the ship is shown when the Americans watch an 8mm film of the event taken by the Norwegians, but it is brief and does just enough to advance the story. The best part of the story was the creature(s) that Carpenter and his effects people constructed very much as Campbell described them.

The Thing is held in exceptionally high esteem by fans of science fiction and horror and rightfully so. It is a nearly flawless movie. The cast is stellar with Russell, Wilford Brimley, Richard Dysart, and Richard Masur leading the way. The effects were the best of their day. The script was well developed and the entire movie directed by a master of horror and suspense.

It is rare for a movie to be better than the book. Kudos to John W. Campbell for inventing the source material. But John Carpenter told a superior story in his movie.

Posted by Brian Schwartz at 7:39 PM

Labels: The Thing, Who Goes There? John W. Campbell