Book to Movie: Misery (1990)
Screenplay by William Goldman
Directed by Rob Reiner
Based on the novel Misery by Stephen King

When reading Stephen King’s 1987 suspense thriller, Misery, one can’t help but think this is a book ready made for screen treatment. Strong characters, a suspenseful plot, and a claustrophobic setting are the ingredients for good suspense thrillers. 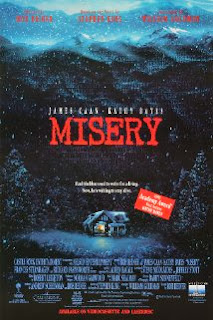 Of course, you have to have a good screenwriter, a good director, and the right cast. The movie Misery had all three and the result was a superb movie that equaled the book.

The movie doesn’t deviate from King’s basic narrative of the writer trapped in a home by his insane “number one fan.” But to keep it from being a two person show with Annie Wilkes (Kathy Bates) and Paul Sheldon (James Caan), the writer and director had to open it up a little bit with new characters and outside action.

Created for the movie was a local sheriff known as Buster (Richard Farnsworth) and his wisecracking wife and deputy, Virginia (Frances Sternhagen). Although they enjoyed relatively little screen time in contrast with Bates and Caan, the chemistry between between Farnsworth and Sternhagen was nearly as strong and served as a little bit of light comic relief between the tense scenes played out in Annie Wilkes’ spare bedroom.

Scenes were added as Sheriff Buster led a search for the missing author that eventually led him to the Bates farm.

Bates was the absolute perfect choice to play Wilkes and the movie launched her career. Her performance of Annie’s “up” moods was a little more understated than King wrote them. That only served to make her maniacal behavior stand in starker contrast. Physically, Bates was everything King envisioned in the character.

Caan played Paul Sheldon as if he’d read the novel several times and was an authority on it. Caan played the role just as King wrote it. Bates and Caan had a wonderful chemistry that created tension masterfully.

Interestingly, little of King’s actual dialogue made the movie script. Some of Annie’s peculiar expressions like “oogie” made the script. But Goldman chose to construct his own dialogue and it worked wonderfully for the actors.

There were a few changes to the story that made it stronger for the big screen. Annie lets her pig, Misery, into Paul’s bedroom for a visit. Paul decides to wean himself from narcotics whilst living with Annie. The most striking difference was Annie’s “hobbling” of Paul. In the novel, it is a tense moment, but not the most tense in the book. In the movie, this was the defining moment. Instead of chopping off one of Paul’s feet as she did in the book, she uses a sledgehammer to break both his legs. It was a fantastic scene that worked so much better than had they stuck with the book.

Ultimately, it’s Sheriff Buster who investigates the Wilkes farm and gets shot and killed for his troubles. This sets up the final scene where Paul burns the Misery novel and touches off the final conflict between himself and Annie.

The final scenes are different than the book, but again, work better on the screen. Paul is having lunch with his agent when she asks him about a non-fiction book recounting his experiences on the Wilkes farm. As they are discussing this, he sees Annie Wilkes wheeling a desert tray in his direction. Terrified, he looks away. He looks up again to see a non-descript waitress standing at the desert tray. The waitress recognizes him and tells him she’s his number one fan.

Misery ranks in the top five adaptations of King’s work on the screen. This is because the book lent itself so well to screen treatment. Secondly, Rob Reiner knows how to get the most out of King material, having directed the brilliant Stand By Me. Thirdly, the movie was cast perfectly.

It’s hard to find a flaw in this adaptation. It had no weak moments, no throwaway scenes, no gratuitous gore or action. Every scene built upon the prior and it had a wonderful climax and a subdued, but creepy ending. Misery is a great movie on every level that can be enjoyed by fans of King’s work and movie fans in general.

Posted by Brian Schwartz at 2:41 PM