Cell: A Novel By Stephen King

In 2006, Stephen King returned to the genre that made him famous. After completing the Dark Tower series and penning the soft crime novel, Colorado Kid, King wrote a genuine horror novel. 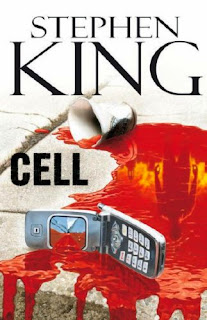 In a career spanning forty years, it seemed that King had touched on every aspect of horror. But he’d never written a zombie novel. Tipping his cap to Richard Matheson and George Romero, King wrote a zombie novel that added some new elements to the zombie genre.

Clayton Riddell is an author and artist who produces graphic novels. He is in Boston when the world goes crazy. People start savagely attacking one another, buildings explode, and police are no help.

Riddell finds shelter in a store and meets a man who also seems normal. Tom McCourt lives in a nearby town and they decide to head there. As they exit the building in that evening, they notice that the mayhem has stopped.

They are able to figure out that whatever happened to the people who went crazy, it was caused by their cell phones. Neither Clayton or Tom owned cell phones.

As they make their way to Tom’s suburban home, Clayton obsesses over the fate of his son and estranged wife who are at home in Maine. He makes it his goal to get there to find out what happened.

Along the way, they pick up a pre-teen girl, Alice Maxwell who is in a state of semi shock. They finally arrive at Tom’s home and spend the night in comfort. The next day, they see the zombies, converted by their cell phones, are wandering the streets and are starting to band together, moving in the same general direction.

After a couple days at Tom’s house, the group decides to leave and head for Maine to find Clayton’s family. They leave at night and procure weapons from a neighbor’s house. They head north.

They eventually find a private school where two survivors are there to greet them. The school’s acting headmaster and a young student, Jordan. Jordan is a computer geek who has developed a theory as two what caused the calamity and what was occurring now.

The pair show them the school’s stadium during the day. Tom, Alice, and Clayton see a stadium packed with zombies who are sleeping and are not disturbed by their presence. Around them, boom boxes play soft rock music.

That night, their dreams are haunted by a zombie dressed in a red Harvard hoodie, leading a pack of zombies that surround the house. It seems that the Harvard zombie, whom they dub The Raggedy Man and The President of Harvard is giving them free passage to a cell free area in Maine.

Confused as to why they are offered freedom to leave, they decide to get out of New Hampshire and head for the cell-free zone in the TR90 in Maine. Along the way, they find that they are pariahs among the other normal people who have been warned in dreams to stay away from the group.

They encounter another group of people who wiped out a group of zombies in New Hampshire and have found themselves as outcasts. They join forces and head for the TR90.

Along the way, Alice is killed by a reckless driver. Eventually, they arrive at the fairgrounds in a bus they find along the way. They are taken prisoners by the zombies and locked in a casino. The group notices that the zombies, who once marched together so orderly and went to bed at dusk, are starting to act erratically. Jordan theorizes that their programming is breaking down.

directions. But Clayton is determined to find his son. He eventually locates him sitting on a curb. He is a zombie, but not vicious or dangerous. Theorizing that his son must have received a corrupted pulse, Clayton decides to care for his son.

After many days of trying to reach his son, there is no improvement. Clayton decides on a desperate act. He decides to administer another pulse to his son, hoping to restore his son’s psyche with the same device that destroyed it. The book ends with him holding the phone to his son’s ear.

Reading this book was like meeting an old friend who’d been gone from my life for several years. After nearly a decade of writing feminist books, fantasy books, crime books, and science fiction, the King of horror returned to the genre where he reigned supreme and showed that he still ruled.

Zombie books, movies, and television shows are all the rage now. In some, the zombies move fast. In others, they are shambling and mindless. This is the way it has always been. King dared challenge that trope and made the zombies intelligent and purposeful. The undead are always associated with the night. King brings them out into the day. King takes the entire zombie genre and turns it on its head and the result was the best zombie novel I’ve ever read.

Another factor that makes this novel so satisfying is what King chose not to write. In Under the Domei>, King took more than a thousand pages to explain the phenomena that trapped the people of Chesters Mill. The end and the solution were horribly unsatisfying and hurt the novel badly. In Cell, King never tells us the source of the Pulse. He never explains it except through the theory developed by an 11 year old boy. Not knowing the nature or source of the Pulse made the book better by making the plot and movement much more streamline.

Then there is the ambiguity of the ending. It reminded me very much of the ending of Pet Semetary. We don’t know exactly what happens next, but we have an idea it’s not going to be good. At the end of Cell, the reader is left to use his imagination.

The book has one minor weakness and it is usually a strength of Stephen King. He leaves some characters underdeveloped. More backstory on the other group of “untouchables” would have given a little more depth to the story’s climax. There’s enough to make the story work, but there could have been more.

Cell has been made into a movie to be released this year starring John Cusack and Samuel L. Jackson who paired up in the movie 1408. It is to be released in 2015.

Cell ranks as one of King’s better books. Fans have mixed feelings about it. They either love it or hate it. Those who love Stephen King’s horror are the former. I am one of them.

Posted by Brian Schwartz at 6:21 PM