Book to Movie: 1408 (2007)
Screenplay by Matt Greenburg, Scott Alexander, and Larry Karaszewski
Directed by Mikael Hafstrom
Based on the short story, 1408 by Stephen King from the collection Everything’s Eventual:14 Dark Tales

1408 is the first serious film based on a Stephen King work to be made in many years. Much dreck has been churned out by Hollywood looking to make a buck on King’s name. 1408 is not dreck. It is a tense, frightening, and chilling translation of King’s work to the big screen that is worthy of being mentioned with the likes of Carrie or Christine.

Mike Enslin is a writer who travels around the country debunking haunting. He stays in haunted houses, haunted cemeteries, and haunted hotels, reporting on his findings and rating them on how creepy they really are. He has never seen a ghost. 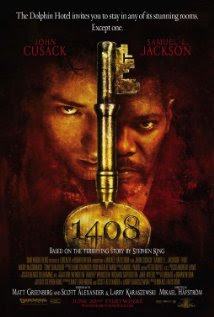 He learns of a New York hotel called The Dolphin and its room 1408 which is reputed not to be haunted, but to be evil. Twenty-two people have killed themselves in the room and there have been many natural deaths as well. He calls and finds out that the room is permanently unavailable.

Enslin’s agent calls and assures him that he will be allowed to stay in 1408. New York discrimination laws dictate that if a room is available and is requested, it must be provided. The viewer is provided with some foreshadowing as his agent asks him if he really wants to come back to New York. Apparently some tragic events occurred there for Enslin. Enslin says he’s ok with it.

This is all backstory installed by the screenwriters to set up the story. King’s story begins with Enslin’s arrival at the Dolphin.

That scene plays out on screen much as it was written. The manager of the Dolphin, played by Samuel L. Jackson, tries in every way to dissuade Enslin from taking 1408. He tells him of the horrific deaths. Enslin has already done his homework. The manager says not all of the unpleasantness of 1408 has been reported and that a made once gouged out her own eyes in the bathroom. The skeptical Enslin doesn’t care. The manager gives Mike the file to ponder and a bottle of fine cognac along with a room key – a mechanical key. Electronics don’t work very well in 1408. The manager tells Enslin that nobody has lasted more than one hour in 1408 before dying or fleeing.

Enslin goes to the room and settles in. It is a two room suite that resembles many midscale New York hotel rooms. He methodically records his observations of the room into a tape recorder.

He goes into the living area to look around and the radio turns on to the strains of the late Karen Carpenter sweetly singing that she’s only just begun to live. Enslin dashes back into the room to find the bed turned down and mints on the pillow. After a joke about ghosts providing turn down service, he frantically searches the room for the person he is certain must be hiding in there. He doesn’t find anyone.

While making more notes, the radio turns on again with Karen Carpenter providing the tunes. The time changes and the clock starts a countdown from 60 minutes.

From that point on, Enslin’s world goes insane for room 1408 of the Dolphin Hotel at 46th and Lexington in New York is a world unto itself.

He watches as ghosts from the past make their way across the room and jump from the window in suicide plunges. He is attacked by an obscure maniacal knife wielder. The temperature fluctuates from extremely hot to extremely cold.

Enslin tries desperately to hold onto the lifeline of skepticism when the television turns on and he watches home movies of himself, his daughter, and his estranged wife playing. The scene switches to Enslin and his wife struggling with the news that their daughter is terminally ill.

The wife and daughter are elements introduced to the story by the screenwriters. They are clever and add an emotional element to the story. The writers walked a fine line between irrelevance and lugubriousness successfully. The tragedy of the Enslin family becomes the core of Mike’s stay in 1408.

Now, Mike is a believer. He wants out of 1408. He tries to get out, but the key breaks off in the lock. He opens his lap top and miraculously, he’s able to reach his ex-wife via Skype. She’s pissed that he’s back in the city without contacting her. He wants her to call the cops and get them to the Dolphin so he can get out. As he’s trying to tell her this, the sprinkler opens up and drenches the computer, cutting him off.

Suddenly, 1408 begins to crumble around him. The various pictures hanging on the wall become live scenes of tragedy. One of them, a Currier and Ives print of a ship on a stormy see shows the crew struggling against the weather to keep their ship afloat. Enslin smashes it and is immediately immersed in water. He struggles to service before succumbing.

He awakens on a beach, coughing and gagging. He is transported to a Los Angeles hospital to recover from his near drowning. His estranged wife shows up, happy to see that he is still alive. He tells her of his experiences. A lifelong New Yorker, she’s never heard of the Dolphin. They conclude it must have all been an ugly dream.

The pair reconciles and begins a new life in Los Angeles. Mike writes a new book and delivers the manuscript to the post office. When he arrives, the workers are remodeling the post office. They suddenly begin to demolish the walls, revealing that he is still in room 1408. The room is now nearly destroyed. The plaster has fallen away from the walls. The furniture is smashed. Enslin stands among the rubble, alone.

As he ponders it all in a state of near shock, he notices his computer is working again. His wife is back on Skype. She tells him that the police are in room 1408 of the Dolphin and that he’s not there. She says she’s on her way down to the hotel. Mike starts to plead with her not to when a likeness of him appears on the screen imploring her to come help him. He smashes the computer.

He awakens and 1408 has resumed its normal form. The phone rings. He answers it and hears a polite voice asking him if his stay was satisfactory. If not, he’s told that guests in 1408 have free will and are invited to use the hotel’s express check out system. A noose appears in the room. Mike is tempted, but has a better idea. He tells the room if he’s going to die, he’s taking 1408 it with him. He sets fire to the room.

The fire summons the fire department as the hotel’s guests are evacuated. Firemen break down the door and rescue Mike. His wife is waiting outside for him.

The couple reconcile, having moved past the death of their daughter. They are moving into a new apartment when Mike comes across his tape recorder that he carried into room 1408. He turns on the partially melted electronic and the tape plays with a warbled sound. Mike and his wife hear the voice of their daughter, pleading with Mike to let them all be together again.

As I stated at the outset, this was a superb movie. The screenwriters retooled the story to add some emotional depth and poignancy. They embellished the events in King’s story to far beyond what appeared in the text and added new events. None of it was wasted. All of it added to the viewing experience.

The movie was brilliantly directed and edited. The tension never let up. Hafstrom avoided the misstep that I feared would make this movie into something other than what King envisioned in his superb story. He didn’t make the hotel manager the villain or provocateur. Too many times, directors and screenwriters take an abstract concept about evil manifested in a room or a home and transfer it to a human. This is standard dumbing down by Hollywood. Thankfully, Hafstrom and the writers respected their audience.

Much of the film’s excellence can be found in John Cusack’s outstanding performance. More than an hour of this film is a one man show featuring him being scared by events around him. He never overacts. His performance never lapses from terror into silliness. Cusack’s performance was stellar.

With so much incredibly average or bad Stephen King inspired material appearing in theaters and television, it is heartening for King’s Constant Reader to see works like this and The Mist make their way into cinema. It proves that as King matures, he’s still capable of telling a spine tingling tale that will thrill movie audiences as well.

Posted by Brian Schwartz at 4:42 PM