Ring Around the Sun By Clifford Simak

Ring Around the Sun
By Clifford Simak
Copyright 1953

It is always fun to read old science fiction set in the future and ascertain what they got right and what they got wrong in the way of prediction. A lot of it is dated, but I find that the writers of the pulp era like Clifford Simak tell stories about characters rather than technology and whatever they got wrong about the future is more than offset by a rich story with great characters. Such was my experience with Ring Around the Sun. 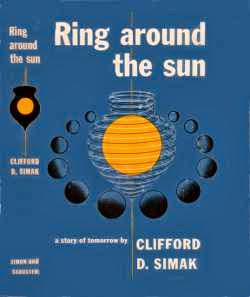 The world’s economy is being destabilized by products that never wear out. Cars never break down or die. Razor blades never go dull. Homes are prefabricated and sold at a price that is extremely low. Most importantly, food is synthesized and given to the poor for free.

They hire a man, a writer of boys’ adventures, to locate the factory and corporation. Meanwhile, with society starting to fall apart, they organize violent dissent against the products manufacturers whom they are able to identify as mutant humans.

Jay Vickers knows there’s something different about himself. He recalls a time when, as a child, he was able to travel to a fantasy land with the aid of an old fashioned spinning top. He also recalls entering that world unaided with the girl he loved as a young man.

On the way, he stops in a small town to eat and the townspeople discover that he is driving one of the new cars. A riot ensues and the car is destroyed. He retrieves the top from the car and hides. He decides his only escape is to the fantasy world. He spins the top and lands in a pastoral land, seemingly untouched by human hand.

He decides to head back from whence he came. He walks for many days before coming across a large factory operated by robots. He can’t determine what it is they are making, but the factory is complex.

He makes his way past the factory unmolested and finds his old girlfriend’s house still standing. He knocks on the door and is greeted by a robot who invites him in. While there, he overhears a conversation between the robot and an old friend he thought was dead. In that conversation, he learns that he is an android.

He flees from the house back out into the wilderness where he meets a man out hunting. He learns that that man came from his world. He fell into poverty when he lost his factory job and had to accept the synthesized food from the mutants. The mutants offered him the opportunity to move onto another earth, untouched by the miseries of the current world. He jumped at the opportunity and never looked back.

Vickers spends a few days with the man and is invited to join the small community of farmers, build a home, and live out his days there. Troubled by the information that he is not really human, he decides to head back to the “big house” as the locals call it and get some answers.

He gets there and is welcomed. His old friend greets him and explains the nature of the cosmos to him and how there are other earths in the universe, one behind another in a ring around the sun. Some men and women have evolved and developed this knowledge and are trying to save the human race by relocating them to these other earths. To motivate them, they are making life on the current earth as miserable as possible.

Vickers is also told that he was once human and his body still exists in storage. His soul was divided and placed in three vessels. One of those vessels was his friend, Eb, to whom he was talking. Eb won’t tell him who the third was.
Vickers is instructed to return to his own earth and hasten the process of moving people along. He is to hook up with a group of people who preach and practice returning to re-industrial times to tell them that their dreams can be reality.

Before Vickers leaves, he does some historical research on his old girlfriend and finds she doesn’t exist. The memory was planted to guide him to the house. With his old flame out of his mind, he discovers that he is in love with his agent, Ann, who he now knows to be a mutant. But he is afraid that she might be the third part of him which would doom the romance.

He gets back to New York and finds Ann and professes his love for her. He locates the group preaching a return to simpler times and informs them of his secret. He then decides to confront Crawford. He enters Crawford’s building to find him in a board meeting. Equipped with a film he has made, he shows the board the secret of the ring around the sun. One by one, they start to disappear. They are mutants as well.

Crawford wants to kill Vickers but can’t and doesn’t understand why. Then it dawns on Vickers that it is not Ann who is the third part of his soul. It is Crawford. He leaves Crawford to find Ann and the two go off to live in a more pastoral, simpler earth.

Simak writes very much like Ray Bradbury. His characters are not superheroes who save universes. They are everymen caught up in extraordinary circumstances. This is why I enjoy the works of Bradbury and Simak more than the modern writers who rely on technology and superheroes to drive their stories.

Much of the 1950s culture can be found in this book. Economic displacement was a hard reality of early 1950s with runaway inflation brought about by the end of World War II and the Korean War. We also see signs of the fear of communism and subversive plots by other countries to undermine our economy and way of life.

The book has a well paced plot until he stops to talk to his friend. There, we must plod through page after page of philosophical babble about the nature of the cosmos before the story gets moving again. It’s as if Simak had to pause to explain what his novel was about rather than revealing it through the plot.

Simak didn’t get much wrong technologically in the book. It is set in 1978 and the year really isn’t that important. The only glaring dated incident is when he had to wait for long distance operators to complete a call. Direct dial long distance was available in 1978.

The long narrative pause is the book’s only glaring weakness. Vickers is a likeable character who makes rational decisions based on the information he is given. This was a pulp novel, published in installments in Galaxy Science Fiction. This type of story telling doesn’t lend itself to complex character development and Vickers is the only character with any development. But he remains that simple man without agenda, just trying to do the right thing.

The plot twist at the end was brilliant. I was convinced the novel was going to end tragically with him and Ann unable to fall in love. I have to admit that I didn’t see the twist coming. That twist dramatically raised my opinion of the book and made reading it worthwhile