Book to Movie: Carrie (2013)
Screenplay by Lawrence Cohen
Directed by Kimberly Peirce
Based on the novel, Carrie, by Stephen King

In 2013, a third remake of Stephen King’s first novel and horror classic, Carrie was made. The first was a blockbuster that has become iconic. The second, made for television effort, was an atrocious effort to launch a television series based on the character. The third was a serious attempt to capture the drama and torment of the original King novel and Brian DePalma film. While not nearly as good as the original, it is not without its charm. 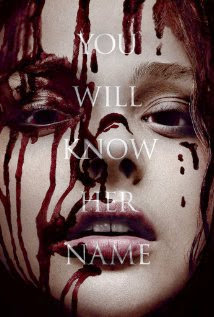 Lawrence Cohen was brought in to write the screenplay. He authored the first Carrie script and was the first screenwriter to bring King to the big screen. His first effort was brilliant, but he may have done a better job with this script.

The 2013 Carrie captures more of the King novel. The opening scene shows Carrie’s birth and her mother’s desire to kill her right out of the womb, believing her to be devil’s spawn. While not exactly as King wrote it, it does capture the essence of King’s introduction of Carrie.

Cohen also manages to accomplish with this script what neither he did in his first script nor King did in his book: he defined Tommy Ross.

Both the novel and the original screenplay were ambiguous as to Ross’ motives for taking Carrie to the prom. Was he just doing it because it was what Sue Snell wanted? Or, did he take pity on the poor Carrie and do it because he was kind? In this movie, it is clear that Ross was a genuinely nice guy who wanted to treat Carrie to a wonderful evening.

The lesser roles in the remake were well cast, well scripted, and well acted. I didn’t think anyone could top Nancy Allen portrayal of the evil Chris Hargensen, but she did. She definitely comes across as the ultimate bad girl.

Gabriella Wilde was cast as Sue Snell – the moral center of the movie. The role was originally played by Amy Irving in her first acting gig. Wilde is better. Cohen’s treatment of the character was better in this script and Wilde takes that treatment and makes the most of it.

Having said that, this movie lacks what drove the original Carrie to iconic status: great acting from its principles and great directing from the director.

No one could envy Chloe Grace Moretz for having to take the role that Sissy Spacek defined and make it her own. While her portrayal of Carrie was not bad, it certainly did not rise to the level of Spacek. Moretz wasn’t quite as mousy as Spacek when the role called for her to be demur. Nor was she menacing enough in the movie’s climax. It’s hard to top Spacek’s wide eyed stare at the crowd as pig’s blood drips from her. That image defined the original movie and is not present in the remake at all.

Moretz’s chief fault is she is simply too attractive for the role. Carrie, as envisioned by Stephen King, was a doughy, pimply faced mouse. While Spacek wasn’t exactly what King had envisioned, she was homely enough for the role. Moretz is attractive from beginning to end. Boys would have been interested in her. Girls might have hated her, but only because she would have been a rival for the affection of boys.

Peirce is simply not in Brian DePalma’s league. Two make that abundantly clear. The first is the shower scene, with all of the girls yelling, “plug it!” DePalma shot most of it from Carrie’s point of view and the girls, all attractive, looked like raving monsters. DePalma also understood that scene was going to set the stage for the rest of the film and made it lengthy. Peirce didn’t give it nearly enough play.

The second was the penultimate scene in the gymnasium in which all the students were killed. In the original, all the students laughed and kept laughing until Carrie unleashed her furor upon the crowd. In this movie, they stopped when Tommy Ross died. There was a break in the tension that was absolutely unnecessary when Carrie pauses momentarily to mourn the dead Tommy.

What followed were several exhibitions of CGI that paled in comparison to DePalma’s real fire with Carrie presiding on stage – not as the queen of the prom – but as the queen of mayhem. In the original, she killed indiscriminately. In this version, Carrrie picks and chooses her targets. It reduced the impact of the scene.

Cohen brought back, on a small scale, the terror Carrie unleashed on the town on her way home. Her confrontation with Chris Hartegen was well scripted and added a little more climax to that pivotal moment of justice than did the original screenplay.

Snell’s arrival at the White home just after Carrie has killed her mother was another change that worked well because Carrie got to ask that pivotal question that summed up the novell. “Why couldn’t you leave me alone?” Snell had no answer for her.

The ending of the remake fell well short of DePalma’s original. Who didn’t jump when Carrie’s hand reached up out of the grave to grab Sue Snell in her nightmare? I know it ranks as one of the single most frightening moments in my movie viewing experiences. The crumbling monument in Peirce’s version added nothing to the film other than an excuse to end the movie.

Carrie 2013 was a decent movie. Not as bad as many King fans feared, but better than most expected. It is entirely watchable and enjoyable. In some places, it has greater depth than the original. But without the brilliant talent of Sissy Spacek, Piper Laurie, and Brian DePalma, it is not worthy to be compared to the original which is an important and iconic film.

Posted by Brian Schwartz at 2:30 AM