After treating fans to Cell, a great zombie story, Stephen King produced Lisey’s Story, a real departure from anything he’d written before. Lisey’s Story was a love story told in past tense through the recollections of Lisa “Lisey” Landon, widow of the world famous author, Scott Landon. The result was his worst novel ever. 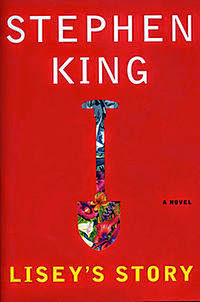 Scott Landon has been dead for two years and Lisey is finally getting around to going through his papers. Various universities are begging her for unfinished and unpublished material. One professor from the University of Pittsburgh was particularly insistent upon seeing Scott Landon’s private papers.

She starts reminiscing about their courtship and marriage as she goes through the various clippings and articles her husband saved from his many appearances. She first recalls when a deranged fan shot her husband in 1988 and how she saved him by knocking the gun from his hand.

She is forced to deal with a mentally ill sister who falls into a state of catatonia shortly after visiting Lisey and a man hired by the Pittsburgh professor to get Scott’s papers. The man visits Lisey and tortures her, promising to come back if she doesn’t deliver the papers to the University of Pittsburgh.

She remembers Scott’s peculiarities and his family’s history of mental illness that manifests itself in uncontrollable rage and murder. She recalls that Scott was able to transport himself to a place called Bool Ya Moon, another world that contains a pool that provides inspiration and healing for those who suffer and also provides ideas to great authors.

She learns that Scott has anticipated the arrival of the crazed fans and scholars who will dog her incessantly for his papers. To prepare her for this, he has prepared a “bool” – a treasure hunt of sorts that will provide her with the means to confront the man who promises unspeakable torture if she doesn’t turn over the papers.

Using Scott’s clues from beyond the grave, she is able to revive her catatonic sister who helps her confront the stalker and lure him to Bool Ya Moon where she is able to kill him. But Scott has one more Bool left to give Lisey – her very own story. Lisey’s story reveals the complexity of their marriage and their love.

I absolutely loathed this novel and have never been more disappointed in a novel. There are several reasons why.

I don’t necessarily mind a novel told in a series of flashbacks. But most of this novel was flashback and it was sometimes hard to discern what was present time and what was flashback.

The invented language and the interior language of Scott and Lisey’s marriage so pervaded the novel as to be annoying. If I read “Schmucking” one more time, I’d have tossed the novel into the fire. So much of this novel was taken up by these made up words.

It seems as if King was attempting a real literary effort instead of a Stephen King novel and failed horribly. I don’t necessarily mean horror. King has often stepped outside the genre of horror and written wonderful works such as Rita Hayworth and the Shawshank Redemption. Lisey’s Story had none of the charm of that story. It was an attempt to write something “serious” and it resulted in a novel that was a struggle to read.

The villain seemed to have been directly lifted from Secret Window, Secret Garden. The mannerisms and speech were nearly identical. There was certainly a degree of laziness on King's part here.

It did have its moments that were entertaining and engaging. The demise of Scott’s brother and his father were enthralling. The final chase scene through Bool Ya Moon, once King got going with the present tense action was also well written. But I could have done without all of the interior language of love and the romance in the novel.

Lisey’s Story was, by far, Stephen King’s worst novel and I shall never read it again.