In the early and mid 1990s, ABC produced a number of miniseries based on Stephen King novels. A couple like The Stand and IT were quite good. Some were enjoyable but not great like Sometimes They Come Back, and others were horrible such as The Shining and The Langoliers. While marginally better than the Langoliers, The Tommyknockers falls into the category of dismal. 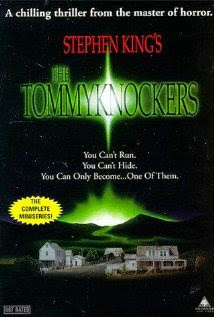 Part of the problem was the lack of characters in the novel. King only developed Bobbi and Gard to any depth. Ev Hillman got some development, but was not a major character. To expand the story to miniseries length, Cohen had to develop characters. The additional characters were just horrible.

Becka Paulson, just a piece of trailer trash who warranted a chapter, got an upgrade to deputy under Sheriff Ruth Merrill. Also added as major characters were Trooper Butch Dugan, Postmistress Nancy Voss, and the Hillman family.

Cohen stayed true to the essence of the King story, which was no prize to begin with, but completely rewrote events for television. More special effect scenes were added and a romance between Trooper Dugan and Sheriff Merrill was created. To describe all of the deviations and plot changes would be to write a summary of the movie, which isn't necessary to convey how bad it is.

Power employed some talent such as Jimmy Smits who played Gard, Marge Helgenberger who played Bobby. Hollywood veteran E.G. Marshall was brought in to play Ev Hillman. Smits and Helgenberger did what they could with the poorly conceived script. The writing just wasn’t there. The only performances that stood out were Marshall and John Ashton as Trooper Dugan. Alyce Beasely (whom I always thought was an underrated talent in Hollywood) did well with Becca Paulson.

It is surprising that this particular miniseries ended up as badly as it did because Cohen has always produced quality when adapting King. He doesn’t have an extensive list of writing credits, but he did write the two Carrie scripts that matter and he wrote IT. While the Tommyknockers was the weakest source material he’d ever worked with, I didn’t expect Cohen to make it worse. Yet he managed.

To bring it to a close, Cohen rewrote the ending to give it a happier conclusion. Gard, with the Tommyknockers bearing down on him, flies the ship out. What's left of Haven returns to normal and Bobbi and her beloved dog Pettie are left to ponder it all. Not the ending that King envisioned and not the ending that should have been.

Cohen also downplayed the alcoholism a bit. In the novel, Gard's need to drink was front and center and he was unable to overcome it. In the movie, Gard's demons show up, but he almost always is able to defeat them.

While I did not indicate it in my review of the novel, I think The Tommyknockers, along with Misery, are important entries in the King canon. Misery is great and The Tommyknockers below average. For what The Tommyknockers lacks in interesting story, it is a glimpse into the personal turmoil of King's life at that time while he struggled with his own alcoholism and addiction. Eliminating this eliminated the galvanizing element of King's original story.

See it once to say you saw it if you’re a diehard King fan. But for those who are casual fans of sci-fi or are looking for Lovecraftian overtones should avoid it because it just isn’t worth watching.

Posted by Brian Schwartz at 2:35 AM