The Hitchhiker’s Guide to the Galaxy By Douglas Adams

The Hitchhiker’s Guide to the Galaxy is considered one of the great science fiction novels of all time. It’s cheeky take on the genre is a departure from the normal sci-fi fare that often takes itself entirely too seriously. 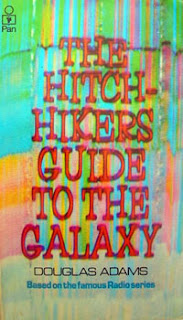 The book opens with an angry Arthur Dent protesting in front of the bulldozers that have dome to level his house. They are there to make way for a new highway bypass. Dent’s friend, Ford Prefect, who is an alien hitchhiker writing updates for the Hitchhiker’s Guide to the Galaxy stops by and talks Dent into giving up his protest and joining him at a local pub.

There, Prefect explains that the apocalypse is nigh. An alien race is going to destroy the earth and it is time for them to vacate the planet. A race known as the Vogons have arrived to clear the planet Earth out of the way for a space route bypass. Prefect and Dent board the alien ship just as it destroys Earth. There they are held prisoner and forced to listen to the third worst poetry in the universe.

The pair is forced out of an airlock when the Vogons decide to execute them, but are picked up before they suffocate. Their rescuer is none other than Zaphod, President of the Universe who has stolen the ship, the Heart of Gold in an attempt to locate the legendary planet, Margathea, where luxury planets were once manufactured for wealthy and advanced races. Zaphod’s crew includes a depressed robot named Marvin and a woman named Trillian.

The group eventually locates the planet and land there. They explore the ruins and meet a member of the super race that once ran the operations. He tells them an universal recession caused the planet to shut down. They encounter a great computer known as Deep Thought who tells them that the answer to life, the universe and everything is 43. They also learn that man was not the true ruler of earth. It was mice who spent hundreds of thousands of years manipulating man.

The mice that belonged to Trillian offer to buy Dent’s brain when they find out he has the solution in his head. Dent doesn’t want to part with his brain and the group flees from the planet.

The Hitchhiker’s Guide to the Galaxy is the first in a five book series, and is a stand alone novel. Standing alone, it’s not a particularly good novel and I fail to see how it has garnered so much respect over the years.

Its humor is entirely British. I’ve never been a fan of British humor. The story is thin and linear. The characters have no real depth. There was nothing in the story so bad as to elicit groans, but on the whole, it was thin gruel. If there was veiled humor directed at a particular sci-fi author or novel, I missed it.

The book was not without its charms. Finding that the worst poetry in the universe was written by a woman in London was sort of clever and the origin of Ford Prefect’s name was cute.

I’ve put off reading this book for years and when my book club selected it for the book of the month, I was pleased to be compelled to read it. Having read it, I found out I wasn’t missing much.