The Tommyknockers By Stephen King

The Tommyknockers
By Stephen King
Copyright 1988

With the exception of a couple short stories written early in his career, Stephen King had never tackled science fiction writing. His idol, H.P. Lovecraft, had a knack for blending the genres of horror and science fiction into masterpieces such as the Color Out of Space (which served as the inspiration for the Tommyknockers). Unfortunately, Stephen King does not share Lovecraft’s ability to straddle the genres. In what was apparently supposed to be a Lovecraft pastiche, King gets bogged down in melodramatic character development and some really ridiculous plot elements. 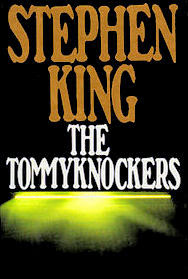 The story opens with novelist Bobbi Anderson tripping over a piece of metal jutting from the ground on her farm in Haven, Maine. She starts to dig around it and receives a shock from the metal. She develops an inclination to excavate this piece of metal that becomes all consuming. When she’s not digging, she finds that she’s inspired to build nifty inventions such as a hot water tank that runs on batteries and a device that converts her lawnmower into a hovercraft.

Meanwhile, her friend, a poet by the name Jim Gardener, is ruining his career in New Hampshire. Gardener is at on tour with a group of poets doing readings. Gardener has managed to stay dry through most of the tour, but gets drunk one night at a party held for the poets. He overhears the party’s host discussing nuclear power with one of the party’s guests – a man from the power company. An authority on nuclear power James Gardener is and belligerently enters the argument citing the horrors of Chernobyl and the near death experiences at Three Mile Island Fermi.

Gardner ends up making a mess of the party and himself and upsetting guests. He is asked to leave, but before he does, he attacks Ted the Power Man with an umbrella. He wakes up a few days later on a breakwater on a beach near a hotel, horribly hung over.

He decides to commit suicide there and then. But before he can do so, he gets an inkling that his one true friend in this world, Bobbi Anderson, is in trouble. He puts off suicide to hitchhike to Maine to see Bobbi.

He arrives at Bobbi’s farm to find her exhausted and emaciated, having been working day and night at her excavation. Gard puts her to sleep. Before she drifts off, she shows him her latest invention, a Royal typewriter that allows her to transmit her novels from her brain to be typed on the machine. Gard is blown away by what he sees.

The next day, properly rested and fed, Bobbi leads Gard to the site and shows the smallest hint of a very large oval she has unearthed. She invites him to touch it. When he does, he gets a blast of radio stations running through his brain, but no great inspiration to dig or any ideas for inventions. They surmise it is because a metal plate in Gard’s heat – the result of a teenage skiing accident – blocks the ships emanations from penetrating his brain.

As Bobbi and Gard unearth more of the ship, wonderful ideas start occurring to people all over Haven who invent modern conveniences out of household items and batteries. One of those Haventes is a 10 year old boy named Hilly Brown who has just discovered the art of magic. Hilly develops a device that makes things disappear – not through a trap door, but for real. He decides to put on a show to impress his friends and family.

He’s done a couple shows before, and they were met with polite acceptance. He is determined to make this one his piece de resistance. The subject of his act is his little brother, David, who is scared to do it, sensing something strange in his brother. Hilly sets up the act in front of his parents, his grandfather, and a few friends who wait impatiently for it all to end. When Hilly activates his device and David disappears, they are not impressed. His parents tell him to find David and come to supper.

Except Hilly can’t find David. Every other item he has made disappear has returned. David won’t return. Eventually, David’s disappearance is reported to Haven constable who organizes a search of the area. No trace of David is found. Meanwhile, Hilly has lost his mind and has become catatonic. He is sent to a hospital in Derry and is accompanied by his grandfather. His parents are too wrapped up in what is going on in Haven.

Soon, the project to excavate what is clearly a spaceship consumes the entire village of Haven. Those who try to get in the way, like the town constable and state troopers, are killed. Bobbi is the town’s spiritual leader in the quest to unearth the ship. She and a group of people meet in her garden shed every night with strange equipment running. They are hastening their, “becoming” which is their conversion from human to an alien life form.

Gardener continues to labor away even though the ship has no effect on him. He is there to help his friend Bobbi who he sees being transformed into an alien life form, and to keep whatever power this ship holds out of the hands of the government that he considers evil and corrupt. Bobbi’s friends don’t like Gard, but they keep him around because he’s a hard worker and Bobbi, their leader, insists that he be kept around.

As more and more of the ship is unearthed, the air in Haven becomes toxic to outsiders and people quit coming to Haven. The work carries on.

Back in Derry, Hilly’s grandfather, Ev, is convinced that something strange is going on in Haven. First, he tries to convince a reporter who dismisses him as a foolish old man. Then he approaches the state trooper in charge of the investigation of the disappearance of two state troopers returning from Haven. The two were zapped out of existence by weapons invented by the Havenites. The trooper, “Monster” Dugan agrees to accompany Ev to Haven to investigate. Ev provides Trooper Doogan an air tank so he can breathe in Haven. Ev is immune because of a metal plate put in his head after a war wound.

They find the ship and are confronted by Bobbi and her friends. Dugan shoots Bobbi before he is killed. Ev is taken captive and put in the shed to be used.

Bobbi is less and less human by the day. Gard knows that the point will come when there isn’t enough of Bobbi Anderson who loves him to keep the alien Bobbi from killing him. He wants to see the inside of that ship before he dies. After several months of excavating, they finally find the hatch.

Bobbi and Gard descend into the hatch and find the dead crew of the ship. It appears they were fighting over the controls when they crashed. Gard mocks them and Bobbi is a little disheartened.

Gard realizes that his time is short now with most of the residents of Haven well on their way to becoming. He decides to see what is in Bobbi’s shed. He enters and finds Bobbi’s dog, Ev Hillman, and Bobbi’s sister immersed in tanks of green fluid, apparently powering a supercomputer inside the shed. Ev, still alive, implores Gard to use the computer to bring his grandson back from Altair 4, the place that the Tommyknockers send the unwanted. Gard does not know how to do it and flees from the shed.

A few days later, Bobbi informs Gard that his time has come. She wants it to be peaceful. She lays out a bottle of booze and a bottle of valium, telling him to take lethal doses of both while they talk about the true nature of the Tommyknockers. Suspecting Bobbi is going to kill him, Gard brings a gun with him. While at the kitchen table, swallowing valiums and drinking scotch, Gard shoots Bobbi and kills her.

All of Haven is drawn to the Anderson farm when their minds sense that Bobbi has been killed, leaving Gard little time to accomplish what he needs to do. He goes to the shed and uses the computer to bring David Brown back from Altair 4. The drain on their stamina kills the shed occupants. Havenites chase Gardener into the woods, inadvertently setting it on fire. Gard races though the fire to the ship. Using the controls he instinctively knows how to operate, he flies the ship out of the ground and into space.

Haven burns and firefighters are unable to enter the town to stop it. One by one, the Havenites die. The few survivors are picked up by the notorious Shop – a secret government agency introduced in Firestarter – and transported to Texas where they are studied until they die. The book ends with David Brown snuggling up against his beloved older brother in a Derry hospital room.

The Tommyknockers does not rank as one of the worst of King’s works, but it is a weak effort compared to the material he’d put out previously. Written at the worst point of his drug and alcohol addiction, the book drips with desperation and despair. It’s too much and it reduces Gardener as a character.

One chief failure of the book is to develop Gardener as an anti-hero. Anti-heroes are flawed individuals who ultimately carry out noble deeds. King meets the textbook definition, but Gardener, as he’s written, is unlikeable. His anti-nuke tirades and anti-government paranoia are too over the top. His only redeeming quality is his love for Bobbi. He does carry out his noble deed in the end, but it is not for Bobby or for Haven. It is to keep the ship out of the hands of the “Dallas Police” which is his pejorative term for all authority. Making Gardener more likeable would have helped.

Also, the novel fails to move. There is little action and lots of talking and philosophizing. Much of the action that is in the book is foolish. The soda dispenser that flies around killing people is just too ludicrous to swallow and comes across as hokey.

As for it being Lovecraftian, I can see some connections. The Tommyknockers arrival obviously predates the rise of man since a large part of the ship has become part of the bedrock. The creatures, as they are described, are Lovecraftian. But the story is not. Lovecraft scared people with his stories. This was not a scary story.

This and the length of the novel make for some dull reading. The book opens nicely with the development of Bobbi and Gardener and their relationship. From there, there is no character development of peripheral characters and we are not made to care what happens to the town of Haven.

It seems as if King was trying to capture some of what he accomplished in ‘Salem’s Lot by populating a town full of people we knew and then destroying it by nefarious means. We did not know the people of Haven nearly as well as we knew the people of ‘Salem’s Lot and we cared a lot less when they died.

Posted by Brian Schwartz at 2:19 AM