Bill Hodges is a retired police detective haunted by three crimes that went unsolved on his watch. One was a freeway killer who preyed on women at rest stops. Another was the murder of a woman seemingly by her husband, but the police could not get enough evidence to make a case stick. The third was a ghastly crime of mass murder where an unknown suspect stole a powerful Mercedes Benz sedan and drove it into a crowd of people lined up for a job fair, killing several including a baby. 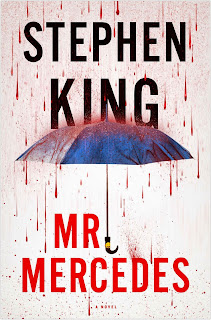 Hodges is lured out of retirement (and away from suicide) by an online message taunting him over the crime from the presumed perpetrator. He resumes his own, private investigation. It leads him to the woman who owned the stolen Mercedes. She has committed suicide, but Brady falls in love with her younger sister. She hires him to find out who and what drove her sister to suicide.

Brady Hartfield is a computer tech for an electronics retailer. He lives with his alcoholic mother in and has with her a semi-incestuous relationship. Having killed his younger brother many years before, Brady is a psychopath.

Brady is an electronics whiz who has built an electronic device that allows him to steal signals from key fobs. Using this, he stole the Mercedes and slaughtered the job seekers. But he aspires to a larger kill; one that will make him a legend. First, however, he is determined to rid himself of Bill Hodges.

While Bill is attending the funeral of his girlfriend’s mother, Brady plants a bomb in his car. Unfortunately for Bill, his girlfriend is driving his car when it explodes. She is killed and Bill is more determined than ever to find the Mercedes Benz killer.

With the help of his teenage gardener and a middle-aged, mentally ill niece of his recently departed love, he tracks Brady to his house where they find his mother, dead in bed – the victim of an accidental poisoning at Brady’s hand. They learn of his plan to bomb the civic center during a boy band concert. They race against time to foil the plot.

Stephen King has conjured some horrific, non-supernatural villains in his more than 40 years of writing. Annie Wilkes is every bit as menacing as Pennywise the Dancing Clown. Roland Dinker, the Nazi general in Apt Pupil and his protégé were as ugly as they come. With characters like that to his credit, it is such a shame that Brady Hartfield is so lackluster.

Brady is not particularly sinister. He’s diabolical, but not introspective. The most significant reason for this is that nobody is afraid of Brady. The aforementioned King villains inspired fear in people. They terrorized their respective victims. Bill Hodges never fears Brady and he and his companions are the only people who know who and what Brady is. Without fear, Brady fall flat as a villain.

King is known for stellar character development. He often delves deeply into the backstory of even insignificant characters to enrich the story. In Mr. Mercedes, his protagonists are every bit as limp and lifeless as his villains.

We get enough backstory on Bill Hodges to make him functional as a protagonist, but King doesn’t develop Janey (Bill’s love interest) at all. When she dies, the reader just doesn’t care that much. We aren’t emotionally vested in her. This was supposed to serve as the emotional turning point in the novel. But without character development, it didn’t work.

Bill’s sidekick is an African-American teenager. Kudos for creating a non-traditional duo. But Jerome is perhaps the most irritating character in King’s career cast. I wanted him to die and he was one of the good guys! Jerome frequently lapses into an irritating, African-American retro slave patois that serves no point except to remind the reader over and over again, JEROME IS BLACK!

Mr. Mercedes takes a while to get going. Actually, it takes a very long time. But once it does, the plot races to a rewarding climax inside the civic center. For all that King does to work against himself and his novel, the payoff at the end is satisfying.

The novel is the first of a trilogy built around Bill Hodge and presumably – given the final paragraph of the novel – Brady. We can only hope that King can develop his hero and his villain sufficiently in the next novel to make it more interesting than the first installment.

Posted by Brian Schwartz at 2:37 PM