Stephen King’s novel, Pet Sematary was billed as “the novel that frightened Stephen King.” The book lived up to its billing and stands as one of his creepiest tales ever. Revival got similar billing. 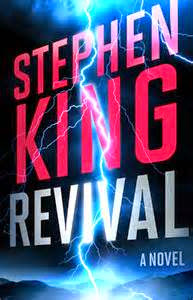 Supposedly King thought Revival was the scariest thing he’d ever written. He told an interviewer that the novel was so dark, he was glad to be finished with it. Early reviews said the ending was so dark and compelling, it was disturbing.

While Pet Sematary did not disappoint, Revival doesn’t quite live up to its billing.

The story opens with the arrival of a new minister in the small Maine town in 1962. Jamie Morton, just 10, is one of the first to meet the new minister and is immediately taken with him. Rev. Charlie Jacobs, his wife and small son are quickly welcomed and made part of the community.

Soon after Jacobs’ arrival, Jamie gets a notion that Rev. Jacobs might be a pretty smart dude. Jamie’s older brother, Conrad, suffers a throat injury and is left unable to talk. One afternoon when Jamie and Conrad are visiting Rev. Jacobs, he attached some electrodes to Conrad’s throat. With a small charge of electricity, his voice is restored.

Tragedy destroys the Jacobs family and rocks the small Maine town. On their way home from Castle Rock, Mrs. Jacobs and their young son are killed in a car crash. Jacobs is devastated beyond conciliation. He is absent from church for several weeks. When he makes his return, he stands before the congregation and renounces his faith. While many in town still sympathize for him, he can no longer function as a minister. Much to Jamie’s chagrin, Charlie Jacobs packs up and leaves town.

Life goes on for Jamie. He falls in love with guitars and rock and roll. He joins a local band and plays gigs around the area. He gets his first car and his first girlfriend. After a few years, he and the girl drift apart and he makes a name for himself as a reliable session rhythm guitar player. But the life gets to him and he falls into the trap of heroin. In his mid-30s, he finds himself unemployed and living in a seedy Oklahoma motel room. He decides to go to the local carnival to score some heroin when he comes across his old friend Charlie Jacobs.

Charlie is now working as a huckster photographer, using his extensive knowledge of electricity to take elaborate photos of people. He is delighted to be reacquainted with Jamie, but immediately recognizes Jamie’s problem. He thinks he has the solution.

Charlie takes him to a laboratory and hooks him up with electrodes similar to those attached to his brother all those years before and puts an electrical charge through him. Jamie is cured. When Charlie prepares to take his show on the road again, he secures a job for Jamie at a recording studio where he has a friend he cured of disease many years before.

More years pass and Jamie is successful as a recording engineer and producer. He remains heroin free. Meanwhile, Charlie Jacobs has gone back to religion. He is now a revival tent preacher who heals the sick and infirm. Jamie follows Charlie’s career from afar with great interest.

Jamie has strange impulses that can only be explained by Charlie’s treatment. Research online reveals a high rate of suicide or mental illness for those who receive Charlie’s “cure.” Jamie decides to confront Charlie about his cure and its true nature.

Charlie is now mega-wealthy and retired from the tent revival circuit. He is still pursuing his passion for curing with electricity – but not the kind that Benjamin Franklin and Thomas Edison conceived. Through coercion, he enlists Charlie’s help in harnessing the ultimate energy of the cosmos to perform the ultimate miracle. The results are horrific and haunting.

I stated earlier that Revival did not live up to its billing. That does not mean it was not a good novel. It was, in fact, quite good. Just not as good as the reader is led to believe. In Revival, King weaves in Lovecraftian notions of powers and beings beyond the human perception. He pays homage to Mary Shelley and Frankenstein through his transformation of Charlie Jacobs from rational being to mad scientist. It’s all traditional horror brought into the modern age by the modern master.

First person narratives can be tedious to read. As my friend who is an English professor once remarked, reading them can be like sitting with a drunk at a bar who recounts their sad tale of woe. King has written several first person narratives and he is comfortable and capable with the style.

Jamie’s tale is never boring. He’s not given to self pity and there’s just enough introspection to develop Jamie as a character. No sad tales of woe and no digression. The reading was easy and the tale interesting.

The book’s chief weakness was the ending. Although it was not a major letdown on the scale that Dean Koontz sometimes let’s you down, I was looking for more. I expected something dark like Pet Sematary or epic like IT. Instead, King gives his climax a rather vanilla treatment. It is dark to be sure, but not as dark as I expected given Charlie Jacobs’ emotional devolution.

It is also rather silly at times, reminding me of Dean Koontz trying to terrify the reader through description rather than letting the reader’s imagination serve him. King seldom makes this mistake. But in Revival, that silliness – while not ruining the novel's end – detracted from it.

It was enjoyable seeing King revisit the horror genre after the rather dull Mr. Mercedes. We do not know when he’ll visit again as his next published work will be a sequel to Mr. Mercedes.

For those who say they like old Stephen King work, this book will be a treat. It is straight horror without the political agenda, without the commentary on aging, and without the rehashing of major bodily injury. Revival is a fine horror novel that takes the reader back to King’s glory days.

Posted by Brian Schwartz at 3:26 PM