I Sing the Body Electric By Ray Bradbury

I Sing the Body Electric
By Ray Bradbury
Copyright 1969 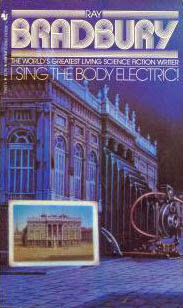 I’m decidedly not a Hemingway fan. But it’s easy enough to see Bradbury was and he shows us how much he treasured Hemmingway’s works. It’s not hard to see the unnamed main character as a psychopomp, delivering Hemingway’s soul to Heaven as he would know it.

The Terrible Conflagration up at the Place
Revolutionaries in Ireland set out to burn their lord’s manor house, but they forget the matches. When they arrive, the lord of the manor invites them in. They inform him of their intent, quite politely and he agrees to allow the burning. He asks the sackers if they will spirit away his art collection for safe keeping. They agree and take off with the paintings. A few hours later, they return.

There were echoes of Mark Twain in this story, but the end was wholly unsatisfying. While there was a fair amount of humorous irony in the story, the climax, as it was, completely lacked in humor or irony.

Tomorrow’s Child
The Horn’s have a baby and that baby is a blue pyramid with three eyes and six tentacles. Their baby, the doctor informs the Horns, was born into another dimension. This baby belongs in that dimension. While the doctors work feverishly for months to figure out how to get the babies back to their proper dimensions, the Horns raise the “child.” Finally, the day comes when the doctors have it all figured out.

The tale is so improbable that it is interesting. The opening paragraph is so matter of fact, much like Gregor Samsa in Metamorphosis

The Women
A couple lounges on the beach on the final day of their vacation. The woman senses that a presence in the ocean beckons to her husband, trying to lure him into the water. She tries every delaying tactic she can think of to keep him out of the water. When it starts to rain, she thinks she’s won. But the lure of the blue water proves too much.

This was a story of atmosphere and stirring words more than plot. There was very little plot to it. It does demonstrate Bradbury’s ability to weave moods with the language. Beautiful.

The Inspired Chicken Motel
It’s 1932 and the Great Depression is raging. A family of four is traveling down Route 66 to look for a job and some prosperity. They stop at a fleabag motel where they find a chicken who lays eggs with inscriptions very much like fortune cookies. The family leaves the hotel with new found hope mixing with cynical skepticism.

This story was mildly entertaining. It would seem in this book that Bradbury is trying much harder for rye humor than any serious science fiction.

Downwind from Gettysburg
The manager of a theater is alarmed when someone puts a bullet into the head of his animatronic figure of Abraham Lincoln. The modern assassin is also named Booth, although he has a different first name. The theater manager confronts the assassin and listens to his lame excuse for destroying the robot. Then the manager tells Mr. Booth the real reason for the crime and ends his hopes for glory.

A writer on Huffington Post compared this story to the vainglorious father of the notorious “Balloon Boy” event several years ago when the father contrived to have his young son become ”trapped” in a hot air balloon with the hopes of getting a reality show out of the deal. My own thoughts went to Mark David Chapman who killed John Lennon for the sheer glory of doing it.

Downwind from Gettysburg was made into an episode of The Ray Bradbury Theater.

Yes, We’ll Gather at the River
The residents of a small California town are just a day away from a harsh reality. A new interstate highway is going to open tomorrow and with it take the traffic local merchants rely on for commerce. A cigar store owner ponders his bleak future and that of the town.

This story tells of an all but forgotten chapter in American history. When construction began on the interstate highway system in the 1950s, millions of motorists were moved away from secondary roads and the small towns where they bought gas, bought lunch, and sundry items. Many towns “missed” by the highways died. This beautiful and touching story brings that era to life very much reminiscent of Steinbeck.

Cold Wind and the Warm
A group of faerie people arrive in small town Ireland and make friends with the regulars of a small pub. They charm and entertain the pub patrons with songs and stories of how disparate people come together to become one people. One Irishmen gentleman discerns the faeries true nature and purpose.

I really struggled with this story and did not like it at all. It had the whimsy which was Bradbury’s signature style. But while beautifully written, I just loathed the story. I’m not much for Irish yarns.

Night Call, Collect
An old man is the last survivor on Mars after the rest of the population returns to earth on the eve of atomic war there. He starts receiving phone calls from himself. The first call is from his 20 year old self, then his 21 year old self, then 24, etc. The calls tease and torment him – each a transcription he made in his youth to keep busy. Then he gets a call that is not himself, but the captain of a rocket come to rescue him after 60 years. He rushes to New Chicago to meet the rocket, but all he finds are more phones.

This is a riff on a tale told earlier in The Martian Chronicles. This tale is much darker and quite entertaining. The first real hard sci-fi/horror story in the book.

The Haunting of the New
Grynwood, an old castle once host to the most lavish parties ever known in Ireland, shall host no more parties, for she has burned to the ground. Her owner had built in its place an exact replica. But it’s just not the same and the house, new, wants no old people in its midst.

This story is written very much in a literary style and I wanted to not like it. The flowery, over the top language usually turns me off. But Bradbury is able to evoke emotion with his prose that transcends my dislike of inflated language. This story is about the pain of transition and not being able to go home again when it is not home.

I Sing the Body Electric!
A widower with three children replaces his dead wife with a robot grandma. The grandma is delivered and the two boys immediately take to her. The girl, Abigail, does not and refused to treat the electric grandma like anything but a machine. When grandma meets with tragedy, the source of Abigail’s hostility is laid bare.

A riff on Walt Whitman’s poem of the same name that discusses what makes a human, human as opposed to a souless machine. This story explores the nature of grief, the relationship between generations, and is somewhat over celebratory of what machines are capable of – or will ever be capable of. It is one of Bradbury’s more heartwarming stories.

Ray Bradbury adapted this story for The Twilight Zone episode of the same name. Despite his personal fondness and close relationship with Twilight Zone writers Rod Serling, and Richard Matheson, it was the only original script Bradbury penned for the television series.

Tombling Day
An old woman attends the relocation of her old beau’s grave. She decides to have the body brought back to her house and the casket opened. She looks upon her beloved’s body, sixty years in the ground, and laments that he still looks young while she has grown old.

She is old, he is young. Bradbury says this over and over again without going anywhere. The end is just gibberish. This story was a real dud.

A Friend of Nicholas Nickleby’s is a Friend of Mine
A man arrives in Greentown, Illinois with the unlikely moniker of Charles Dickens and he is a writer. A young man is thrilled to have the famous writer in his mom’s boarding house and is quickly drawn to him. But he’s not so much a writer as a memorizer of tales.

I didn’t see where Bradbury was going with this one. I thought it was to inspire the frustrated writer to keep writing, but the unlikely Charles Dickens never writes anything original. He just rewrites Dickens’ novels. Nothing inspirational there.

Heavy Set
A mother laments her emotionally immature son who spends his days sculpting his body with weights. At 31 years old, he refuses to interact with anyone and takes out his frustration on weights and a punching bag.

On the surface, the story has no plot. But Bradbury’s writing makes the reader tense. You wonder if and when Heavy Set is going to explode. Will he hurt his mother? Will he hurt other people? It’s an emotionally taut story.

The Man in the Rorschach Shirt
A psychiatrist calls it quits when he finds out his senses of sight and hearing have been lying to him for years. Restored hearing and improved vision, he finds, hinders his imagination. He tells a former colleague how he spends his days treating people with his bizarre, multi-patterned shirts.

A Bradbury allegory on writing and imagination. Writers create and imagine, he points out. If all we rely on through our day is what we see and hear, we are left bereft of creativity. Lots of allegory, little story. An enjoyable read nonetheless.

Henry the Ninth
The last man to inhabit England talks with his old friend who is about to depart. The English and all northern Europeans have abandoned their homeland for warmer climes.

Bradbury dedicates several short stories to being alone. Not necessarily loneliness because often, Bradbury’s characters are not unhappy to be alone. There were a couple in The Martian Chronicles that were stellar in their telling. This one wasn’t.

The Lost City of Mars
Captain Wilder, the intrepid explorer from The Martian Chronicles, sets out with a millionaire and other illuminati aboard a yacht on the Martian canals. Their destination is a lost Martian city. They find the city and the city finds them. Each is offered by the city what he or she wants – or thinks he wants. Some reject the deal, some don’t.

Perhaps this was a story written for The Martian Chronicles and left out. If so, leaving it out was a good idea. It lacks the beautiful simplicity of the other stories in that collection.

Christus Apollo – Cantata Celebrating the Eight Day of Creation and the Promise of the Ninth
Christianity meets scientific speculation in this Christmas poem where Bradbury contemplates life on other worlds and whether or not they were created by and worship the same God as Christians on earth.

This is a poem and as I am wont to say when evaluating a poem – I don’t feel qualified. I don’t know good poetry from bad. But I know what I like and I liked this.

I Sing the Body Electric is one of the weaker Bradbury compilations for fans of his sci-fi work. Much of the book relies on playing with the ghosts of authors dead and other mildly fantastical tropes. The title story and the Lost City of Mars stand as the only real sci-fi tales.

Of course, there is more to Bradbury than science fiction and the whimsy that characterizes Bradbury’s Greentown can be found in almost every story in this volume.

While not nearly as interesting as The Martian Chronicles or The Illustrated Man, I Sing the Body Electric is worth the time to read to find a few Bradbury tales you won’t find anyplace else.