The Martian By Andy Weir

The Martian
By Andy Weir
Copyright 2014

Mark Watney is part of a crew of six that rank among the first to visit Mars. He’s about to become its first permanent resident. 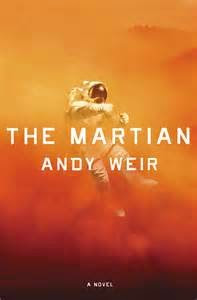 Watney is left behind on the red planet when an accident leads to a partial tear in his space suit. With no vital signs showing on the ship computer and a dust storm that threatens the crew’s departure, they elect to leave him behind.

But Watney is alive. Left behind, he must rely on his skills as a botanist and as an engineer to survive in a harsh environment with no means to communicate, he must find a way to generate food, oxygen, and water.

He knows that the next mission to Mars is more than a year off. He knows that the food and other supplies will be arriving before that. He calculates how much food he will need and sets out to make that happen.

Watney devises a plan that allows him to grow potatoes in the small quarters left behind as part of the lander. He finds a heat supply and is able to generate oxygen and water. His only means of entertainment are mystery novels, disco, and 70s television left behind by his fellow astronauts.

Meanwhile, back on Earth, NASA has announced his death and are working on bringing the other five astronauts home. An observer of Martian satellite photos notices objects moving in the camp and NASA realizes they have a stranded astronaut. They immediately try to devise a means of communication and a rescue plan.

Watney is able to find the Pathfinder and Sojourner landers on the Martian surface and is able to use their parts to contact earth. NASA officials are amazed at his ingenuity in being able to grow potatoes, harvest water from the Martian atmosphere, and adapt the two rover vehicles for long range travel. They work with Watney to prepare him for the 3,200 kilometer journey to the Schiaparelli crater where the Ares 4 module will land.

Watney is forced to overcome catastrophic equipment failures, impossible weather, and his own doubts to survive in a world harsher than anyplace on Earth. NASA personnel on Earth work against time, defying budgetary restraint, personal endurance, and science to save the life of one man.


The Martian was another book of the month club selection and was almost unanimously viewed positively for our group. My own opinion was mixed while not enjoying it very much.

This was science fiction for engineers. In every process Watney undertook, he provided the science and engineering behind it. I understand this kind of detail is important to some people – like engineers and scientists. The vast majority of the reading public is neither. To us, this was a long series of distractions from the story.

This was the only major drawback of the book. Yet it was pervasive enough to significantly reduce my appreciation of the book. More than 70 percent of the book is Watney’s log entries. Weir does a wonderful job of developing Watney through these log entries. I felt like I knew the guy. And had I been Whatley, I’d have certainly featured my own cleverness and ingenuity in my log. I’d want my posterity to know how smart I was. But page after page about the nitrogen cycle in soil and the botany of the potato plant is much, much more than I want.

It’s a shame that Reid chose to write like this. He took an oft-told tale—older than Robinson Crusoe – and retold it in an exciting manner. That is not easy. It would have been a delightful book had it not been for the gross distractions. Many science fiction readers read the genre not for the science – but for the humanity to be found in alien people and settings. Much of Watney’s humanity and much of the appeal of the story was lost in what frequently devolved into a thinly veiled technical manual.

For fans of fiction related to Mars, it's hard not to read The Martian and not think of the 1964 sci-fi classic, Robinson Crusoe on Mars. It's the exact same premise with the same character with the same motivations. However, the 1964 is not remotely scientific -- even by the standards of 1964. I love that silly, unscientific movie much more than I like The Martian

Andy Weir is living the fantasy of so many unpublished authors. His book was self-published in Amazon and was discovered by an agent. Congratulations to Weir on cutting through the vast wasteland of self-published books to break through.

This book will probably appeal to aficionados of hard sci-fi. There are many devotees to the genre who love to analyze science and pick at it. I’m no scientist, but I’m thoroughly convinced that Weir’s science is air tight which will delight those who revel in that sort of thing.

Posted by Brian Schwartz at 3:25 PM