Baal was Robert R. McCammon’s first novel. It was very much a novel of its time and would launch a brilliant writing career that would span horror, dystopia, mainstream thrillers, and historical fiction. 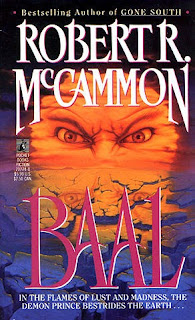 Baal was born of a rape. Orphaned when his parents died when he was a small child, he moves to a Catholic orphanage. There, the boy who was Jeffery Harper Raines becomes Baal. Baal launches his reign of terror and proves that he is much more than a simple boy.

Years later, Baal sets up camp in the Kuwaiti desert. Followers, rich and poor, from all over the world are drawn to him. A researcher of religious cults disappears after embarking on a quest to learn more about Baal and his followers. His professor, Dr. Virga heads to Kuwait to investigate.

Virga arrives and is greeted by the cult of Baal. They are the lowest of the low in this Third World Country. They are also oil barons and the nation’s wealthy. They have coalesced around the enigmatic figure.

Virga finally gets his audience with Baal and finds his friend has gone insane and kills himself in a fit of despair. Baal tries to attack Virga, but is unable to because of the Christian Cross Baal wears around his neck. Virga is beaten and left for dead in the desert.

He is rescued by a man named Michael. Michael has a comfortable tent set up near Baal’s camp. Michael, too, is in pursuit of Baal for reasons he will not say.

Baal and his followers decamp from the scorched wastes of Kuwait and head for the frozen tundra of Greenland. Michael and Virga follow in pursuit. Michael and professor Virga land in Greenland. There, they find the wrath that Baal and his followers unleash on a remote village. They recruit a Sherpa named Zark to help them pursue Baal as he moves toward his next target.

They travel across some of the most inhospitable land on earth until they confront Baal and his followers. There, Zark and Virga learn Michael’s true nature as they wage a cosmic battle that will determine the future of mankind.

For a first book, Baal was pretty darn good. As I said, it was a novel of its time when spiritual thrillers such as The Exorcist, Rosemary’s Baby, and The Omen were selling big. Despite plowing heavily trod ground, McCammon is careful to make sure his novel is not derivative of any of those religious thrillers.

As with most first novel efforts, the plot is linear. There are no subplots in play. The story is the story and it progresses from point A to point B with no deviation.

Character development is weak as well. Professor Virga’s motivation isn’t fleshed out all too well. He’s enduring the most inhospitable climates in the world and risking his life. Yet, we never get the sense that he was all that close to his missing student. His motivations after seeing his student die are not developed at all. He’s a professor of theology, but he’s no religious fanatic. His desire to kill Baal is inexplicable.

Michael is get ambiguous deliberately to disguise his true nature. However, not too long after his arrival in the story, Michael’s nature is easily discerned.

Even with these weaknesses, the book was a fun, easy read. The story was paced nicely. There were no major holes and no moments of disbelief.

It was not quite as stellar as Stephen King’s opening book, Carrie. But McCammon’s first effort is no doubt a quality book. He would later pull Baal and three other novels from publication, claiming that they were not his best efforts and he was still learning his craft. He has since relented and allowed the books to be printed.

This is a good thing. Some of the early efforts are uneven at times. But each is like Baal in that it is a solid story that has a great plot and is fun to read.

Robert McCammon would hone his craft and write some truly excellent books like Swan Song, Mine, and Speaks the Nightbird. He explores different writing genres through his career and, unlike Stephen King and other recognized masters of horror, he’s never written a bad book. That is a remarkable career accomplishment.