Dead Wake: The Last Crossing of the Lusitania By Erik Larson

Dead Wake: The Last Crossing of the Lusitania
By Erik Larson
Copyright 2015

Erik Larson once again visits the darker side of history in Dead Wake: The Last Crossing of the Lusitania. As he did with serial killer H.H. Holmes in Devil in the White City, Larson examines this watershed moment in world history from many points of view. 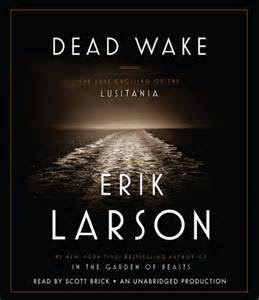 There was President Woodrow Wilson who was trying hard to keep America out of the Great War in Europe. Lusitania Captain William Thomas Turner was confident that his vessel could outrun any U-boat on the seas. U-boat Captain Walther Schwieger enjoyed hunting enemy vessels and raising litters of dogs below decks of his craft. Winston Churchill, who oversaw the operations of the British Admiralty’s Room 40 where German radio transmissions were decoded. And there were the various passengers from different walks of life – some of whom survived and some who did not.

Larson introduces to the Lusitania as she sits in berth 54 at the Cunard docks on the Hudson River in New York. There, she took on her passengers and cargo. She was delayed for almost two hours while Captain Turner provided a tour to VIPs.

Larson provides a brief history of the Lusitania and details of her construction – including the coal bins built into the hull of the ship. She was the fastest ship in the Cunard fleet but, due to war rationing, was not allowed to run with all her boilers lit in order to save coal.

The R.M.S. Lusitania set sail from New York on May 4, 1915, en route to her date with history three days later. She made 23 knots across the Atlantic. Captain Turner was aware German U-boats patrolled the coast of Great Britain, but was confident in his vessel’s ability to outrun them. One thousand two hundred and twenty-two passengers were aboard and 696 crewmen. In the cargo holds, along with tons of coal to feed the ship’s boilers, were small caliber rounds destined for the British war machine.

Larson then gives us backstories on the many passengers aboard the Lusitania. The rich and middle class and just a few poor were aboard. Each of those men, women and children would become a story of bravery, heroism, or tragedy in just a few days.

Meanwhile, Walther Schwieger’s U-Boat 20 was patrolling off the coast of Ireland. He’d sunk some smaller ships and was on his way home, low on fuel. The British Admiralty in Room 40, using the German code they had broken, was aware of Shwieger’s presence off the coast. They were also aware that the Lusitania would soon be sailing through those waters. Room 40’s commanding officer, Winston Churchill, decided to keep the information to himself.

On May 7, the Lusitania met her destiny. Schwieger could scarcely believe his luck when the large ship appeared in his periscope. Schwieger launched his torpedo which struck the Lusitania on her starboard bow. Shortly thereafter, a second explosion rocked the ship. She started going down by the head.

The crew immediately set about launching lifeboats. But the ship’s list made it all but impossible to get them launched. Making the situation worse, many of the men who would have helped with the launching of the boats were below deck at the time of the explosion and were killed instantly.

The Lusitania sunk in just 18 minutes, 11 miles off the coast of Ireland. A distress call brought local boats to the scene to pluck survivors out of the cold water. Many lives were saved because of those efforts. Meanwhile, Schwieger and his crew steamed for home.

1191 people died when the Lusitania went down. 128 of those lost were Americans. Woodrow Wilson, who had tried so hard to maintain America’s neutrality in the great war in Europe, had to take notice. While the sinking of the Lusitania did not bring America into the war, it made it much easier later, when the XYZ Telegram was discovered, for Wilson to request and receive, a declaration of war against Germany.

Erik Larson has a penchant for telling dark tales out of history and without embellishment of the facts, make them read like horror novels. Dead Wake is just a bit different. It’s a bit more history and a little less drama. Fans of his work are probably not going to like it as much as his earlier works which were much darker. However, fans of great sea disasters and naval warfare are going to rejoice in the first mainstream telling of this important tragedy in the history of naval warfare.

Larson’s books tell stories from many independent points of view that are seemingly unrelated to the central plot. He employs that device in Dead Wake as well, but to less effectiveness. Particularly the chapters dealing with Woodrow Wilson and his grief following the death of his wife and his courtship of Edith Galt were not effective in building the drama or telling the story. The book would have been better if that had been left out.

What did work well was the character sketches of the passengers who lived and died aboard the Lusitania and the biographical sketch of Captain Walker. While the lore of the legendary Titanic has made many of those lost in her sinking common names in history, very few know of those lost on the Lusitania. Granted, the Lusitania did not carry the social glitterati that was aboard the Titanic, but those lives and their stories need to be told for a full appreciation of the tragedy.

Larson’s narrative as he describes the sinking of the Lusitania is as fast paced as the events that unfolded. Titanic biographers have two hours of material with which to develop their narratives. Tales of heroism, nobility, and cowardice have time to develop. With just 18 minutes to work with, Larson grabs the reader and has him turning pages at a fever pitch.

The reader can’t read the book and not see how the British admirality was complicit in the sinking of the Lusitania. Larson does not reach that conclusion himself, but lets the reader get there on his own. Churchill knew the chances were good that U-boat 20 would encounter the Lusitania. Knowing that U-boat captains prized tonnage over all other measures of success, he knew no U-boat captain could resist sinking the Lusitania. He also knew many American and British civilians were aboard. The British admiralty issued no warnings. Churchill made sure he was out of the country when the event took place. They let events unfold hoping the outrage would bring America into the war.

Much speculation has surrounded what was in the Lusitania cargo holds and what caused that second explosion. It is common knowledge that the Lusitania was indeed ferrying war materiel to the British despite American protests that we were entirely neutral. But there was nothing in those munitions that would have triggered an explosion of the magnitude described. Many have speculated it was coal dust detonated by the torpedo. Coal was stored in a space between the ships outer and inner hull. Larson seems to poo poo that theory. His belief was that the explosion was a hot boiler hit by cold water.

Erik Larson’s Dead Wake is not the most authoritative or insightful book written on the subject of the Lusitania. However, it is the most accessible and its sales will introduce mainstream readers to the story of that ill fated Cunard liner, its passengers, and its brave captain. Books, plays and movies in great number have been dedicated to the telling of the story of the Titanic and her fate. Finally, the Lusitania will sail from the pages of history texts to the mainstream where the general public can learn of her and the tragedy of her final voyage.

Posted by Brian Schwartz at 5:48 PM