The Man in the High Castle By Philip K. Dick

The Man in the High Castle
By Philip K. Dick
Copyright 1962

The Man in the High Castle is a Hugo Award winning, alternative history novella by Philip K. Dick – a master of science fiction and alternative reality. This book explores the consequences of the Allies losing World War II and the takeover of the United States by the Nazis and the Japanese. 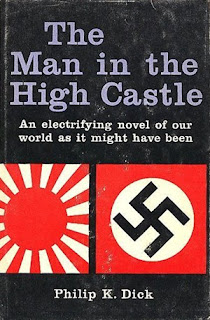 In Dick’s alternative history, President Franklin D. Roosevelt is felled by an assassin’s bullet in 1934, allowing vice president John Nance Garner to rise to the presidency. Garner’s weak government is followed by the election of Ohio senator John W. Bricker to the presidency. An ardent isolationist, Bricker delays American entry into World War II and the Axis become too strong to defeat. The Allies are defeated. Germany continues its extermination of the Jews and Japan takes over the American economy.

Japanese and German governments have an uneasy coexistence in the United States until the death of German Chancellor, Martin Bormann. Maneuvering takes place within the Nazi government to succeed Bormann and the Japanese are eager to take advantage of the power vacuum. Unfortunately, the readers are never allowed to glimpse these intrigues.

Instead, the reader learns of the lives of Japanese and German government officials living in the United States – far removed from the bastions of power. Also included in the story are various American citizens who sell American heirlooms – cherished by the Japanese, his ex wife who is a bohemian yoga instructor, a manufacturer of counterfeit American heirlooms and his business partner.


Frank Frink lives in the former U.S. disguising his Jewish heritage. After throwing a temper tantrum one day at work, he loses his job at Wyndham-Matson – a manufacturer of fake Americana. Frink sets up a fake antique jewelry manufacturing operation with his business partner, Ed McCarthy. They sell their products to Robert Childan who has several high ranking Japanese as his customers.

Frink’s ex-wife, Julianne, falls for an Italian truck driver. As do many of the characters in the novel, she is exposed to the book The Grasshopper Lies Heavy. This book is an alternative history set within Dick’s alternative history. In the book within a book, Franklin Roosevelt decides not to run after two terms and is succeeded in office by socialist economist, Rexford Tugwell. Tugwell successfully leads the country into war mobilization and defeats the Axis powers. The book is considered seditious by the Nazi and Japanese governments. Julianne is determined to join her new lover in meeting the author, Hawthorne Abendsen.

Meanwhile, Mr. Baynes travels from Europe to California to meet with Japanese trade minister Tagomi to inform him of a plot to drop a hydrogen bomb on the Japanese home islands. Joseph Goebbels's faction of the party is planning this attack as Goebbels tries to fill the Nazi power vacuum.

These two plotlines unfold until the Japanese thwart the German plan and Julianne meets Abendsen and gets him to reveal the true nature of his book.

I like Philip K. Dick a lot and this book has received much acclaim. However, I did not like it very much.

The book was terribly fragmented with many disparate plotlines running at the same time. This can be an effective story telling device as Stephen King proved in The Stand and Dean Koontz proved in Strangers. The characters in these separate plotlines need never meet or interact with each other. But the subplots should eventually coalesce into one main plot driving toward a climax. The Man in the High Castle never arrived at this singular climax.

The weak storytelling is not offset by strong characters. We get to know them some through their inner dialogue – particularly Julianne. But, typical of Dick and others of the pulp era, the characters are fleshed out only enough to make them function in the story.

The two plots would have made for two great, separate novels. Or, The Man in the High Castle would have been a good book if Dick would have found a way to link the two story lines. They had not even tangential relationship to one another.

I did enjoy Dick’s take on historical figures such as John Nance Garner, John Bricker, and Rexford Tugwell. Garner’s name is lost on almost everyone except historians. Bricker enjoyed some fame in the 1940s as Dewey’s running mate in 1944. Tugwell’s name and politics are quite obscure. Dick does not dwell on these men much, but he does represent them accurately and uses their legacies effectively.

Through these figures, Dick examines the history of the lead up to American involvement in World War II and how America almost blew it. Bricker and Garner were both isolationists – as were most people in the United States at that time. In Dick’s tale, the isolationists prevailed and kept America out of World War II until it was too late. In his book within a book, Tugwell moves the Pacific fleet out of Pearl Harbor and preserves it, allowing America much greater strength in that theater.

It is clear that the pacifist Dick believes World War II was a good war and the men who fought it were good men while those who opposed it were incompetent. This is a view shared by most historians, pacifist or not.

Dick also explores the nature of reality. What is real in our existence might not be the real reality as we learn when the source of book within a book is revealed. Many writers would have endeavored to explain this twist on reality. Dick effectively leaves it there for the reader to ponder.

This book is a must read for fans of pulp science fiction. The book and its writer are legendary. Go into it with eyes wide open. If you are looking for hard sci-fi like Do Androids Dream of Electric Sheep, you are not going to find it here. The Man in the High Castle is an alternative history that studies the effects of what could have been. There are very few sci-fi elements to be found.

Posted by Brian Schwartz at 3:07 PM