A Strange Manuscript Found in a Copper Cylinder By James DeMille

It is important to revisit the novels that serve as a foundation for all of the science fiction we enjoy today. Stories like She, A Princess of Mars, and A Strange Manuscript Found in a Copper Cylinder are the basis of today’s science fiction. In these stories, we find hilariously dated science. But we also find the wellspring of the tropes that still dominate the genre. 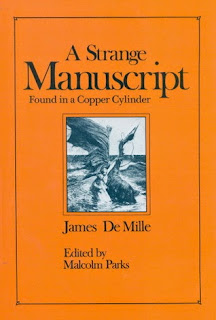 Antarctica – largely unexplored in the 19th century when A Strange Manuscript was written – provides the setting for this lost continent story. Four British sailors are caught in a lull in the wind and are trying to find a way to pass the time. One of them finds a barnacle encrusted copper cylinder floating nearby. They open it and remove the manuscript – written on material similar to ancient vellum.

The manuscript was authored by an observer of an Antarctic journey named Adam More. More and a companion went on a lifeboat excursion and became separated from the main ship. Desperate, they set aground on an island. There, they find a tribe of murderous savages that slays More’s friend. More escapes in his boat and rows for a dark cavern where he can hide safely.

He emerges from the other side of the cavern in a seeming paradise with an island covered in palm trees. He makes contact with the natives and finds them to be friendly and quite happy to see him. They seem to hate the sunlight and love death. More learns that this race of men – called the Kosedin -- worships death and poverty. They loath long life and luxuries. The gladly throw themselves at murderous creatures and the ultimate honor is to be eaten by your cannibalistic colleagues.

More is repulsed at their backward society. His life on the continent is made endurable by the presence of a young woman who is also an outsider to these lands. Soon the long Antarctic day becomes a long Antarctic night. When the long night comes, the Kosedin come out of their caves and rejoice. More learns that at the end of this long night, when the Kosedin feast before returning to their caves, that he and his beloved – as the wealthiest couple in the land – will be the main course at a celebration feast.

More and his beloved escape on a flying dragon-like creature and head for a distant island. However, their dragon is injured and they are forced into the ocean. They are rescued by the Kosedin and taken back to their land.

Once they arrive in the Kosedin homeland, Adam More and his beloved are separated and put into prison. There, More meets the leader of the Kosedin. In this upside down society, the leader is a filthy, pathetic wafe locked in a jail cell with no wealth or compansionship. He argues with this pauper who is aghast to find that More appreciates wealth and highborn status.

Finally, More and his beloved are brought together at the feast. They are to go through a separation ceremony before they are killed and spitted. AS the two stand for the separation ceremony, More makes his move, hoping to escape.

Demille’s A Strange Manuscript is one of the earliest examples of the lost world subgenre. Many credit H. Rider Haggard and King Solomon’s Mines as the earliest published example of the lost world novel. Haggard’s story was published in 1885 and Demille’s in 1888. However, it is believed that Demille started his work on A Strange Manuscript before Haggard started work on King Solomon.

The book suffers from Demille’s need for exposition on the cultural and scientific works of the Kosedin. Long exposition in fiction was common in this time period, but Demille’s contemporaries such as Haggard, Edgar Rice Burroughs, and Jules Verne structured better plots than Demille.

The long interludes of the British sailors discussing the contents of the manuscript were almost painful to read. The discussions were the stuff of pretentiousness in only which academics indulge. Demille was a college professor and although he took time to make fun of himself and others of his ilk, it did not lessen the tedium of reading these interludes. They added nothing to the story.

With this two significant weaknesses detracting from it, A Strange Manuscript was still a worthwhile read. There is some great adventure and Demille’s traditional – yet exciting climax – works well and ends abruptly which I like. The reader also finds the wellspring of some of our more modern fiction.

The found manuscript was employed often in horror and sci-fi through the years. One of the best example I can think of is Pierre Boulle’s The Planet of the Apes. In the novel which differs significantly from the movie, the story is related by two beings – later revealed to be apes – reading a ships log they recovered aboard an abandoned spacecraft. In this day and age of digital video and media, the “found footage” movies made popular by the Blair Witch Project are derivative of Demille’s work.

Demille was a professor of English at Dalhousie University in Nova Scotia. He wrote primarily romantic and historical fiction and was well known prior to the publication of A Strange Manuscript. It is a shame that Demille’s best known work was not published until after his death in 1880 because, had Demille chosen to publish this work, he’d be credited with in inventing an entirely new subgenre.

Posted by Brian Schwartz at 2:15 PM