Bethany’s Sin, Pennsylvania – and idyllic small town with a strange name. This is where Vietnam veteran Evan Reid and his wife, Kay settle for Kay’s new teaching job. Evan is a freelance writer. Their five your old daughter, Laurie, will attend preschool in the village. 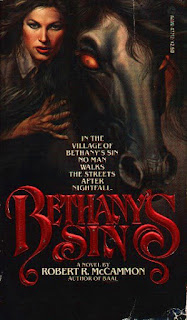 Evan is prone to have nightmares which he considers premonitions. He sees them as a symptom of post traumatic stress disorder caused by his experience in Vietnam as a prisoner of war. He does not discount his ability to foresee the future. He sees the family’s doom in Bethany’s Sin.

While grading papers at the community college where she teaches, Kay meets Dr. Kathryn Drago, a professor of history. Kay is entranced by the physically and psychologically dominating woman. She starts having nightmares of her own – nightmares where she is an ancient warrior delighting in the slaughter of her male enemies.

Evan notices that there are few males in town. Most of the men who live in Bethany’s Sin are disabled – supposedly by accident.

When the moon is new, something evil rides in Bethany’s Sin. The evil Kathryn Drago brought back from an archeological dig many years ago manifests itself in women riding on horseback, slaughtering men on the backroads of Pennsylvania. Dr. Drago sets her sights on Kay has her new recruit.

Evan has different ideas. Kay is admitted to the local clinic after supposedly having a mental breakdown and trying to kill Evan. There, she is kept in a drugged state until she can be initiated. Evan goes to war with the amazon women of Bethany’s Sin to save his wife’s life and soul.

The motive is certainly different. The men of Stepford wanted “good” wives who cooked, cleaned, and were pretty. The women of Bethany’s Sin killed for the joy of killing.

The stark difference between Levin’s novel and McCammon’s is Levin’s was blatant social commentary on male backlash against the feminism of the 1970s. McCammon’s novel was just pure fun – and fun it was.

Bethany’s Sin seldom slowed down. The plot was paced nicely. However, the characters were not well developed and the introduction was over-written.

Many authors – particularly horror novelists – use a prologue to introduce an ancient horror that is going to be resurrected in their novel. John Saul is noteworthy in his use of a prologue. It is often effective. What is not effective is a double prologue which is what McCammon writes at the beginning of Bethany’s Sin.

The first introduces the ancient evil that invades (willingly or unwillingly is never made clear) Kathryn Drago’s soul at the archeological dig back in 1965. Here, McCammon’s writing at his best – hinting at what the malevolence will be in this novel. Great.

Then there is a second prologue where Evan is in a Vietcong POW camp about to be tortured. His torturer: a woman. Her device: a spider. The intent was to introduce Evan as a mentally flawed character who was a product of torture. But it came off as silly. Evan’s flaws could have been easily woven into the story. I felt like McCammon was a lazy here.

Evan and Kay had the feel of John Saul’s characters, developed just enough, but not deeply. We know that torture and trauma are the source of Evan’s dreams and his precognition. McCammon also describes a childhood incident with his brother. There two causes for Evan’s anguish and neither are developed sufficiently to make a rich character for whom the reader will root.

Better developed, but less important to the story, is the town handyman, Neely Ames. Ames had the feel of a Stephen King character. King fully develops even his secondary characters and Neely Ames, an innocent drifter employed by the village to be exploited, was rich and sympathetic.

What appeals to me the most about Bethany’s Sin is the setting. I love stories about “that strange, little town.” John Saul conjured many strange towns. Dean Koontz, too. When Stephen King destroyed Castle Rock in Needful Things, he felt he’d visited the strange little town too often and destroyed it lest he overdo it. But some of King’s most masterful work was set in Castle Rock and Derry.

To make a strange little town story work, the author must make it plausible that the underlying evil will not be noticed by the outside world. For everything that there is to like about the movie version of Stephen King’s Children of the Corn, one can not get past the fact that somebody would have noticed a Nebraska town missing before the bodies rotted. McCammon, however, makes Bethany’s Sin work. The sheriff is employed by Kathryn Drago to keep the outside world from prying into the affairs of Bethany’s Sin. It works – and if an author can pass the test of plausibility with his strange little town story, I’m in.

Bethany’s Sin was McCammon’s second book and for many years, he would not allow it to be reprinted. Later in his career, McCammon felt his first four novels were not up to par and that he was still learning the craft of writing. That is very true. But that does not mean they are not good and should not be appreciated for what they are. Bethany’s Sin is a good book. It has flaws – a couple major ones. But it works. It is a fun read. It is an easy read. Yes, he was learning and Bethany’s Sin does not measure when compared to his later work. But reading the “condemned novels” makes fans of Robert R. McCammon appreciate his later work for the great novels they are.