Face the Music: A Life Exposed By Paul Stanley

Face the Music: A Life Exposed
By Paul Stanley
Copyright 2014

I want to say this to Paul Stanley before I start the review: As badly as you want it to be so, the current lineup of KISS is not nearly as good as the original lineup. That is why the Rock and Roll Hall of Fame didn’t want them. That is why your greatest success was in your early days. It may be easier to work with Tommy Thayer and Eric Singer because they are not equals in the band like Peter Criss and Ace Frehley were. But it being easy for you does not mean you’re making good music. 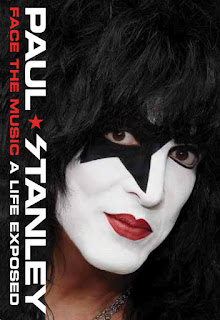 Paul Stanley is the fourth and final member of the original lineup of KISS to write his autobiography. If there is any other band with four founding members who have all written their autobiographies, I don’t know if it. But the members of KISS have a lot to say about each other and feel compelled to air their dirty laundry and their gripes about each other.

Paul Stanley – born Stanley Eisen – was born in New York and grew up in a Jewish neighborhood in Queens. Young Stanley’s upbringing was not particularly pleasant. His parents were cold and uncaring. He had an older sister who was mentally ill and terrorized the family. He was not a good student and turned to music as his life’s pursuit.

Stanley tells the story of the rise of KISS much as the others did with a few notable exceptions. He claims it was he who came up with the name KISS. The other three members all agree that it was Peter who came up with the name. Paul also claims to have designed the KISS logo. The other three agree that it was Ace who did it. It would seem that Paul Stanley is out to strip Peter Criss and Ace Frehley of any credit for any positive contribution to the band.

He spends a great deal of his time slagging Criss and Frehley. Gene Simmons, who is often regarded as the biggest horse’s ass in the band, wrote that Ace and Peter were a positive force in the band early on. Stanley says they were incompetent and destructive from the beginning.

He has a few positive things to say about Ace, but none of them were related to his musical ability. He liked Ace’s jokes. Most fans of the band generally agree that Ace was, by far, the best musician in the group. Stanley won’t give him any credit for that. Funny that nobody has ever mentioned Paul Stanley as being a great guitarist, a great songwriter, or a great anything. Paul needs to know that Ace wrote KISS’s best songs. Even Simmons acknowledged Ace’s musical ability and his desire to see Ace write more material.

He has nothing nice to say about Peter. He remarks that Peter was dumb and illiterate. That would jive with Peter Criss’s claims that, to torment him, Paul and Gene would give him spelling tests to show how dumb he was. He also claims that Peter was never a good drummer. Yet Paul was one of two who selected him to join the band. Paul Stanley doesn’t mind taking a piss on those who got him where he is.

Gene Simmons, his “brother” is not spared in Stanley’s autobiography. He often remarks about how self-centered Gene was and how Gene was prone to taking credit for the work of others. Gene often ignored the group and its needs in favor of his own. Stanley felt that he was the only one who actually cared about the group.

Gene Simmons was genuinely fond of Eric Carr who replaced Peter Criss on drums. Stanley doesn’t bitch about Carr the way he did about Criss and Frehley. But he notes that Eric Carr was tremendously insecure in his place in KISS and was subject to bouts of depression. At the end of his life, he wouldn’t talk to Paul and Paul doesn’t understand why. I would encourage Paul Stanley to examine how he treated others who came before Carr in KISS, then think back to something he might have done or said that put off Eric Carr.

Stanley is as open about his own personal hangups as Criss was in his autobiography and reveals himself as quite introspective. He shunned personal relationships and close friendships because of his upbringing. He engaged in many short term relationships and hundreds of one night stands with women but got frightened when they got too close. When he finally did marry, it was to an unsupportive, cold woman who could not give him what he needed. It would seem he’s found love the second time around.

It would seem that Paul Stanley is a proud, doting father. He writes quite a bit about his children and how much they mean to him. He was late to fatherhood, but seems to make up for it with love and devotion.

Stanley discusses in detail the highly touted KISS reunion, but his story differs from how the other three remember it. According to Simmons and Criss, Peter Criss reached out to him about attending a Criss convention. Stanley says it was KISS that reached out to Criss. Paul seems to have initially enjoyed the reunion until it was time to start making music again. Then, he discovered it wasn’t very much fun.

He says that Tommy Thayer had to teach Ace all of the music Ace wrote because he couldn’t remember the tunes. Thayer had to do the same for Criss, but Criss still couldn’t play the parts and wasn’t capable of drumming anymore.

The reunion tour was successful and everybody made lots of money. A new album was recorded, but Simmons and Stanley paid Peter to sit it out. Simmons and Stanley agree that Peter Criss could not play anymore. Criss comes close to acknowledging this in his own book, but attributes it to damage suffered in a car crash. Simmons blames it mostly on drugs. Stanley says Peter Criss always sucked.

Paul Stanley seems to be a happy man today as he enters the twilight of his career and music and one can’t help but feel happy for him. He has a wife he loves and who loves him. He has beautiful, well-adjusted children. He’s starred in a Broadway production, finally having his skills as a vocalist acknowledged. And, he is working with bandmates who he enjoys working with. Good for him.

I am a lifelong KISS fan, but abandoned the group after Criss left. Many KISS fans left after the Dynasty album, feeling the band had developed a disco feel. I abandoned it after hearing Shandi for the first time which was the single from the Unmasked album. Without Criss, it wasn’t KISS for me.

I always thought of Paul as the least interesting member of KISS. Nothing in this book changed that. While I am not a fan of Gene Simmons and his seemingly shallow personality, I think that Stanley is a bigger asshole. Simmons criticized Ace and Peter in his book and in public. But he also acknowledged their importance to the band and Ace’s musical ability. Stanley couldn’t do that. Gene never remarked on Criss’s seeming lack of intelligence or education. Paul felt the need to belittle Peter Criss at every turn.

Most great bands have internal strife. A lot of the time, it is musical differences. Sometimes, its clashing personalities. Yet, the great bands never discuss this in public. They never ridicule current or former members in public. The Who battled endlessly. Led Zeppelin had power struggles. The members of Queen used to stay mad at each other for days over small matters. But these bands stayed together because they knew that they were much better together than they were as individuals. The four original members of KISS never seemed to learn that lesson.

Of the four KISS autobiographies, Paul’s is the most introspective regarding his personal life. Ace thought that everything was one big joke. Peter blamed everything that happened to him on someone else. Gene was shallow and braggadocio. Paul is none of those things. He is aware of his personal flaws and his mistakes.

However, I could not look past the ridicule he heaped upon Peter Criss and Ace Frehley without acknowledging their contributions or musical abilities. Ace was and is a great guitarist. Paul won’t acknowledge that. Peter was a good, if not great drummer whose voice, personality, and drumming helped make KISS famous. Until Paul comes to realize this, he’ll never understand why KISS tanked after they left and will never be great again unless they come back.

Posted by Brian Schwartz at 8:47 PM