In 2011, screenwriter George Nolfi made his directorial debut in a “reimagining” of a rather dull Philip K. Dick short story, The Adjustment Team. Nolfi took Dick’s basic premise and turned it into a romantic thriller. 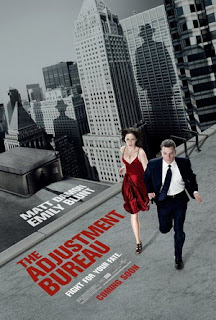 In the short story, Dick’s main character is a businessman who needs to be delayed for just a couple minutes in his arrival at work so the rest of the team can complete a major adjustment at his place of employment. The adjuster misses his appointment and the man walks in on the team doing the adjustment.

In Nolfi’s version of the story, the main character is New York congressman David Norris (played by Matt Damon), who is running for the U.S. Senate in 2006. Unfortunately for Norris, a picture of him mooning his college reunion surfaces and causes him to lose. While in a men’s room on election night, going over his concession speech, he meets Elise Sellas (played by Emily Blunt), a professional dancer. He is immediately smitten with her. The problem is, they were never supposed to meet.

In comes the Adjustment Bureau. They are going to prevent another meeting. But, the adjuster assigned to Norris misses his appointment and Norris walks in on an adjustment underway in his office where time is frozen. He is taken aside by one of the adjusters and their mission of keeping the cosmos in order and on-plan is explained to him. He is also told that he is destined not to see Sellas ever again.

Norris is not deterred and continues to pursue Sellas even though he does not know her last name or anything else about her. After riding the same bus to work for three years, Norris finally finds her and they renew their budding relationship.

However, Norris is told that he will never realize his political dreams if he stays with Sellas. He is also told that her dreams of fame as a dancer will never be realized. Despite his love for her, Norris leaves her at a hospital where she is being treated for a sprained ankle.

Three years pass without Norris seeing her. He learns that she is about to be married to a man she doesn’t love and he decides to take fate and destiny into his own hands. He finds her at the courthouse where she is about to be married and professes his love for her. They run off together, aided by a magical hat (it’s not nearly as dumb as it sounds) provided by a sympathetic adjuster. The adjusters pursue them through the various doorways in New York City that the bureau uses to move around quickly.

Finally, the pair is cornered on the roof of the Adjustment Bureau’s building. They are about to be permanently adjusted to forget each other when the sympathetic adjustor shows up with a decree from the Chairman of the Adjustment Bureau – the man who makes the plans for the cosmos. He tells them the plan has been adjusted and Norris and Sellas can live together happily ever after.

Dick’s story was pure fantasy. Nolfi’s version was a love story. Granted, Dick’s story was a short story authored for a pulp science fiction magazine that mainly appealed to pre-teen and teen males. Still, there was not much to like in the story and it was dull. Although I’m not a fan of romance movies, I have to say I like Nolfi’s story much better.

Matt Damon (one of the great actors of our generation) again rises to the occasion and delivers a fantastic performance. He is believable as the politician who has lost interest and is mailing in his speeches. His chemistry with Blunt is superb. Nolfi’s script and directing gave us a story that was romantic, but not sticky sweet.

I would also give kudos to Nolfi for all but rejecting CGI effects. There were none detectable in this movie. It would have been easy to turn Norris and Sellas’ chase through New York City into CGI eye candy. Instead, Nolfi opted for simple foot chases. Nor were there any dramatic car chases that a ham-handed director could have inserted into this script. Nolfi shows he has an eye for what works on the big screen without cheapening his product.

When one looks at movies (and now television with the broadcast premiere of The Man in the High Castle on Amazon) based on Dick’s work, it would seem that Hollywood likes Dick’s premises, but not his stories. Blade Runner, Total Recall, Minority Report, Paycheck, and The Adjustment Bureau all contain the basis of Dick’s story, but deviate far from Dick’s prose.

The result has been very good as opposed to someone like Stephen King and Ray Bradbury who have seen their work “reimagined” badly. Some very good sci-fi has been made using original concepts develop by Philip K. Dick decades ago. While The Adjustment Bureau is never going to rank with Blade Runner or Minority Report in the pantheon of great science fiction and/or fantasy, it is a worthwhile addition to Dick’s Hollywood credits.