Heir to the Empire By Timothy Zahn

Heir to the Empire
By Timothy Zahn
Copyright 1991

It was almost 10 years since The Return of the Jedi was released and seven years before the prequel was released. It would be 24 years before a sequel would be released. In between, Hugo Award winning sci-fi writer Timothy Zahn gave us an idea of what happened to Luke, Leia, Han, Chewbacca and the gang after the defeat of the empire at the Endor Moon. 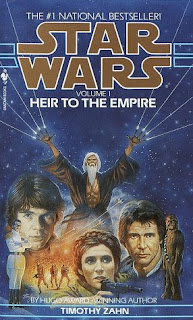 It is five years after the destruction of the second Death Star and the New Republic is trying to form a new government amid political rivalries. Han Solo is trying to recruit his old smuggler buddies to help the budding government with its shipping shortage. Leia, pregnant with twins, is assisting with setting up the new government. Luke isn’t doing much of anything except bidding goodbye to the ghost of Ben Kenobi who is finally moving on to the great beyond. Han and Leia are married and she is expecting twins.

Meanwhile, what was left of the empire after their defeat has coalesced around Grand Admiral Thrawn – a blue-skinned, red-eyed master of military tactics who was at the far reaches of the galaxy at the time of defeat. He is the complete opposite of Darth Vader. He is conversational, engaging in conversation, and much more apt to see the long game. His first move is to recruit a fabled Dark Jedi to his cause.

Before Thrawn can confront a Jedi, he must neutralize the Jedi’s access to the Force. To do this, he acquires several Ysalamiri – creatures who have the natural ability to block the Force in the immediate vicinity. The Ysalamiri are natives of the planet Myrkr which is the current home to smuggler Talon Kardde. Kardde and his new subordinate, Mara Jade, assist the Empire in gathering the dangerous predators. Kardde is doing his best to stay in favor of both sides of the war.

Luke, Leia, Han and Chewbacca undertake a diplomatic mission to the planet Bimmissaari. There, an attempt is made to kidnap Leia. Luke, sensing a disturbance in the force, decides to visit Yoda’s old home on Dagobah. There, in the cave where he met with failure in confronting his darker half, he finds a small metal cylinder. He decides to look up his old friend Lando Calrissian to see what he knows about the artifact.

After a second failed kidnap attempt on Leia, Han decides to take her to Lando’s new home planet of Nkllon where he owns a mineral mining operation. While they are there with Luke, the empire launches a brief attack and steals several of Lando’s mole miner machines. Han decides to send Leia into hiding on Chewbacca’s home planet of Kashyyyk. He and Lando go to visit Talon Kardde to recruit him for the New Republic. Luke is on his way back to the home base on Coruscant when Thrawn nearly captures him. Luke escapes, but his X-Wing fighter is crippled and he is stranded in space.

When Luke is starting to lose hope, Talon Karrde’s ship, The Wild Kardde, happens by and rescues him. Once his brought aboard, he is drugged and taken back to Myrkr where he and R2D2 are held prisoner. There, he meets Mara Jade who he finds out hates his guts and wants to kill him.

Kardde, Jade, Solo, and Calrissian are discussing Han’s offer when Thrawn arrives again. He says he needs more Ysalamiri and he asks Kardde to be on the lookout for ships for sale as the empire wants to acquire more. As Kardde and Thrawn are talking, Han and Lando are hiding in guest quarters away from the compound. Luke and Artoo make their escape and steal a small ship. Jade takes off after them. Unable to tap the Force because of the Ysalamiri, Luke crashes and Jade crashes behind him.

Luke and Jade make their way through the jungles of Myrkr. Jade reveals that she hates him so because he destroyed her world when he destroyed the Death Star. Jade was the mysterious figure known as the Hand of the Emperor and when the emperor died, she became a nobody. Jade makes it clear that she’d like to kill Luke, but does not do so out of loyalty to Kardde.

They find their way to a nearby city where Luke poses as a bounty hunter and Jade and Artoo as prisoners. Luke turns them over to the imperials when Han and Lando launch a surprise attack and free them.

Leia is on Kashyyyk and another attempt is made to kidnap her. The would-be kidnapper is a Noghri. His planet was decimated in a battle between the rebellion and the empire. After the battle, it was Darth Vader who came to his people and promised aid in their recovery and he became a revered figure to the Noghri. When the Noghri smells the scent of Darth Vader on Leia, he declares her royalty and swears allegiance. Leia asks him to take her to his home planet so that she might enlist them in her cause. First, she returns to Coruscant.

Thrawn and the empire attack the New Republic’s Sluis Van shipyard in hopes of obtaining several freighters. They deploy the mole miners they stole to disable and take the ships. Wedge Antilles and Rogue Squadron are there when the attack begins and are able to engage the empire. Han and Lando show up on the scene and Lando is able to disable the mole miners. Thrawn breaks off the attack, convinced that he can return and fight another day.

The book ends with Leia telling Han, Luke, and Lando that their ally in government, Admiral Ackbar, has been arrested by his political opponents. The fate of the nascent New Republic is in jeopardy.

Zahn can write good science fiction as evidenced by his Hugo Award. However, in Heir to the Empire, he falls into the fan fiction trap and he really loses credibility as an accomplished writer. It was painful to read Zahn recycling the cute dialogue from the Star Wars films. No catch phrase or witticism from the first three films went unrepeated by Zahn. Fan fiction writers do this because they have trouble coming up with original material. That shouldn’t be a problem for Zahn.
‘
Yes, Zahn was working with clearly established characters and fans expect those characters to speak and act in a certain manner. Star Wars fans are particularly rabid in their fandom and would be repulsed by any drastic deviation. But that is no excuse for recycling word for word the movie dialogue.

Despite working every uttered catch phrase into his dialogue and narrative, Zahn reveals his strengths as a writer. Heir to the Empire is a well plotted science fiction novel. Dispense with the Star Wars characters and insert original characters and you would still have a good, working science fiction story.

Zahn writes battle scenes quite well and in great detail. This goes for both hand to hand combat and the great campaigns such as the attack on and defense of Sluis Van. One has to believe that Zahn was able to see his plan laid out on the screen just as Thrawn did to write so vividly.

Zahn successfully captures the space opera feel of the Star Wars films. He delves deeper into the nature of the Jedi and expands the Star Wars universe with some interesting locales. Despite some unoriginal and horrid dialogue, give Zahn credit for that as well.

I remember this book and trilogy being much better than it was this time. Perhaps I’ve become more sophisticated in my reading in the last 24 years. Perhaps some of the luster has worn off the Star Wars mystique for me after the release of the prequels. Once upon a time, I rated this book quite highly. Now, I see it as quite average.

Heir to the Empire was Zahn’s first book in a trilogy. The next book, Dark Force Rising, sees the empire and the New Republic chasing a mysterious missing fleet of ships that will tilt the balance of power in their favor. I recollect the action being quite good in that book and the political intrigue gets ramped up. Perhaps the reread of the second novel will raise my appreciation of the first. We shall see.

Posted by Brian Schwartz at 1:31 PM