The Bazaar of Bad Dreams by Stephen King

The Bazaar of Bad Dreams
By Stephen King
Copyright 2015

Introduction
In between eerie opening and closing statements, Stephen King explains why he still writes short fiction. He says he has to because writing is what he does. He also enjoys and struggles with the challenge of crafting short fiction. In italics, at the end, he compares himself to a hawker at a midnight bazaar, selling his wares – his stories. 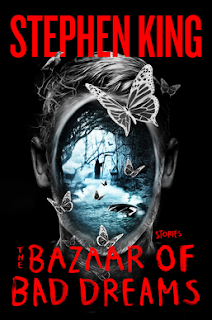 Mile 81
A muddy, unidentifiable station wagon coasts into an abandoned rest area on a Maine Interstate 95. The driver’s door opens and the car awaits its victims. One by one, it kills good Samaritans until one little boy takes matters – and magnifying glass – into his own hands.

One haunted car story should be enough for one author. Two haunted car stories are probably too many for any one author. When he gets to the third one, the trope is as dull as this story. It is not very good despite the creepiness of King’s introduction that explains the inspiration for the story.

Premium Harmony
A middle aged couple bicker on their way to Walmart. He complains about her eating and she about his smoking. She insists on stopping at a different store to buy a simple rubber ball as a gift for her nephew. She goes in alone. When he finds out she dropped dead, he just haves to laugh.

I was thinking about the dog all the way through the story and was wondering if Mr. King had forgotten. Alas, it sort of became the dark punchline for the joke. King tells us in the introduction that this story is dark humor inspired by the writing of Raymond Carver. I didn’t think it was funny or particularly interesting.

Batman and Robin have an Altercation
A man takes his father, afflicted with Alzheimers – to lunch at Applebees and a regular basis and treats him with all the dignity he can muster. One afternoon, the father recalls how he and his son went out on Halloween as Batman and Robin. On their way home from lunch, there is a car accident and an altercation. The man’s father surprises him.

This is Stephen King trying to be literary again. The story is dedicated to John Irving and I suspect King was trying to channel a little Irving in the writing. Not to my taste, but there was nothing objectionable about the story.

The Dune
A retired judge takes a canoe every day to a small island just a short distance off shore of his Florida home. Near that island is a dune where, since he was a child, that judge has been able to gain special insight into upcoming events. As he nears the end of his life, he describes the role of the dune in his life to his probate attorney.

This is reputed to be one of the better stories in the book. I thought it was acceptable, but unremarkable. There was no profound reveal, no epiphany, no shock, no twist. Nor was it particularly atmospheric or emotional.

Bad Little Kid
An attorney meets his client in a local prison. The client’s execution for shooting in cold blood a small boy. The former accountant tells his lawyer how he came to meet this “kid” in his salad days and his encounters with him over the years that led to the shooting.

So far, Bad Little Kid is the best story in the book. King always writes this first person narrative well. In short story form, it was The Man Who Could Not Shake Hands in Night Shift. In novel form, it was Dolores Claiborne. This is King doing what he does best.

A Death
A local man is tried and convicted of killing a little girl and stealing her silver dollar in an Old Western town. He is sentenced to die, all while protesting his innocence. He goes to the gallows and hangs. After his death, the solution to the mystery is revealed.

King refers to his prose in this story as “dry and laconic.” He also says he thinks of Elmore Leonard when he reads this story. He is right that the verbiage in this story is dry and sparse, but it works and it was a good story – even with the less than original solution.

The Bone Church
This is a narrative poem about a tragic voyage through a jungle that claims many lives of the expedition team through various horrific means. After all but two men have died, they arrive at a strange church and watch the parade of their dead go marching by.

I don’t know how to evaluate poetry. I don’t know good poetry from bad poetry. This was dark – as dark as any of King’s horror tales. But, like most narrative poetry, I found it hard to follow the story.

Morality
A thirty-something couple is living in Brooklyn while he works as a substitute teacher and she a nurse for a retired minister who has experienced a stroke. One day, the minister presents her with a proposition that will allow her to make $200,000 and get the bill collectors off their back. The minister wants a dalliance with sin and wants to experience it through her. She complies with ugly consequences.

It’s really a riff on Indecent Proposal. However, it is a really good riff although it could be justifiably called derivative. As he grows older, one sees King dealing with fewer monsters and more actions, reactions, relationships and consequences. This is one of those stories and it’s a pretty good one. I know I was reading at a feverish pace just to find out what the minister wanted of his nurse.

Afterlife
A man dies from cancer and enters the afterlife. There, he meets the owner of the notorious Triangle Shirtwaist Company who is serving a sentence just short of Hell in the afterlife. He finds out what comes after death.

Stephen King ponders his own mortality in this story which may or may not reflect his real life views on the subject. As a short story, it was not bad, but not too terribly thrilling either.

UR
See earlier summary and review

Herman Wouk is Still Alive
A story told from two perspectives about a fatal car crash that kills 9 people, including seven children. One perspective is that of the driver – a middle-aged woman with four children and no husband who has one a pick 3 lottery and rents a van to take her children, her best friend and her children to a neighboring city to visit their families. The other perspective is that of two aging poets who are enjoying a sunny afternoon at a turnpike rest area.

Under the Weather
An advertising executive’s wife is sick – really really sick. He tries to care for her while he goes on with his daily work routine. Meanwhile, his building superintendent is on him about getting into his apartment because of complaints of a horrible smell emanating from within.

King lets the reader reach the obvious conclusion early on without actually telling him. He is masterful in building the tension as the walls close in on the advertising executive even though the reader knows how it must all come out. A great story and a nifty bit of storytelling.

Mister Yummy
An elderly man recounts for his friend living in a retirement community how he knows he is going to die because he has scene death. Death personified is not the notorious Grim Reaper, but a 22 year old man dressed in tight shorts and a sleeveless blue t-shirt.

Again we see Stephen King pondering the nature of old age, death, and the afterlife in sobering terms. There is a beautiful and haunting allusion in this story where King refers to hanging out in gay clubs in the 1980s as the AIDS epidemic raged as similar to attending the ball in Poe’s Masque of the Red Death.

Tommy
A poem about the death of a hippie as his friends toast and celebrate his life.

I’m no judge of poetry, but this struck all the right emotional chords. Sorrow, remembrance, nostalgia, they were all there.

The Green God of Pain
An uber-wealthy man hires a faith healer to relieve him of the chronic pain afflicting him since a plane crash many years earlier. His physical therapist protests and learns a hard lesson about faith and pain.

King explores another subject with which he has become acquainted in his autumn years: pain. He explores it in a manner more akin to his youth. Great story.

That Bus is Another World
An Alabama ad executive is desperate trying to make it to a pitch at a Madison Ave. ad agency. Every conceivable delay has been thrown in his way. While sitting impatiently in a cab in traffic, he witnesses a horrific event on an adjacent bus.

Obit
A writer for an online news site finds he is gifted/cursed with the ability to kill people by writing snarky obituaries about them. He starts with his editor. He falls for an attractive coworker who puts his power to use to punish the wicked. He finds power is like heroin.

At first, I was completely willing to dismiss this story as a rehash of Word Processor of the Gods. While the story premise is juvenile (I read a story with the exact same premise in a comic book as a child), the first person narrative was so well constructed and so compelling that I ended up enjoying it a great deal. It takes a great author to take a tired, trite premise and make it work.

Drunken Fireworks
A mother-son pair of local rubes engages in an annual fireworks contest with a wealthy Italian family on the other side of the lake. Every year the fireworks get bigger and bigger until one side finally goes too far with disastrous consequences.

This story was originally published as a stand-alone novella and sold online. I’m glad I did not pay for it. It was dull with a predictable climax. It also recycled the narrative device employed in Dolores Claiborne. Perhaps the worst story in the book.

Summer Thunder
It’s post apocalyptic America and two men are surviving in rural Maine. They go about surviving as more and more of the animals die around them. Finally, both confront the reality that the end has come. Each faces it in their own way.

I am a sucker for the post-apocalypse and this story has just the right amount of despair and hopelessness.

Posted by Brian Schwartz at 2:38 PM