Robots of Dawn By Isaac Asimov

After a nearly 30 year hiatus, Isaac Asimov resumed writing his Robots novels and picked up the story of Plainclothesman Elijah Baley and his sidekick, Robot Daneel Olivaw. 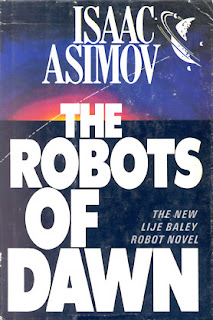 Baley has returned to Earth from Solaria and, with his son, is learning to overcome his agoraphobia by spending time outside in Earth’s atmosphere. As he is practicing the fine art of gardening, a message arrives. He reports to his superior who tells him he has been summoned to the Spacer world of Aurora.

He learns that Daneel’s creator, Han Fastolfe, has been accused of destroying a robot, Jander Panell. Panell was a humanform robot identical to Daneel. Jander was destroyed by someone who was an expert with robots and Fastolfe is Aurora’s foremost expert. Baley is to clear Fastolfe’s name if at all possible.

It is important that Fastolfe be cleared because he leads a faction of spacers that favors allowing Earth to colonize other planets. This excites Baley because he is eager for the people of Earth, who are second class citizens in the galaxy, to branch out to new worlds of his own.

When he arrives on Auroroa, he finds his old friend, Gladia Delmare whom he first met as the widow of the murder victim on Solaria. She has immigrated to Aurora after finding Solaria’s culture of little, if any, human intervention too confining. While Fastolfe was Jander’s owner, he stayed with Gladia. Gladia reveals that she and Jander had a sexual relationship and that she regarded him as her husband which is a major violation of Auroran mores.

Baley, Daneel, and Robot Giskard Reventlov – a conventional robot owned by Fastolfe – travel to the Auroran Robotics Institute to talk to Fastolfe’s estranged daughter, Vasilia, who is an expert in robotics in her own right. Vasilia believes her father guilty, saying that he had the expertise and possibly the motive. Fastolfe was completely and totally dedicated to the creation and study of humanform robots – even to the point where he used his own daughter in his experiments.

Vasilia’s statement indicates another possible suspect in Santirix Gremionis, a hair dresser who works on the Robotics Institute grounds. Satirix was first infatuated with Vasilia. But, desiring him to leave her alone, Vasilia introduced him to Gladia to whom she bore a resemblance. Satirix developed an infatuation with Gladia and offered himself to her several times sexually and was rebuffed. Baley comes to believe that jealousy could be a strong motive.

After questioning Satirix, Baley comes to understand that he lacks the expertise in robots, but he is clearly infatuated with Gladia. He did not know of the sexual relationship.

Baley’s final interview of the day is Kelden Amadiro. Baley is not hopeful because, besides Fastolfe, Amadiro is the foremost expert in robotics on Aurora and not even he has the understanding of the humanform robot to have scrambled Jander’s brain the way he did.

Baley finds Amadiro to be exceptionally arrogant and condescending. Amadiro is the leader of the faction that would reserve new worlds to the spacers and confine inferior earthmen to their home planet. His aim is to create humanform robots to go ahead to new worlds and construct societies that are ready made for spacers to move into. But, so far, he has not created a humanform robot. Amadiro has motive to kill Jander. He would want to sabotage Fastolfe politically so that his movement would be discredited. He would want to discredit Fastolfe professionally as well.

Amadiro makes it clear that he resents the questions and resents Baley’s presence on Aurora. He plans to appeal to Aurora’s commissioner who oversees the government. He wants Baley’s investigation ended and Baley removed from the Aurora immediately. Still, Amadiro is eager for Baley, Daneel, and Giskard to tour his facility. Baley begs off and heads for home.

Enroute home, the vehicle in which the trio is traveling experiences mechanical failure and breaks down during a severe electrical storm. Giskard, who is piloting the vehicle, suspects it is sabotage. The storm out in the open causes Baley to have a panic attack. But it dawns on him the sabotage occurred at the institute and the reason for the sabotage was so Daneel – the world’s only remaining human form robot could be captured. He orders Giskard and Daneel to flee into the storm to avoid capture.

Baley wakes up in Gladia’s home, having been rescued by Giskard and Gladia. Daneel is safe within Gladia’s home as well. Baley recuperates and prepares for his confrontation with Amadiro before the planet’s commissioner.

The day after Baley’s recovery, the commissioner convenes a hearing to hear evidence in Amadiro’s claim of slander against Baley for implying and directly accusing him of being the saboteur and killer of the robot Jander. While the commissioner is disposed against Baley because Baley is an earthman, Baley is able to make his case against Amadiro. Fastolfe’s reputation is restored and Amadiro’s is damaged. The situation is hopeful for the future of earthmen’s expansion into space.

As Baley is preparing to leave, he is paid a visit by Giskard whom he has come to regard with almost as much affection as he has for Daneel. There has been a problem niggling at the back of Baley’s mind since his arrival on Aurora. After talking with Giskard, he learns that Giskard is telepathic and able to alter the thoughts of men and robots – albeit within the Three Laws of Robotics.

Baley bids goodbye to Gladia, telling her that she and Santirix Gremionis should marry and set a precedent and example for the people of Aurora to end the culture of sexual promiscuity and create a culture of mutual respect between marital partners.

Well, the difference in the cultures of when Asimov started the Robots series and when he resumed it is quite apparent. Sex is alluded to in the 1950s era stories and the allusion is quite veiled. In this 1983 story, Baley and Gladia have a quite unabashed discussion of sex, orgasms, sex toys, and sex positions. Such a thing would have been scandalous in the 1950s when the genre was enjoyed primarily by pre-adolescent and adolescent boys.

Another major difference which is most likely a product of a different decade is the length. With the young audience of the 1950s, science fiction books were much shorter. Also, given that Asimov was a working pulp writer when the first Robots novels were published, he wrote shorter stories out of habit. Pulp editors demanded lean prose because column inches were money. The quicker you moved your story along, the better

In the 1980s, Asimov was no longer operating under those culturally imposed restrictions. Readers of science fiction were older and more sophisticated. There was room allowed for solid character development, subplots, and descriptive passages.

As a mystery, This Robot book reads pretty much as all the others. One suspect after another is interviewed. There is one red herring and the reveal is made in a dramatic disclosure in a group setting. It is all pretty elementary stuff. The identity of the criminal was quite evident and secondary – perhaps by design. It was the mystery of Baley’s dream and Giskard’s relationship to it that was the big surprise.

As science fiction, it functions on a higher level. The robots as characters are developed more than ever before as is the relationship between Daneel and Baley. The plans for planetary expansion and the coming competition between Earth and her spacer rivals is developed and set up for the sequel, Robots and Empire. The Robots of Dawn is a much better science fiction novel than it is a mystery.

While I love Asimov as a writer and a highly creative person, I enjoy the shorter works more. Asimov was famous for his lean prose in his early days and I think it worked well for him. The early Robots novels and the early Foundation novels are more highly regarded than their later works. Writing taut, well paced stories is a challenge and Asimov rose to it like few could. While I enjoyed this book and am hoping to enjoy the sequel, I feel like something got lost in the intervening 30 years.