New Introduction by Harlan Ellison
Ellison engages in a bit of self-congratulation in describing the success of the “vivisected” Dangerous Visions, of which this is the third volume. He says that he’s been working on a new volume to be titled Again, Dangerous Visions. He lists the new writers with breathless excitement. 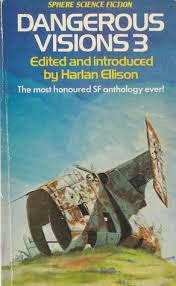 I thought Sturgeon had a perfectly good short story going here until he brought it to an abrupt halt with an argument as to why incest should not be socially taboo. Then it got really boring and not a little repulsive.

What Happened to Auguste Clarot by Larry Eisenberg
A dogged reporter investigates the disappearance of a world renowned French chemist. When he eventually locates the chemist, he learns that he has used his knowledge and expertise to develop an entirely new means of supporting himself.

Some of the stories in this book I have not enjoyed for one reason or another. None of them left me thinking, so what? Until now.

Ersatz by Henry Slesar
A man in a post-apocalyptic war searches for an aid station where he might get some food and sleep. He finally finds one, attended by a man and young woman. He seeks comfort from the woman and gets more than he bargained for.

An absolutely pointless story which had the science fiction angle as something completely gratuitous. The twist is almost as old as sex itself which made for a thoroughly boring read.

Go, Go, Go, said the Bird by Sonya Dorman
In a dystopian society, a woman flees from pursuers who would eat her to stave off famine. As she runs, she reminisces about being a powerful leader in her tribe.

This one had a pretty good twist. And, who can’t help but like a story set in a cannibalistic dystopia?

The Happy Breed by John T. Sladek
In the late 1980s, the world and its population are controlled by a supercomputer that has removed all danger, all risk, and all excitement from life. Slowly, with the help of the computer, the world’s inhabitants regress to a near infantile intelligence and existence.

This is a powerful story that is as pertinent and relevant today as it was nearly 50 years ago. As our government and society strive to reduce dangerous behavior, control our diet, and remove danger and risk from our lives, they reduce our humanity.

Encounter with a Hick by Jonathan Brand
Is God the moral standard of the universe just because he created it? A space hippy encounters and unsophisticated traveler who claims to be all powerful.

The dialogue in this story hurt the eyes to read and the author tried too hard to be controversial and not hard enough to construct a meaningful plot. Dangerous? No. Annoying? Yes.

From the Government Printing Office by Kris Neville
A three year old feels mistreated by his parents who are raising him based on an instruction manual from the government that explains how to raise a future scientist.

This story started out very weak with no seeming rhyme or reason. When it becomes apparent that the storyteller is narrating the scattered thoughts of a three year old, it works.

Land of the Great Horses by R.A. Lafferty
Whatever happened to the homeland of the Romany? It is revealed when that small sliver of earth is returned by the aliens who took it for examination. They claim a new piece of land to study and create a new type of Gypsy.

This one started out very difficult to follow and seemingly without purpose or reason. But, as it gathered steam and the direction the author was headed became clear, it was quite interesting and quite clever.

The Recognition by J.G. Ballard
A strange circus comes to town and sets up in a remote, desolate part of town. It is operated by a dwarf and an ageless woman. A young man slips in to see the exhibits and finds the cages empty except for a familiar odor. Later, when a few obnoxious sailors stop by, they learn the true nature of the circus and its exhibits.

This story was wonderfully atmospheric, but a little short on plot. Darker than that most famous of haunted circus stories, Something Wicked This Way Comes, it lacks the compelling narrative.

Judas by John Brunner
A man enters a church and asks to speak to God himself. He is recognized as a former priest of this temple. A priest tries to restrain him and he kills him. He then goes to meet God – the God he created and the God he intends to destroy.

I initially thought this was a negative riff on Christianity and the story of Christ’s crucifixion and rebirth. But it seems to be a commentary on man’s reliance upon machinery to carry out daily tasks and man’s increasing dependence upon it.

Test to Destruction by Keith Laumer
A man undergoing interrogation is unknowingly tested by aliens who want to assess mankind’s mental stability. However, he turns the table on them and becomes the ultimate power in the universe.

What intelligent, insightful, and brilliantly written science fiction this story was! Laumer shows that you can

Carcinoma Angels by Norman Spinrad
A self-made billionaire who has never met a challenge he could not conquer learns that he has cancer. The cancer is deemed terminal. He will not accept that answer and sets out to cure or remove his own disease.

This story was written in a different time when most forms of cancer were death sentences. To get a cancer diagnosis instilled terror in the heart. However, Spinrad approaches the subject as a dark comedy and delivers a mildly funny, but exceptionally well-paced story that was a pleasure to read.

Auto-Da-Fe by Roger Zelazny
In the future, matadors will be replaced by mechanadors who do battle not with bulls, but with cars. The best mechanador of them all takes on a host of Buicks, Fords, and Pontiacs.

A surprisingly old sci-fi trope of taking something old and replacing it with something new or fictional works well in Zelazy’s tale.

Aye, and of Gomorrah by Samuel R. Delany
This is a story about Spacers who are eunuchs who work in space to repair satellites and equipment. Felks are the sexually deviant earth inhabitants that lust for Spacers. A spacer encounters a Felk in Instanbul who cannot pay him for his services. But it is not money that he wants.

I thought this was a rather vanilla tale with which to wrap up this anthology. I read with some anticipation to find out what a Spacer and a Felk were. Once I found out about halfway through the story, I lost interest.