Robots and Empire By Isaac Asimov

Thirty years after embarking upon of the series of books that would define him as one of the grand masters of science fiction, Isaac Asimov completed the Robots series with Robots and Empire. He linked the worlds of R. Daneel Olivaw and R. Giskard Rentelov to that of Hari Seldon, the master of the world that will become the basis for his Foundation series. 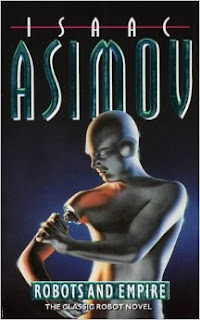 In writing this bridge novel, he also wrote the finest book in a fantastic series which embodies so much of what makes good science fiction.

It has been 200 years since Elijah Baley died and Earth has since used his example to spread their population beyond Earth to other planets. The “Settlers” have expanded in the universe while the Spacers have become sedentary.

Still living after all these decades is Gladia Delmarre, native of the Spacer world, Solaria and resident of Aurora who was briefly Bailey’s lover. She is still accompanied by robots R. Daneel Olivaw and R. Giskard Reventlov. Gladia is visited one afternoon by Daneel Giskard Baley, a descendant of Elijah Baley. He informs her that her former home planet of Solaria has mysteriously been abandoned. But somebody or something has been destroying Settler ships that have attempted landing there. Baley wants Gladia to accompany him to Solaria to investigate.

Also still living is Baley’s old nemesis, Kelden Amadiro, who still hates Earth people with a passion. He takes on a new apprentice, Levular Mandamus, who is a descendent of Elijah Baley and Gladia. Together, they aspire to manipulate the Three Laws of Robotics and robots themselves to destroy Earth.

Traveling to Solaria, they find it abandoned save for some robots who are inclined to kill D.G. and his crew. Only Daneel’s intervention saves them. Puzzled as to how and why robots would want to kill humans, D.G., Gladia, and the robots return to Aurora.

While on Aurora, an attempt is made to abduct Daneel by Vasilia Aliena, roboticist and daughter of Daneel’s creator, the late Dr. Hans Fastoff. Daneel uses his telepathy to thwart the attack and the whole group takes off in D.G.’s spaceship. They travel to D.G.’s home planet and later Earth and Gladia emerges as a leader of a movement to prevent war between Spacers and Settlers.

Meanwhile, Mandamus and Amadiro travel to Earth to destroy it and precipitate a war between Settlers and Spacers. They set up shop at Three Mile Island. Daneel and Giskard deduce that plot and travel there to intervene. To stop the evil plan, Giskard uses his telepathy to alter Amadiro’s mind. In the process, he fatally injures himself.

Mandamus says that while Amadiro sought immediate destruction of Earth, he envisioned a slow poisoning of the Earth’s surface with radiation. Believing that just such an occurrence would push man into space and help him grow, Daneel allows Mandamus to proceed with his plan.

As he lays dying, Giskard passes along his telepathic abilities to Daneel, hoping that he will be able to make use of them in promoting peace and the advancement of mankind.

Of all the Robot novels, I liked Robots and Empire the best. It was the only one that was not a detective story.

While the mysteries were interesting and the Baley character fascinating, the lone novel to not include him was much grander and epic in scale and much more a real science fiction novel. It also allowed for more discussion, debate, logical reasoning, analysis of morality, and other philosophical ponderings.

These discussions between Daneel and Giskard usually happened near the end of a chapter and served as an excellent narrative device as well as providing a degree of foreshadowing that made the story flow quite nicely.

For all of the animosity that Mandamus and Amadiro held for Earth and Settlers, motivation could have been fleshed out just a little more. While the events of Robots of Dawn set the stage for Amadiro’s hatred of all things related to Earth, it did not provide enough material to create the raw hatred that leads to a desire to destroy an entire race of people.

Asimov wrote Robots and Empire to serve as a bridge to his Galactic Empire novels which eventually lead to his monumental Foundation series. I had planned on reading Foundation next, having read it many years ago. Instead, I will tackle the Galactic Empire next.

Asimov stands at the pinnacle of science fiction giants and his Robots series is one reason why. Asimov blends just the right combination of science fact, speculative fiction, fantasy, and humanity to weave his tale. Although his robots are creatures of his imagination, they embody a great deal of humanity.

Posted by Brian Schwartz at 2:33 PM