Girl of My Dreams
An extortionist uses his girlfriend’s precognition to extort money from the loved ones of people who are going to die. For the right sum, the man will provide the time and location of the accident so it can be avoided. But the man is getting tired of the weepy girl and is going to make a break from her after one last job. 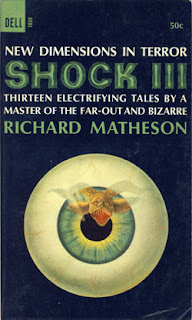 Typical Matheson prose – tight and taut. Does anybody know better than Matheson how to pace a story and develop a character with fewer words? I love the guy!

‘Tis the Season to be Jelly
A family contemplates and discusses the marriage of one of their own in a world where their bodies are breaking down and deteriorating because of nuclear fallout.

This story was lackluster. Sometimes, writing phonetically and in a hillbilly patois is effective. Matheson misses the mark in this attempt – and misses it badly.

Return
A scientist travels ahead in time 500 years in a time machine, promising his wife he will return in time for dinner. When he gets there, he is told he is of that time and cannot return. But his wife can be brought forward for a limited time. He struggles to return anyway.

This is the kind of story that makes me love science fiction. No fancy literary props. No hidden message or subtext. Just a well told story full of action and emotion. Matheson is the king!

The Jazz Machine
A black jazz musician learns that a white guy in his audience has developed a machine that can take the music of a jazz musician and put words to describe the emotions behind it. The musician is disturbed and appalled.

I liked the clipped narrative and dialogue in this story. It was way too heavy on the phonetic dialogue for my tastes. Matheson’s love of jazz is clearly reflected in this story.

The Disinheritors
A married couple drives off into the woods to have a picnic. After a large meal, she wants to walk. He wants to take a nap. She wanders off and finds herself living out the story of Goldilocks and the Three Bears. Part of her disbelieves she is actually living a fairy tale. Another part of her seems to be ordering her to live the fairy tale.

This story had the feel of a young reader story. It was told like a story teller would tell a story to children – without dialogue and a steady rhythm of “this happened, then this happened, then she thought this.” The twist had a childlike feel and the last sentence was the capper that screamed for ages eight and up.

Slaughter House
A pair of fussy brothers move into a house haunted by the evil spirit of the former resident whose picture hangs over the mantle. Each in his own turn falls for the lusty succubus and turns on the other. The story is revealed through a manuscript mailed to a newspaper.

It’s interesting how Matheson can take all the worn out haunted house tropes and weave them into a story that is interesting and compelling reading. The main characters are brothers, but one can’t help but feel the homosexual overtones in the narrative. The two brothers react to each other’s feelings and emotions like lovers.

Shock Wave
A church organist tries to convince the lay leader that something is wrong with their immense pipe organ. It seems the organ does not want to be replaced and when it goes, it intends to take a few people with it.

How can you not love a haunted organ story? It’s not as tongue in cheek as the description might make it seem.

When the Walker Sleeps
A space hero must defeat aliens who threaten his planet’s power supply and defend a young, pretty nurse who is to see to his health.

Sound like a science fiction cliché? It is supposed to be. Matheson twists it in the end quite effectively. Most of the story is told in a second person narrative, which can make reading it difficult and the prose unwieldy. Again, all is revealed in the twist.

Witch War
Pre-adolescent girls with the powers of telekinesis are deployed as weapons in a war. They engage the enemy with no sense of right or wrong, sympathy, or empathy.

Today, the story would be considered sexist given the stereotypical dialogue employed by Matheson for the young girls. Perhaps it was social commentary on the amorality of teenagers or perhaps just teenage girls. It was a creepy story given the helplessness of the targets.

First Anniversary
As he celebrates his first anniversary with his wife, a man loses the ability to smell and taste his wife. He is perplexed, frightened, and sad. He sees a doctor who tries to help him psychologically. But one evening at home, he discovers the truth while still trying to convince himself that the problem lies within himself.

This story was not as risqué as it might sound in my summary and has the creepy ending that would have made it suitable juvenilia or comic book fare.

Miss Stardust
A public relations man is brought on board to promote a beauty contest that advertises itself as crowning the most beautiful woman in the universe. But when aliens arrive from other planets demanding their women be exhibited and judged, the whole event becomes complicated.

I am never too pleased when Matheson tries to engage in dark humor. It usually doesn’t work for me and falls flat. In this case, the trope is long worn out and probably was when Matheson wrote this story back in the 1950s. The humor might have worked if his descriptions of his various aliens weren’t so silly.

Full Circle
A newspaper writer is dispatched to attend and review a play put on by Martian performers. As he watches the show, the reporter is intrigued with the actor who plays Rip Van Winkle. He goes backstage to meet him and finds a man full of bitterness and anger at what Earth people have done to his planet and his race.

This story’s subtext was paper thin and time has dated its subversive intent and social commentary. Still, Matheson does capture the raw emotion American blacks must have felt – particularly entertainers – at being good enough to entertain white audiences and not good enough to be societal equals with whites.

Nightmare at 20,000 Feet
A man riding in a plane notices a creature on the wing determined to damage the aircraft’s engines. He alerts the stewardess, to no avail. The creature hides from everyone but him. Wilson is desperate to alert someone – anyone – as to the creature and the danger he presents.

I’ve always loved the Twilight Zone episode based on this story. Frankly, I enjoy it just a little more than the short story itself. Perhaps that is because I’ve seen the show so many times, any anticipation of the climax has been diminished.