It’s the age of disco -- or at least its waning days. America is held hostage and international tension is at an all-time high. None of this touches the small, upscale village of Millburn, New York which retains the charm of New England in the era of Carter. The Chowder Society – a group of five aging professionals – is the center of the small village’s social scene. 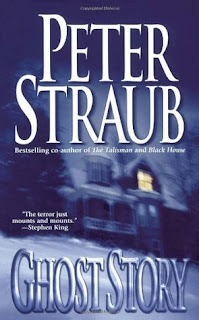 The story opens with a bit of a prologue of a young man in bed with a young woman in an upstairs hotel room. The man awakens to find himself in bed with a monster. When he tries to escape, he falls from a window to his death.

Flash forward a couple years. The Chowder Society is meeting sans one of their members. Mr. Wanderley has been dead almost a year. He died at a party held in the honor of a young actress being squired by Wandereley as he was ghost writing her biography. The Chowder Society is haunted by a nightmare they all share, but refuse to discuss. Instead, Sears James decides to invite Wanderley’s nephew – the brother of the man in the opening scene – who is an occult writer – to come to town and help the old men explain their dilemma.

Meanwhile, James and Hawthorne need to respond to the complaints of a regular complaining client who lives out on a farm. They arrive with the sheriff and find the man’s livestock all dead. What is strange is that all of the animals have their throats cut, but there is no blood present. The sheriff (an itinerant drunk) points out that the event is not uncommon. He’s learned through various law enforcement conferences that the same events have transpired all over the country in various locations at various times. The farmer promises to be extra vigilant in keeping an eye on his existing livestock to capture the predator.

Later that night, the Chowder Society convenes with bourbon, cigars, and James regales the group with a tale – supposedly true. He talks of his early days of teaching in a small New England town. The town was poor and the accommodations he lived in frugal beyond description. He teaches his charges of all age levels. One day, he notices a boy who is determined to argue whether or not the earth is flat or round. He will not hear reason. His name is Fenny Bate and the other kids shun him. When James asks the boy where he learned this misinformation, he says he heard it from Gregory, presumably his brother.

James takes to the woods to find the shack where the Bates live. He finally finds Fenny and his sister. Off in the distance projecting an air of malevolence, is Gregory. James tries to reason with the kids. But he sees the abject poverty in which they live and realizes the social circumstances of the town and finally gives up. He sees Gregory watching the kids and the school from afar and asks some of the other kids about Gregory. They say that Gregory used to do repairs on the school, but one day, Fenny and his sister pushed over a ladder he was on, killing Gregory.

James decides to keep Fenny and his sister after school to teach them. Gregory shows up and Fenny gets real scared and agitated. Fenny eventually dies there on the spot. He is put in an unmarked grave beside his brother and James is left haunted. He finished out the school year before returning to Milburne.

As scary and creepy as that story was, the members of the Chowder Society know a scarier and creepier story. It was a story they lived together 50 years earlier. James fears it may be the source of all their ills.

As the group grows more wary of the dreams haunting them, they each tell a tale of being haunted or terrified by a supernatural being. Lewis Benedikt’s wife was driven to suicide by something she saw in a hotel room. Wanderley died of an apparent heart attack and the young actress he was squiring disappeared from the face of the earth. Even Don Wanderley – Edward Wanderley’s nephew – has an encounter with a young woman and his brother dies after stealing her away.

After comparing notes, the group notices that their fem fatales all have the same initials: A.M. What worries Don Wanderley – summoned because of his knowledge of the supernatural – is that James and Hawthorne have a new secretary and her name is Alma Mobley.

Finally, after Benedikt dies mysteriously, the town bad boy disappears, and others come up missing or dead, Hawthorne and James decide it is time they told Don Wanderley the story of Eva Galli.

Galli was a young woman who moved to town in the 1920s and immediately charmed the young members of the Chowder Society just as they were starting their professional lives. The boys, sexually immature and naïve, keep the relationship purely platonic, just enjoying her company. She is engaged to a local man. When that man breaks it off, she invites the Society to her home. There, she becomes sexually aggressive with Benedikt who is appalled by her behavior. She bites and slaps him and when they try to restrain her, she falls and hits her head on a brick hearth. She is apparently dead.

The young men panic and decide to borrow a car to get help. Instead, they decide to place Galli’s body in the back seat and submerge it in a local quarry. As they car slips into the depths, Galli sits up and smiles at the boys through the back window. They are stricken with terror.

Now, the horrors of their past – Eva Galli/Anna Mobley and the Bate brothers – have come back to torment and kill them. Mobley reveals to them that the three are part of a race much older than humanity. They are the source of all of mankind’s tales of the supernatural. They are long-lived and they are evil.

As the holidays come and pass, Milburne is snowed in and isolated from the world. The jail is converted into a morgue for the victims of the supernatural terror. James, Hawthorne, Don Wanderley, and a young boy set out to hunt down and kill the creatures once and for all. Eventually, Don Wanderley is left to capture the creature in the form of a young girl and send her to her final reward.

This was a selection of my monthly book club and was recommended by yours truly. I had not read it before and knew it had a stellar reputation among fans of horror fiction. After having read it, I understand why. It generated the most intense and enjoyable discussion my book club has had in its eight year existence.

The characters in this book were wonderful. One can imagine these patrician souls, living their patrician lives, and enjoying their patrician luxuries. Sears James – whose very name screams patrician – is particularly well developed. He is the group skeptic, to patrician and set in the logic of his elder years to believe what is happening to him despite his experience with the Bate family.

The creatures – Mobley and the Bate brothers – were fascinating. Straub told Stephen King that he read all of the old American masters like Lovecraft, Poe, and Hawthorne before writing Ghost Story. In his creatures, he combines all the tropes of haunting into one creature and provides a rationale for their existence. Then he hints a Lovecraft’s Old Ones – an evil race older than mankind itself.

One of the important elements of horror fiction is isolation. Isolation can take many forms. It can be emotional, geographical, or racial. In Ghost Story, Straub employs the oft-used trope of the snowstorm to cut off the town from civilization. Then, he ramps it up just a bit more. As more and more people die in the town, the citizens isolate themselves from each other. There is no authority. The sheriff – a drunken halfwit – is a non-factor. The Chowder Society is very much on its own in confronting Mobley and her minions.

Straub throws the reader for a loop by starting his story at the end with the prologue. Several members of our group were thrown by Straub’s prologue. Some remarked that the first few chapters seemed to remotely detached from the prologue that the story was not making sense to them. Ghost Story does require some patience to read. It builds slowly then races forward. It all eventually makes sense and makes the whole reading experience of this novel worthwhile.

In our discussion of the creature, one member pointed out that perhaps the initials of the women the creature used were all A.M. He added that it might be Alpha and Omega – the beginning and the end. Little nuances like this made the book such a fascinating club story.

There is a subtext in Ghost Story. Although is a resident of England, Straub is very much an American writer. Remember when this novel was written and published. The 1970s were winding down. It was a decade of social and political upheaval in the United States. There was a longing to return to “traditional values.” In a Rockwellian America, what is more wholesome and American than small town New England?

Straub deconstructs this myth. Behind the scenes of this portrait of small town America is a Peyton Place. There is drunkenness, corruption, and lots and lots of adultery. What better place for evil to show its face than a location putting up the façade of wholesomeness?

Ghost Story is ranked number 15 in the Goodreads poll of great horror novels. That puts in some distinguished company like King’s master works The Shining and IT. It closely resembles another of King’s most heralded work, Salem’s Lot. I found it to be superior. King was in your face with his cynicism regarding small town America. Straub is much more subtle. Also missing from Salem’s Lot was a sense of isolation. Like any good horror novel, Ghost Story made the reader feel just a wee bit claustrophobic.

Posted by Brian Schwartz at 5:31 PM