Snowsong by Nancy Varian Berberick
Tanis, Sturm, Flint, and Tasslehoff are returning from a mission when they are snowbound on a mountain. They find a meager shelter and Tanis and Sturm go out to hunt firewood. They get lost and are attacked by wolves. Meanwhile, Tas annoys Flint to no end trying to coax music from an old recorder given to him. Suddenly, Tas “finds the music” in the recorder and his song calls to the creatures stuck in the storm and invites them to the refuge. Tanis and Sturm, who have given up and are resigned to dying, hear the song as well. 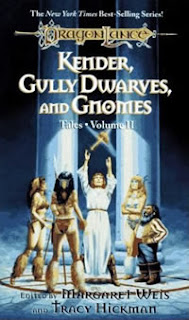 I do not ordinarily like characters like Tasslehoff Burrfoot. I generally like my fantasy fiction heavy and without the comic relief. Tas is an exception. I love the character Weiss and Hickman created and the light comedy he brings to their tales. Berberick captures the Weiss and Hickman characters and humor wonderfully and tells a serious tale with light, comedic breaks without being silly. I’ve not read any of Berberick’s Dragonlance fiction. But I have to believe it is up to par judging by the way she stayed true to characters not of her making.

The Wizard’s Spectacles by Morris Simon
The elf, Dalamar, who will go on to be Raistlin’s apprentice, flees to a dwarf’s mine to hide from Sylvanesti pursuers. He brings with him a box of scrolls and spectacles made of gems of true seeing. When Dalamar is abducted, the dwarf begins using the glasses to read the scrolls to smite his enemies and impress his friends.

This story worked well. An old gaming cliché is to use the fireball spell for amusement and it was just as tiresome here. But the characters were well developed and the plot moved along nicely.


The Storyteller by Barbara Siegel and Scott Siegel
A story teller is arrested by the local dragon lord for telling stories that bring together humans, kender, and dwarves. He tells his cellmate his story then relates to the reader how the races came together again to rescue him.

Starts out sort of light. Then it develops into your typical fantasy combat tale. But the end made the whole story worthwhile reading. This is one of the best short story entries in the Dragonlance canon.

A Shaggy Dog’s Tale by Danny Peary
Tasslehoff Burfoot tells a group of children about Gorath, a general in the Dragon Lord’s army and his lust for revenge against a woman who escaped slavery and her warrior boyfriend. Gorath confronts them in the clearing and begins his assault. But that assault is interrupted by a shaggy dog with a lust of his own.

A children’s tale told to fictional children is what this is. Children’s tales are usually written with dialogue that contains perfect grammar. This can be – and is – annoying for the adult reader. Not the kind of fantasy fare I enjoy, but a worthwhile tale for children.

Lord Toede’s Disastrous Hunt by Harold Bakst
Lord Toede, former Dragon Lord of Solace goes hunting for game. Instead, a pair of Kender arrange for him to meet a much more fearsome creature.

I continue to admire the way the Dragonlance contributors can keep the Kender entertaining without making them silly. I don’t like silly fantasy.

Definitions of Honor by Richard A. Knaack
A Knight of Solamnia travels to a remote fishing village to lay waste to a Minotaur that is terrifying villagers. He confronts the Minotaur, prepared for battle, when the member of a fierce and proud race instead engages him in a conversation about pride, honor, and dignity and how one achieves them.

Not nearly as boring as perhaps I made it seem. Still, it was a little light on action and quite heavy on philosophy.

Hearth Cat and Winter Wren by Nancy Varian Berberick
A cat and wren inhabit the house of an evil magic user. But they are not what they seem to be. The wren flies off to get help while a caged squirrel ponders his future of escaping and getting eaten by the cat or living out his life in a cage.

The author constructed this story nicely in that we are not led by the nose to the hook. Again, Berberick makes good use of the Dragonlance characters and keeps them true to form. A nicely done story.

Wanna Bet by Margaret Weiss and Tracy Hickman
Caramon and Tika’s sons – two fighters and a magic user lose a drinking contest to a dwarf. They find themselves shanghaied on a Gnomish ship with the dwarf. He has recruited them to find a lost jewel legendary to the dwarfs. They arrive on the island where the jewel is secreted away and find the natives dispirited by the loss of all their women. They press on to the castle where the jewel is located and find themselves bewitched by its siren song.

This story had wonderful character development. But the story was a bit of a cliché and the climax fairly predictable. The creators of Dragonlance certainly could have contributed a more worthwhile story to the collection.

Into the Heart of the Story by Michael Williams
A gnome sets the record straight regarding the role and important part the race played in the War of the Lance.

This story was unreadable. Foolish footnotes, lousy poetry. Not worth the effort to read and therefore, I didn’t finish it.

Dagger Flight by Nick O’Donohoe
A enchanted and living dagger provides a different point of view on the attack on Solace and the flight of the companions as they fled Solace. Ostensibly Flint’s dagger, it is evil and longs to be fed blood.

This was the second weakest story in the book. This collection started out strong, but finished just horribly with the last two stories.

Posted by Brian Schwartz at 8:11 PM