Dan Lambert is a Vietnam veteran living in rural Louisiana and fallen on hard times. Behind on his work truck payments, he struggles to find day work to make ends meet. The days are hard on him because he has a brain tumor – the result of exposure to Agent Orange. 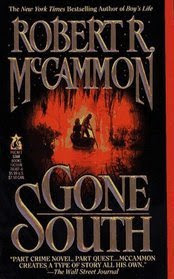 One day, he goes to the bank to appeal to the loan officer to get an extension on his payments because he’s two payments behind. The old loan officer he used to deal with is gone and a new guy is there. The new guy is unyielding. Dan blows up – or goes south in the parlance of the Vietnam vet – and tears up the office. A security guard approaches and the loan officer pulls out a gun. Dan takes the gun and shoots the loan officer in the neck. Having killed him, Dan flees.

He takes off in his truck and drives into the country to hide. He eventually finds a remote camp with cabins where he can stay. He makes arrangements with his ex-wife to see his son just one more time before he becomes a permanent fugitive for the rest of his short life.

Meanwhile, the bank has put out a $15,000 reward on Dan Lambert and a bounty hunter decides to put his best man on the trail. Flint Murtaugh is an itinerant gambler in debt and needing a bounty. His boss puts him onto Lambert, but insists he take on a partner to train the new guy. Murtaugh is not happy, but not in any position to argue.

Murtaugh arrives at a shabby hotel to meet his new partner. The man who answers the door is a malodorous, fat slob who bears a striking resemblance to Elvis Presley. When he speaks, he sounds just like the King. He introduces himself as Pelvis Eisley and he has a little dog that goes everywhere with him. His boss made it clear that if he wanted this collar, Eisley was going to go along.

Dan has held up at a remote resort camp in the swamp that has seen better days. He is going to wait it out there until night when he plans to slip into town and call his ex-wife, hoping to arrange one last meeting with his son. He goes in and makes the call and the wife agrees to slip her police protection detail and meet him at a park.

They meet and Dan starts talking with his son. However, Murtaugh and Eisley show up, planning to take Dan – who has developed a reputation as a cold blooded killer after the husband of the couple who kept the camp was found murdered. (He was killed by his own wife). A scuffle ensues and while his ex-wife tangles with Murtaugh and his “little brother” who is nothing more than a third arm that protrudes from his chest and explores its surroundings at will. Dan wrestles away Murtaugh’s gun, unloads it, and flees, throwing it away. He gets in his car and tears off, almost hitting Eisley and his little dog.

Dan flees through the night and arrives at a truck stop in the wee hours of the morning. While having his coffee, he notices a young couple having an intense argument. The young girl is beautiful except for a large, wine stain birthmark that covers almost half her face. When her ride ditches her, the waitress suggests that Dan take the girl down the road since they are headed the same direction.

Dan is reluctant to take on passengers, considering that law enforcement will be prone to pointing guns at him eventually. Arden Halliday is insistent that she ride south with Dan so that she might enter the swamps and locate the legendary Bright Girl who has the power to remove the unsightly blemish from Arden’s otherwise beautiful face. Nearly exhausted, Dan relents.

Murtaugh and Eisley are forced to stake out a remote cabin owned by a friend of Lambert – The only lead they have. They sit for hours and Eisley talks incessantly, driving Murtaugh crazy. Eisley eats and drinks junk food constantly and his dog constantly yips as Eisley fawns all over it. Murtaugh has had it and decides to move. They go into town to use the bathrooms and get something to drink.

While there, Murtaugh notices a group of strong men unloading alligator they have poached from the swamps. He does not pay them much attention until they attack him in the bathroom, convinced that he is working with a rival drug dealer. Murtaugh is about to experience some severe indignity before dying when Eisley breaks into the room and takes care of the men assaulting Murtaugh. They escape to return to their perch to watch the cabin.

Finally, in the wee hours of the night, Dan and Arden pass them there. Murtaugh switches on the lights and the pursuit is on. They fly out the gravel roads at high speeds and eventually, Dan’s car goes off a bridge and into the water. Dan and Arden escape underwater while Murtaugh and Eisley search the wreckage.

Dan Lambert and Arden float far downstream and find a small encampment where there are boats. They take a boat and head for an offshore oil rig a few miles out in the swamp. There, they are treated halfway decently and Arden gets some leads as to where she can find the Bright Girl. She is eager to pursue them while Dan is eager to get out of the country.

Soon after their arrival, Murtaugh and Eisley show up for their quarry. Dan is allowed to eat his last meal before Murtaugh shackles him. While everyone is eating, the local leathernecks are hassling Eisley for an Elvis number. Instead, he sits at the piano and plays wonderfully a mix of classical music fused with jazz and creole. The audience – including Murtaugh and Lambert are blown away by his talent.With the arrest affected and the tension ramped down, they all try to convince Eisley that he has a real future in music – much better than he has in private investigation and bounty hunting.

The next morning, the whole group is taken by the drug runners Murtaugh had encountered earlier and taken to a private island to be disposed of. A firefight ensues on that island and Danny and Arden escape to a charity hospital. Murtaugh and Eisley also escape, pondering a new pursuit in the music industry. Arden will serve as THE bright girl for this hospital and Dan will serve out his days as a maintnenance man before his sickness can take him.

According to Mr. McCammon, Gone South was written during a very dark period in his life. Much of that darkness is reflected in the characters. Dan, an otherwise good guy, is a legitimate fugitive from justice for killing someone. Dan is a veteran who served his country faithfully. He’s not the villain. He got cancer from his government dumping toxic chemicals on him while he was waging war.

Arden is a victim seemingly as without hope as Dan. Her surface beauty cursed by an unfortunate birthmark. Her hope rests with a seemingly impossible cure provided by a shaman. That’s all she has to hang on to.

Murtaugh is tragic as well, with that odd appendage growing from his chest and a youth lived in freak shows. More tragic for him is having to suffer the irritating companionship of Pelvis Eisley. If you’ve ever been trapped in a car for hour upon hour with a person who just irritates the hell out of you with everything they say and do, you feel sorry for Murtaugh. Murtaugh’s motivations do not make him a villain. He’s doing a job.

Eisley is not a villain because, despite his annoying personality and bizarre countenance, he is a good guy trying to learn a new trade to support himself. He has no ill will toward Dan. We find out that he is in fact a talented musician who hides talent behind a bizarre stage show.

This novel resembles Mine in that it is a chase story. The pace isn’t nearly as frantic. But the characters are a lot broader and deeper.

The darkness of McCammon’s mood shows in that neither of the main characters really get what it was they were after. They get a resolution that will bring them some satisfaction. But Dan is never going to get escape or redemption. Arden is never going to get her surface beauty ruined by a freak birth defect. Not a happy or satisfying ending.

McCammon has never written a bad book that I’ve read and I’ve read all but the very latest. Going South is probably ranks in the lesser of his works. It has not the great gravitas of Swan Song. It lacks the frantic energy of Mine. It lacks the spooky element of They Thirst.

That said, McCammon tells a nifty story outside of the genre of horror. That was his goal. He wanted to show his chops as a writer at a time when his publisher was demanding horror and his southern contemporaries were demanding he write about the southern experience. Other than weather and geography, there was nothing in Gone South that was about the Southern experience. Other than the vague allusions to the witch living in the swamp who could heal Arden’s birthmark, there were no supernatural allusions.

It would be approximately 10 years before McCammon would publish again. This time, he’d eschew both traditional settings and the southern experience to tell a tale of historical fiction. That voluminous tome, Speaks the Nightbird, brought him back and perhaps assuaged some of those old feelings of anger and professional jealousy of horror writers who were able to break out into more traditional writing. God knows McCullough has the writing chops to go head to head with any writer in America today.

Posted by Brian Schwartz at 7:37 PM