In Dune, Frank Herbert spins a complex tale of interstellar spying, treachery, mysticism, and military science fiction. He does a wonderful job of blending the genres. 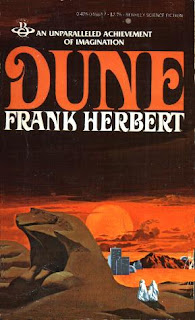 Melange – or “Spice” -- grows on but one planet in the universe. Arrakis is the center of commerce for the Landsraad – the families that rule the universe. The emperor Shaddam IV grants House Atreides and its Duke, Leto, the planet. Fearing Leto’s popularity among the Landsraad, Shaddam hopes that a feud between Atreides and the House Harkonnen will spell the end of Leto’s power.

The Atreides move to Arrakis. Leto brings with him his concubine, Lady Jessica – a Bene Gesserit, and his teenaged son Paul. The Bene Gesserits are an order of witches who use their disciplined and trained minds to exert control of themselves and others. Paul is also a Bene Gesserit. Jessica was ordered by her order to give birth to a daughter. But Jessica chose to conceive a son as an heir for Leto.

On Arrakis, the Atreides are able to thwart initial Harkonnen traps and complications while simultaneously, through Leto's Swordmaster Duncan Idaho, building trust with the mysterious desert Fremen, with whom they hope to ally. However, the Atreides are ultimately unable to withstand a devastating Harkonnen attack, supported by the Emperor's fearsome, virtually invincible Sardaukar troops disguised as Harkonnen troops and made possible by a traitor within House Atreides itself, the Suk doctor Wellington Yueh. House Atreides is scattered, and of its principal retainers, Mentat Thufir Hawat is taken by the Baron Harkonnen and eventually provides his reluctant services whilst formulating a plan to undermine the Baron; the troubadour-soldier Gurney Halleck escapes with the aid of smugglers, whom he joins; and Duncan Idaho is killed defending Paul and Jessica. Per his bargain, Yueh delivers a captive Leto to the Baron, but double-crosses the Harkonnens by ensuring that Paul and Jessica escape. He also provides Leto with a poison-gas capsule in the form of a false tooth, which Yueh instructs a drugged Leto to use to simultaneously commit suicide and assassinate Harkonnen. The Baron kills Yueh, and Leto dies in his failed attempt on the Baron's life, though the Baron's twisted Mentat Piter De Vries dies with him. Paul and Jessica flee into the deep desert, escaping the Harkonnens by following instructions laid out in advance by the traitor Yueh. They successfully navigate through a sandstorm, a seemingly impossible task that leaves the Baron convinced that both of them are dead.

Jessica's Bene Gesserit abilities and Paul's developing skills help them join a band of Fremen. Paul and his mother quickly learn Fremen ways while teaching the Fremen what they call the "weirding way", or the Bene Gesserit method of fighting. Jessica becomes a Reverend Mother, ingesting the poisonous Water of Life while pregnant with her second child; this unborn daughter Alia is subjected to the same ordeal, acquiring the full abilities of a Reverend Mother before even being born. Paul takes a Fremen lover, Chani, with whom he fathers a son. Two years pass, and Paul increasingly recognizes the strength of the Fremen fighting force and their potential to overtake even the "unstoppable" Sardaukar and win back Arrakis. The spice diet of the Fremen and his own developing mental powers cause Paul's prescience to increase dramatically, allowing his foresight of future "paths" of possible events. Regarded by the Fremen as their prophesied messiah, Paul grows in influence and begins a jihad against Harkonnen rule of the planet under his new Fremen name, Muad'Dib. However, Paul becomes aware through his prescience that, if he is not careful, the Fremen will extend that jihad against all the known universe, which Paul describes as a humanity-spanning subconscious effort to avoid genetic stagnation.

Both the Emperor and the Baron Harkonnen show increasing concern at the fervor of religious fanaticism shown on Arrakis for this "Muad'Dib", not guessing that this leader is the presumed-dead Paul. Harkonnen plots to send his nephew and heir-presumptive Feyd-Rautha as a replacement for his more brutish nephew Glossu Rabban — who is in charge of the planet — with the hope of gaining the respect of the population. However, the Emperor is highly suspicious of the Baron and sends spies to watch his movements.[verification needed] Hawat explains the Emperor's suspicions: the Sardaukar, all but invincible in battle, are trained on the prison planet Salusa Secundus, whose inhospitable conditions allow only the best to survive. Arrakis serves as a similar crucible, and the Emperor fears that the Baron could recruit from it a fighting force to rival his Sardaukar, just as House Atreides had intended before their destruction.

Paul is reunited with Gurney. Completely loyal to the Atreides, Gurney is convinced that Jessica is the traitor who caused the House's downfall, and nearly kills her before being stopped by Paul. Disturbed that his prescience had not predicted this possibility, Paul decides to take the Water of Life, an act which will either confirm his status as the Kwisatz Haderach or kill him. After three weeks in a near-death state, Paul emerges with his powers refined and focused; he is able to see past, present, and future at will, down both male and female lines. Looking into space, he sees that the Emperor and the Harkonnens have amassed a huge armada to invade the planet and regain control. Paul also realizes that his ability to destroy all spice production on Arrakis using the Water of Life is his means of seizing control of it.

In an Imperial attack on a Fremen settlement, Paul and Chani's infant son Leto II is killed and the four-year-old Alia is captured by Sardaukar. She is brought to the planet's capital Arrakeen, where the Baron Harkonnen is attempting to thwart the Fremen jihad under the close watch of the Emperor. The Emperor is surprised at Alia's defiance of his power and her confidence in her brother, whom she reveals to be Paul Atreides. At that moment, under cover of a gigantic sandstorm, Paul and his army of Fremen attack the city riding sandworms; Alia assassinates the Baron and escapes during the confusion. Paul defeats the Sardaukar and confronts the Emperor, threatening to destroy the spice, thereby ending space travel and crippling both Imperial power and the Bene Gesserit in one blow. The new Baron Harkonnen, Feyd-Rautha, challenges Paul to a knife duel to the death in a final attempt to stop his overthrow, but is defeated despite an attempt at treachery. Realizing that Paul is capable of doing all he has threatened, the Emperor is forced to abdicate and to promise his daughter Princess Irulan in marriage to Paul. Paul ascends the throne, his control of Arrakis and the spice establishing a new kind of power over the Empire that will change the face of the known universe. But in spite of his power, Paul discovers that he will not be able to stop the jihad in his visions. His legendary state among the Fremen has grown beyond his power to control it.

Herbert masterfully crafts a wonderful universe full of political and business intrigue. He develops a mystical theology based in witchcraft. He takes these old story tropes of political intrigue, magic and mysticism, combines them with superb storytelling with plenty of well crafted battle scenes and delivers a novel that is an incredibly fulfilling reading experience.

I am not an historian of science fiction literature. I am a fan of the great pulp writers who elevated the craft. Guys like Asimov, Matheson, Dick, Heinlein, and Bradbury are my favorite authors to read. It seems to me that, prior to Dune, most sci-fi story telling lacked this multi-dimensional storytelling. Yes, there was plenty of political intrigue and skullduggery in Asimov’s Foundation, which predates Dune. Many sci-fi writers dabbled in mysticism in their stories and novels. But none ever developed – in my reading experience – the complexity that Herbert achieves with Dune.

The novel – like most novels – was not without its shortcomings. My chief criticism is Paul’s seamless development from spoiled prince to legendary Muad’Dib. Such a change in status would be unsettling. The death of his father, the seeming betrayal of his closest ally, the displacement from a castle to a desert would be disconcerting. Finding out that you are a living legend might also be somewhat emotional. Not to Paul.

He simply rolls with the punches and is seemingly devoid of any self-analysis, any crisis of confidence, any sense of displacement. This really robs the reader of emotional attachment to the story’s hero. Paul, while a heroic figure, is not particularly sympathetic. The people he leads – oppressed for time immemorial – are certainly sympathetic. His worried mother. His displaced wife. His tragic girlfriend all invoke sympathy. But not the heroic Paul. I would have liked to care about Paul a lot more.

It’s almost impossible to miss the influence of Herbert’s Dune upon George Lucas in his development of the Star Wars universe. Like Herbert, Lucas places a great deal of emphasis on the development of a fictional theology and making it an integral part of his story. Lucas’ theology of the Force and an order of knights known as the Jedi is completely different than the witchcraft of the Bene Gesserit. But it appears Herbert provided the blueprint for how to develop theology within science fiction.

Dune is not only a must-read for even the casual fan of American science fiction. It is a must-read for students of contemporary American literature. It certainly ranks among the great American novels of the 20th century.

Dune has inspired two movie adaptations. David Lynch directed a rather erratic adaptation in 1981 starring Kyle Maclachlan and Sting. In 2000, the SyFy network adapted it for a more complex miniseries which incorporated bits from subsequent novels to more fully develop the political intrigue.

Posted by Brian Schwartz at 5:24 PM