The Currents of Space By Isaac Asimov

The Currents of Space
By Isaac Asimov
Copyright 1952

The story takes place in the backdrop of Trantor's rise from a large regional power to a galaxy-wide empire, unifying millions of worlds. This story occurs around the year 11,000 AD (originally 34,500 AD, according to Asimov's early 1950s chronology), when the Trantorian Empire encompasses roughly half of the galaxy. 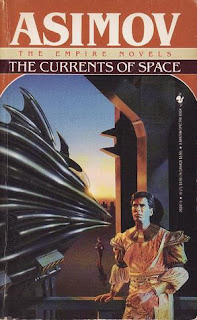 The independent planet Sark exploits the planet Florina and derives its great wealth from "kyrt", a versatile and fluorescent fiber that can only be grown on Florina. The relationship between the two planets is analogous to the situation between European imperial powers and their colonies during the 19th century, where the Florinians are forced to work in kyrt fields and are treated as an inferior race by the Sarkites. Attempts to break the Sark monopoly and grow kyrt on other worlds have thus far been unsuccessful. Meanwhile, Trantor would like to add these two worlds to its growing empire.

There is a hidden irony in Sark's dominion over Florina: clear parallels to the American South growing cotton with slave labor. The Florinians are one of the lightest-skinned people in a galaxy where racial categories seem to have been forgotten, except by the people of Sark. One of the characters, Dr. Selim Junz, comes from Libair, a planet with some of the galaxy's darkest-skinned people, and feels sympathy for the Florinians.[1] (The planet Libair takes its name from Liberia, a country in Africa, which would explain a dark-skinned genetic inheritance. Liberia was also settled by freed slaves from America.) Also, Asimov chose the name of "kyrt" to be rather similar to "cotton", and he explains that it contains cellulose.

The possible destruction of Florina is predicted by Rik, a "spatio-analyst", who has had his mind manipulated by a "psychic probe" device, resulting in gross amnesia. When Rik gradually starts remembering his past, it produces a political crisis involving Sark, Florina, and Trantor. Rik, a native of the Earth, had discovered that Florina's sun is about to explode into a nova because it is being fed carbon by one of the outer-space "currents of space", supposedly rather like the currents of the ocean.

It is also revealed at long last that the special energetic wavelength of light that is being emitted by Florina's sun is what causes the very high-quality kyrt fiber to grow there. This is the explanation why kyrt cannot be grown on other planets – since stars going nova are really quite rare, and stars with habitable planets that go nova are rarer still.
Because losing Florina would mean losing the only source of its vast wealth, there is strong resistance from Sark to accept the message. However, when it is explained that the wealth is already lost since the conditions that enable kyrt to grow can be easily duplicated anywhere now that they are understood, they become more amenable. When Trantor offers to buy out the entire planet for a very high price, the offer is readily accepted.

Even though there is not yet a full Galactic Empire, Trantor does control the now largely radioactive Earth. The idea of evacuating Earth is mentioned, but that is strongly rejected by Rik. He insists that it is the original planet of the human race, though this is not generally accepted.

Before there was Spice on Arrakis in Frank Herbert’s Dune, there was Kyrt on Florina in Asimov’s Currents of Space. Like so many science fiction novels, Asimov’s story is a struggle of exploitation of a native peoples for a natural resource. I don’t know if it is the earliest example of this trope. But it is the earliest I’ve read.

Asimov weaves a fairly complex tale of espionage, spying, betrayal and nobility in The Currents of Space. However, Asimov’s pulp sensibilities got in the way of him ever really developing the story the way it could have or should have been done.

Like so many science fiction writers of that generation, Isaac Asimov cut his teeth on the pulps. He wrote for them from a very early age and they eagerly published his work, developing for him a large fan base that allowed him to publish novels that sold well. A pulp writer economizes words. Pulps want a lot of story in just a little space. What usually suffers in this case is character development.

The book has very much the feel of the space opera that were featured in the reels of the Saturday matinee features of the 1950s. The plot moves almost constantly which helps make up for the shortcomings of character development. The action is non-stop. Of course, many years later, George Lucas would refine the space opera and make it something divine in the annals of science fiction with Star Wars.

For as thin as it is, The Currents of Space does have a little subtext. The people of Sark, who exploit the people and resources of Florina, are black – or at least dark skinned. The workers of Florina are white. Like the plantation owners of the antebellum South, the rulers of Sark use educated Florinians to supervise the workers. The subtext is not thinly veiled, but like most other aspects of The Currents of Space, it is not developed.

The Currents of Space is not one of Asimov’s better works and of all of the books within the Foundation universe, it is probably the weakest. It does not have the character development to sustain its complex plot. It is not without its charm with its non-stop action. But it is devoid of humor or any other nuance that might have added just a little bit to this tale.

The Currents of Space is the second in the chronology of Asimov’s Galactic Empire series with the first being The Stars Like Dust and the third being Pebble in the Sky.

Posted by Brian Schwartz at 6:20 PM