Speaks the Nightbird By Robert McCammon

Matthew Corbett, raised in a New York orphanage, is now the clerk for magistrate Isaac Woodward. The year is 1699 and the two are en route to the Carolina colony settlement of Fount Royal to oversee the trial of Rachel Howarth – accused of witchcraft and the murder of her husband and the local minister. 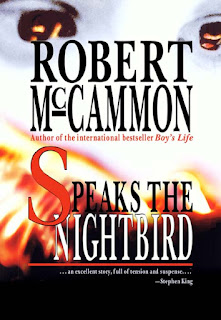 The two are waylaid on their way by an unscrupulous innkeeper, but eventually arrive in the colony, sans all of their worldly possessions. The rainy weather has afflicted Woodward with a cold that gets progressively worse. Woodward resolves that the trial will go forward despite his ill health.

Matthew makes a grievous error before the trial begins that costs him dearly. He enters a barn belonging to the blacksmith to investigate. He finds some strange objects secluded in a bag buried in the hay. Before he can ascertain what they are, he is caught and sentenced to three days in jail and three lashes.

At the order of the settlement founder, he is jailed alongside of Rachel Howarth and is immediately smitten with the dusky woman of Portuguese descent. She is polite and occasionally looks to Matthew for emotional support, but obviously does not return his affection.

As Matthew is imprisoned and colony officials press for the trial to move forward, the trial is held in the jail itself so that Matthew may continue his sentence. Witnesses to Rachel’s witchcraft are brought in one by one. They describe seeing sexual congress with demons and Satan himself. Yet, there are no witnesses to the murders themselves. Matthew is convinced she is guilty of neither crime and is determined to prove her innocence – much to the chagrin of the locals.

The inhabitants of Fount Royal want Howart executed and the sooner the better. Her presence and fear of her has caused many to leave the colony. They blame her evil for the ongoing rain that has blighted many crops. Unexplained fires take the schoolhouse and uninhabited homes. The sooner Rachel Howarth is burned at the stake the better as far as the people of Fount Royal are concerned.

Matthew is eventually released and receives his three lashes. As Woodward becomes bedridden with his malady, Matthew commences with his investigation. He learns about the strange residents of Fount Royal – the Oxford educated school master with a bum knee, the blacksmith with a strong affection for his horse, the master of Fount Royal and Matthew’s host who is determined to see Howarth burn, the ratcatcher with a taste for ancient literature, a settlement clerk with a strong grudge against his employer. Also in town are a group of “maskers” or actors who are to deliver a performance of morality tales to lift the spirits of the townspeople and a preacher who has his own proposal to “save” Rachel.

Clues abound. There is the theft of a Spanish gold coin taken from the waylaying innkeeper. Turtles with Spanish coins in their bellies. Mysterious deliveries of buckets of incendiaries in the night. Matthew struggles to put it all together.

Matthew encounters many red herrings in his investigation, but eventually discovers who is behind the two murders, the framing of Rachel, and their motives involving secluded pirate treasure. But he can’t prove any of them to the magistrate. With his health ebbing, Woodward signs Rachel’s death warrant. Matthew becomes desperate.

He decides to take her from her prison and flee to the Florida country. Being Portuguese, he is hopeful that she can find sanctuary among the Spanish. With the help of a couple slaves, he spirits her away and they head south into the swamp. As they make their way toward Florida, Matthew is attacked by a bear. He is badly injured but manages to kill the bear. They are rescued by some friendly Indians and in their camp, Matthew finds the final piece of the puzzle that will allow him to return to Fount Royal and prove Rachel’s innocence.

They return to find Fount Royal nearly empty. The continued bad luck and the escape of the witch have driven people away. Working with his host, Matthew is able to assemble all of the suspects in one room and one by one, eliminate them until the real murderer is proven.

Rachel is set free and decides to stay in Fount Royal for a while. Magistrate Woodward struggles valiantly against his illness – and against 17th century curatives, but eventually succumbs. Before he dies, Woodward gives to Matthew the name of a magistrate in New York who will provide him with employment.

The book ends as Matthew leaves Fount Royal and the Carolina colony behind, a little richer in money and having loved a woman who could not return that love. He heads for New York for new employment and thoughts of visiting vengeance upon the master of the orphanage where he grew up.

Speaks the Nightbird was Robert McCammon’s triumphant return to publishing. While the book reestablished the author after nearly 10 years of silence, it was also the book that derailed his career.

Like all writers do, McCammon grew in his skill at crafting stories and matured. Behind him were B-movie pastiches and other horrors. He had written a beautiful coming of age story in Boy’s Life, a fantastic chase thriller with Mine, and a quarky thriller with Gone South. He was clearly moving away from the horror genre and determined not to get pigeon-holed as a horror writer.

His publisher was unhappy when he delivered Speaks the Nightbird – a historical fiction murder mystery. They wanted another horror story they could market with McCammon’s name which had increased in value with horror readers. McCammon, discouraged, withdrew the manuscript and retired from writing.

Almost 10 years later, he submitted to Speaks the Nightbird to a small publishing house in Alabama. They took a risk on the voluminous book and published it. In doing so, they released to the public another McCammon masterpiece.

For someone who did not write mysteries, McCammon’s first effort was absolutely brilliant! There are no easy solutions to the crimes in Speaks the Nightbird. The red herrings are all plausible. Like classic murder mysteries, everybody and nobody had a motive. The young lady who was framed was tragic. Young Matthew’s love for her pure. It all worked quite well together as McCammon weaved his tale.

The inhabitants of Fount Royal are all quarky and bizarre in their own way, but never silly. Nobody is over the top in their behavior and all conform to the social norms of the period. As Matthew encounters them again and again, the characters and suspects become more richly developed and more mysterious. I do not ordinarily enjoy murder mysteries, but when the characters are as well developed as these, it is impossible not to enjoy the story.

To dismiss Speaks the Nightbird as just a murder mystery is to give it short shrift. It functions as a wonderful piece of historical fiction. It is a wonderful character study of Matthew. Many subplots are working underneath the murder mystery and, while not all are directly related to the mystery itself, they serve to enrich the plot and make the book more engaging.

My only complaint about Speaks the Nightbird is a small one. The resolution of the murder is a trite device. Gathering all the suspects in a room and cross examining them is too much like the mass produced Ellery Queen, Sherlock Holmes, Perry Mason mysteries. A better device could have been employed. Having said that, McCammon does make the best use possible of the cliché. He has you guessing right up until the resolution.

Speaks the Nightbird is an absolute triumph for a brilliant author who would defy convention and publishing house dictates. McCammon would not be confined to horror. There is nothing wrong – and very much that is right – with writing horror for a living. But McCammon obviously felt he’d mined the genre for all he could. He had to go where his muse took him and it took him to Matthew Corbett’s world – a world he would revisit again and again with great success.

Since it was published in 2002, Speaks the Nightbird and its hero, Matthew Corbett have generated sequels that fans find equally thrilling and satisfying. The Queen of Bedlam, Mister Slaughter, and later novels all feature the young law clerk. It is not unusual for an older writer to become attached to a hero such as Corbett and decide to see where the writing takes him. Stephen King has latched onto Detective Bill Hodges in the waning days of his career. Dean Koontz has his Odd Thomas and the characters of Frankenstein to explore. None of them are as good or deep as Matthew Corbett.

Speaks the Nightbird is a fantastic genre blend. Well researched, it is a fantastic historical fiction novel. Well plotted with excellent characters, it makes a fine murder mystery. With its notions of witchcraft and demons, it will appeal to fans of horror. Kudos Mr. McCammon on one of the finest novels of the 21st century so far.

Posted by Brian Schwartz at 5:12 PM