Jimmy Carter is a prodigious memoirist, writing several autobiographical accounts of his life. Keeping Faith is a memoir of his presidency and opens not at the beginning of his presidency, but on its final day. 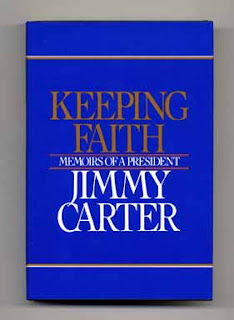 Carter chooses an unusual format to recall his presidential years. Traditionally, presidents move in chronological order, starting at the beginning and moving through the issues and crises as they presented themselves. Instead, Carter takes one issue at a time and provides narrative and commentary on them.

I didn’t think this particular format worked. It made for dry reading. When you read the memoirs of former presidents like Nixon, Ford, and Clinton, you get to know those men through their thoughts, their expressed frustrations, and their expressed ideals. Carter’s approach has him saying, “I proposed this. Congress did this. I said that and he said this.” It is all very dry and the man who is Jimmy Carter remains an enigma.

Jimmy Carter had a brutal presidency and one not known for great achievements. The Camp David Accords stand as perhaps the one reach for greatness that Carter made and as perhaps one of the great diplomatic achievements of the twentieth century. Shamefully, Carter’s retelling of the events make it almost impossible to appreciate the accords for what they were.

Carter was known as a detail man. He micromanaged every facet of his administration. In telling the story of the Camp David Accords, Carter spares no detail, no matter how mundane. My eyes glazed over as I read blow by blow accounts of meetings between the parties. There were way too many details and not nearly enough analysis. Almost half of the book deals with Camp David and there was certainly much more going on in the four years of the Carter administration.

Carter does not reveal much about the relationships he had with his close advisors. He does discuss Bert Lance and that relationship in great detail because Lance’s scandal was a tremendous blow to the administration that placed a premium on honesty. But Carter’s chief of staff, Hamilton Jordan, was a colorful character who was prone to saying and doing the wrong thing. Carter provides no insight into what it was like to work with Jordan. We scarcely get to know his closest advisors with the exception of Zbigniew Brzezinski who was National Security Advisor and Cyrus Vance who was his first secretary of state.

Carter also gives very short shrift to his domestic agenda and relations with Congress. To read Carter’s memoirs, one would believe that Carter had warm relations with Tip O’Neill and Robert Byrd. It was quite the contrary. Carter enjoyed four years of Democratic rule in both chambers of Congress, but could not get a domestic agenda passed. This was because he did not and would not understand how Congress worked. This was in an age when the prerogatives of the legislature meant more to its members than party loyalty. Carter never got that and, in writing his memoirs, it appears he still doesn’t understand why he met with so much resistance from his party.

Carter had to feel some angst over the state of the economy during the latter half of his presidency. It was certainly in shambles. Unemployment was double digits, interest rates were sky-high, and inflation was out of control. Add to it an energy shortage and you have the makings of an economic calamity. Carter does not comment on this at all. He does discuss his efforts at passing an energy program, but provides scant detail as to what this program was. Nor does he provide any analysis as to why it failed to pass. The economy, as bad as it was, is barely mentioned.

Where Carter is at his best in writing about his years in the White House is in describing the events that led up to the Iranian hostage crisis and measures he took to secure their release. The book opens with his very last minute efforts to push through the transfer of funds to Iran to secure their release. In later chapters, he describes the American relationship with Iran and the Shah and how it deteriorated. The conflict between diplomats, the military, and security officials that followed the fall of the Shah is fascinating and Carter tells it well.

Here, Carter does make the reader sympathize with him. He was clearly anguished by the plight of the hostages and spared no effort in trying to secure their safe release. He also clearly describes the abortive military effort to rescue the hostages and how it failed. This failure was unfairly laid at the feet of Carter by the American public and led to a rapid deterioration of his approval. Carter does not complain and in retrospect, it was quite unfair. I respect the man for having made the bold attempt at rescue.

What I was looking forward to the most was a narrative about the Crisis of Confidence speech – or the “Malaise Speech” as it is commonly known. Not before or since has a national presidential address been so poorly conceived and delivered and I was curious to see how Carter would defend it.

He chose not to defend it. In his telling, it was all a grand success. The reality was much different. When he cancelled his scheduled address to the nation on energy and retreated to Camp David, he created an air of crisis where none existed. That is not necessarily bad. A manufactured crisis can serve a president well. But when you start inviting poets and ministers to advise you as Carter did during his retreat, you appear to be a leader full of self-doubt. When you are the president, you can admit error. But you can never admit to a lack of self-confidence. That is how it appeared to the nation.

Then the speech itself was delivered. It resonated well as a call to action. Then, pundits and opponents began to parse it. Upon closer examination, Carter seemed to be blaming the American people for the state of woe in the country. He accepted no responsibility. He made no exclamation of meeting the challenges facing the nation. Ronald Reagan used its text to malign Carter as a man out of touch with his country. The crisis of confidence was not in themselves, Reagan said. The crisis of confidence was in the man in the White House.

Carter’s bitterness toward Reagan seeps into his memoir. While this is a natural human emotion, it is not statesmanlike and Carter comes off looking somewhat petty. Reagan was considerate to Carter as the outgoing president and Carter refuses to acknowledge this.

Carter does express a great deal of warmth for Gerald Ford and, on several occasions, talks about the support Ford lent him as president. He also seems to hold Richard Nixon in high regard, discussing his advice in foreign affairs and the long trip the two took together to the Begin funeral.

The Carter presidency is soon due an unbiased and thorough examination by scholars as passions fade about the man and his presidency. They will soon begin that dispassionate analysis that we are now getting of Lyndon Johnson and Richard Nixon. A president’s memoirs lend themselves to this process. But Carter’s offer scant information to historians that’s not already available. Historians look to memoirs for a man’s passions, prejudices, anguish, and pride. Carter leaves little for historians to work with in this dry tome.