The Queen of Bedlam By Robert McCammon

The Queen of Bedlam
By Robert McCammon
Copyright 2007

Three years after Matthew Corbett freed the falsely accused witch of the Fount Royal settlement in the Carolina colony, Matthew Corbett has relocated to New York City. He is a clerk to a distinguished magistrate and a young man about town. He is also a bitter, angry young man bent on revenge against Eben Ausley, the evil head of the orphanage where he grew up. 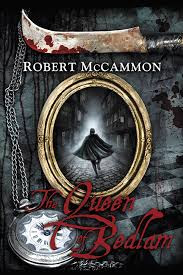 As Matthew stalks Ausley through the streets of New York, cataloging in his mind Ausley’s comings and goings and gambling losses, he stumbles into a murder mystery. A serial killer is working the streets of New York and his nom de guerre is The Masker. He has already killed a doctor and, as Matthew stalks his quarry through the streets, he comes across a second murder – that of a local merchant who was well respected in town.

Loving a good mystery and always determined to see justice done, Matthew devotes his spare time to the solving of the Masker murders. He comes to the attention of a local businesswoman who runs a “problem solver” agency – private investigators. Matthew is hired as a junior associate of the Herrald Agency and put into rigorous training in fighting and self defense.

He also comes to the attention of the widow of the businessman who was murdered. She offers him ten shillings to find her husband’s killer. Matthew gives up clerking and turns to private sleuthing.

His first official case for the Herrald Agency is to visit a nearby asylum where an elderly woman is housed. She is incommunicative, but is kept in regal comfort by a mysterious benefactor. In talking to her, Matthew quickly establishes a link between the Masker murders and the mysterious Queen of Bedlam.

The case takes a stranger turn when Aubrey himself is the victim of a Masker murder with Matthew in pursuit. He stalks the murderer to the home of a local lawyer and acquaintance. The lawyer, dubious of Matthew’s suspicions, allows him to search the home. He finds nothing.

As the case evolves, Matthew soon unravels underhanded and unethical business practices in the New World spanning between New York and Philadelphia. In doing so, he comes to the attention of a mysterious, villainous criminal empire headed by a faceless Dr. Fell. He and the daughter of a local printer are taken prisoner by Dr. Fell’s men and are confronted with the prospect of becoming quarry in a hunt carried out by young orphans brandishing daggers. In the end, and unlikely alliance of good and corrupt comes together to save the day and Matthew escapes. He returns to New York to unmask the Masker and solve the crime.

He returns to the Bedlam asylum for one final meeting with the Queen. He brings with him the answer to her mysterious question and ties up all the ends. He looks forward to advancing in the Herrald Agency and moving on to new adventures while avoiding the mysterious Dr. Fell who now has it in for him.

I enjoyed McCammon’s second installment of the Matthew Corbett series every bit as much as I did the first. As I stated in my review of Speaks the Nightbird, I am not a fan of mysteries. Nor am I much of a fan of historical fiction. But I am a fan of Corbett and a huge fan of Mr. McCammon.

I don’t read enough mystery fiction to be an expert on how they should be written. I have read enough to recognize telegraphed clues, obvious suspects, thin red herrings, and ex deus machina and how it ruins the book. The reader is not going to find that in the Corbett series.

Just like Speaks the Nightbird, McCammon keeps the reader thinking. The red herrings are well disguised and not discerned easily. The clues are well disguised and cleverly contrived. There are several mysteries within the mystery and more than a few subplots which McCammon brings together delightfully at the end. If McCammon keeps writing mysteries, I’ll certainly keep reading them.

Recurring characters can be a mixed bag for writers. Too often, they become like the Hardy Boys. Same people who never change solving the same mysteries with different venues and different clues. Corbett evolves under McCammon’s treatment. He’s no longer the naïve youth just a few years out of the orphanage. He’s older and angry to a large degree. His anger directed at Eban Aubley serves to make him a human and plausible character rather than a caricature hero dedicated to truth, justice and the American way.

McCammon does not let that bitterness and anger undermine what we like about Corbett which is his dogged determination to do what is right. The problem of Aubrey is sorted out nicely to lend itself to the mystery, resolve the reader’s – and Matthew’s -- desire for justice for the fiend, and to leave Matthew’s hands clean.

Corbett gets a sidekick of sorts in The Queen of Bedlam that promises to add future dimensions to new Corbett adventures. Hudson Greathouse, a senior partner at the Herrald Agency, is Matthew’s superior and trainer and sometimes antagonist. He’s the opposite of Matthew in that he’s surly, a brawler, and cocksure. The addition of Greathouse increases the awareness of Matthew’s shortcomings and enhances his strengths. The partnering lent itself well to Matthew’s development in The Queen of Bedlam and promises to make the next book in the adventures of Matthew Corbett, Mister Slaughter, more interesting as it promises Matthew’s further development.

As Stephen King once said, people are much more interesting than monsters. In the hands of a lesser writer, Matthew Corbett could be the same character confronting a new monster each week on the same station. That would be boring. With McCammon at the helm, Matthew Corbett promises to be an evolving character meeting new and different situations. That is a promising prospect for his fans.

Posted by Brian Schwartz at 6:42 PM