A Stir of Echoes By Richard Matheson

A Stir of Echoes
By Richard Matheson
Copyright 1958

Tom Wallace is a workaday, blue collar joe in 1950s suburbia. He has a lovely wife, a little boy, and a baby on the way. One evening, he attends a neighborhood party and brings along his oddball brother in law. Everything changes for him and his neighbors. 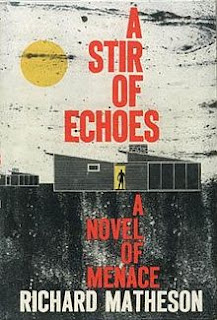 Tom, his wife, Anne, and her brother, Phil, attend a party held at their next door neighbor’s house. They attend to oblige them, but dread it because they throw dreadfully boring parties. Phil, a Berkley psych major, decides to inject some excitement into the party by hypnotizing someone. All turn down his offer until Tom agrees. Phil puts him under.

Everyone has a good laugh at Tom’s antics under hypnosis. Tom and Anne go home that night and Tom is unable to sleep. He goes to the kitchen and finds there a woman, dressed in black. Tom and Anne are discomfited by the specter and her frequent appearances put a strain on their marriage.

Tom begins to sense the feelings of people around him and eventually can read their thoughts. He learns of the amorous desires of one of his female neighbors for him. He also learns that his best buddy is cheating on his pregnant wife.

Slowly, Tom and Anne’s life and the lives of their neighbors descend into chaos. Husbands and wives try to kill each other. Tom predicts disasters and death. All the while, the specter of the woman in black demands Tom’s attention. He needs to identify her and find out what it is she wants.

With a little sleuthing and use of his new abilities, Tom learns that the woman is his next door neighbor – and landlord’s – sister in law who moved away with nary a goodbye to her neighbors. Tom figures out that she was murdered and he’s confident that he knows who killed her. But at just the wrong moment, his enhanced intuition fails him and the murderer turns out to be the unlikeliest of the suburbanites.

I love the works of Richard Matheson – his print work and his screenwork. The man is nothing short of brilliant and was a pioneer in the art of small screen writing and teleplays. With that said, A Stir of Echoes left me a little disappointed.

One thing that every reader of Richard Matheson knows is that you are going to get sparse prose. Matheson was an old pulp writer and pulp writers had to economize on words to get as much story as possible into as few words as he could manage. This takes real talent and few – if any – were as good at economizing words as Matheson. In A Stir of Echoes, he could have used a few more words.

There were too many characters and none of them were developed adequately. Matheson is not a writer of character studies, but his books and stories usually give you a well developed main character that the reader can root for. Not so in this book. Tom is sympathetic, but not someone I really rooted for. Both his virtues and character flaws were underplayed. He was flat.

The periphery characters came and went as was necessary for the story, but also were lifeless. A rogue babysitter kidnaps their child for no apparent reason. His amorous neighbor is amorous, but we don’t know why. His landlord doesn’t like him, but we don’t know why. The ghost should have been chilling, sympathetic, ominous, or something. She was little more than a device for the story.

What did stand out as good in A Stir of Echoes was the mystery and the two plot twists that came near the end. I’m not a reader of mysteries, but enjoy them when they are part of a good ghost story or other story of the supernatural. Matheson had me thinking, analyzing and guessing up until the end, and then blue all of my predictions out of the water with a well-developed and plausible twist. Even when he falls short on character development, count on Matheson to come through with a solid plot.

The subtext of A Stir of Echoes was not hard to discern, given the time it was written. Suburbs of the 1950s were seen as idyllic where nice white people worked at a factory, paid their bills, and led nice, white people lives free from strife and misfortune. Matheson showed that every neighborhood has some sort of dark undercurrent. That those days and places of Ozzie and Harriet were not always as idyllic as portrayed or as Baby Boomers remember them.

A Stir of Echoes was made into a movie in 1999 starring Kevin Bacon. This is a rare case of the movie being superior to the book. The movie better developed its characters and the script made the ghost story and the underlying murder much more ominous and creepy.

This book is a must read for any fan of Richard Matheson because, by virtue of the movie and its standing with fans of horror cinema, it is one of his better known and more popular titles. However, fans of the movie are going to be disappointed in the one dimensional prose and flat characters.

Posted by Brian Schwartz at 7:48 PM