The Girl Next Door By Jack Ketchum

The Girl Next Door
By Jack Ketchum
Copyright 1989

David is a preteen boy living in suburbia. He has his friends in the neighborhood and they do the things preteen boys do. His parents are in a loveless marriage and it bothers him. He does his best to endure. 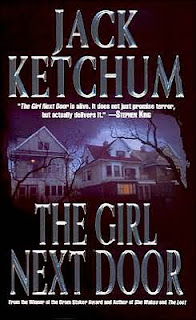 His next door neighbors are his best friends. Donnie and Ralph are not quite as sophisticated in their thinking, but are good guys. Their mother, Ruth, is the ultimate cool mom. She lets the boys drink in her home and keeps their secrets.

One day, David discovers Meg – Ruth’s niece. She and her sister, Susan, have come to live with their Aunt Ruth after their parents were killed in a car accident. Susan is left disabled by the accident. But Meg is pretty and David is immediately smitten with her.

Ruth, however, is not. She takes an instant dislike to Meg and what she sees as Meg’s rebelliousness. The confrontations start out as shouting, then slapping. Soon, things turn much more violent and ugly.

Meg is locked in the basement. Donnie and Ralph take turns hitting her. She is strung up, made to stand on her toes. All of this is done under Ruth’s direction. Meg is starved, forced to eat feces, and urinated upon in her basement dungeon. David observes passively. He is disturbed by his passivity and even participates to a limited degree. He notes that Ruth is becoming increasingly unstable. The more unstable Ruth becomes, the worse it gets for Meg.

Soon, other neighborhood kids join the abuse as it spirals deeper into madness. The phrase, “I fuck, fuck me,” is burned into her stomach. She is molested and eventually raped by the boys. Susan is made to watch. Ruth promises Meg that any misbehavior on her part will result in Susan having to endure her torture. Susan eventually falls into a near catatonic state as her sister is tortured and raped. Eventually, Ruth burns her clitoris with a hot iron to destroy in Meg any sexual desire, having branded her a slut.

Finally, David can take no more. He remembers those early feelings of desire he felt for Meg and resolves to rescue her. His plans go awry and his friends and Ruth turn on him, imprisoning him as well. Finally, the final confrontation ensues and David extracts a measure of justice for poor Ruth.

The Girl Next Door was a singular reading experience for me. I read it in one sitting, unable to put the book down. Ketchum’s ability to tell a story and compel the reader to move forward despite being horrified is unmatched in my reading experience.

The story opens with such innocence -- similar to Stephen King's The Body and Apt Pupil. A preteen boy with a troubled homelife finds a pretty girl and falls for her. He thinks about her constantly. He falls in love for the first time.

The neighborhood kids are just as wholesome at first. They play rough games. Some of them are a little scary, but in a fun way. They are enjoying the springtime of life.

So, when events fly downhill to the depths that Ketchum descends, it's all the more shocking.

Ketchum leaves his reader emotionally exhausted. There is no happy ending. David, the narrator, is left permanently scarred by what he witnessed and by his passivity, allowed to happen. There is no recovery for him. There is no moving on.

The Girl Next Door is not for casual fans of horror. Reading this book without having digested many of the works of Stephen King, Robert Bloch, H.P. Lovecraft, Edgar Allan Poe or Dennis Etchison would be like getting on the biggest, baddest roller coaster at the amusement park without having ever ridden the bumper cars. One must be used to the shocks, the violence, and the depravity that is an important part of modern horror to venture into Ketchum’s masterwork. One must know what else is out there before they can measure The Girl Next Door against it because, while better horror books have been written, none have been so gripping.

The story is loosely based on the real life story of Sylvia Likens who was tortured to death by her aunt and neighborhood children in Indianapolis in 1965. Ketchum changes up quite a few things to make the story original, but the striking similarity is there. When you know that a real life teenage girl had to endure such tortures, it makes the book even more horrific.

For true fans and connoisseurs of horror, The Girl Next Door is a must read. It will leave you emotionally exhausted, doubting the morality of your fellow man, and completely worn out. However, this is all worth it to read such a masterfully crafted story so compellingly told. Jack Ketchum is a master of the craft with few peers.